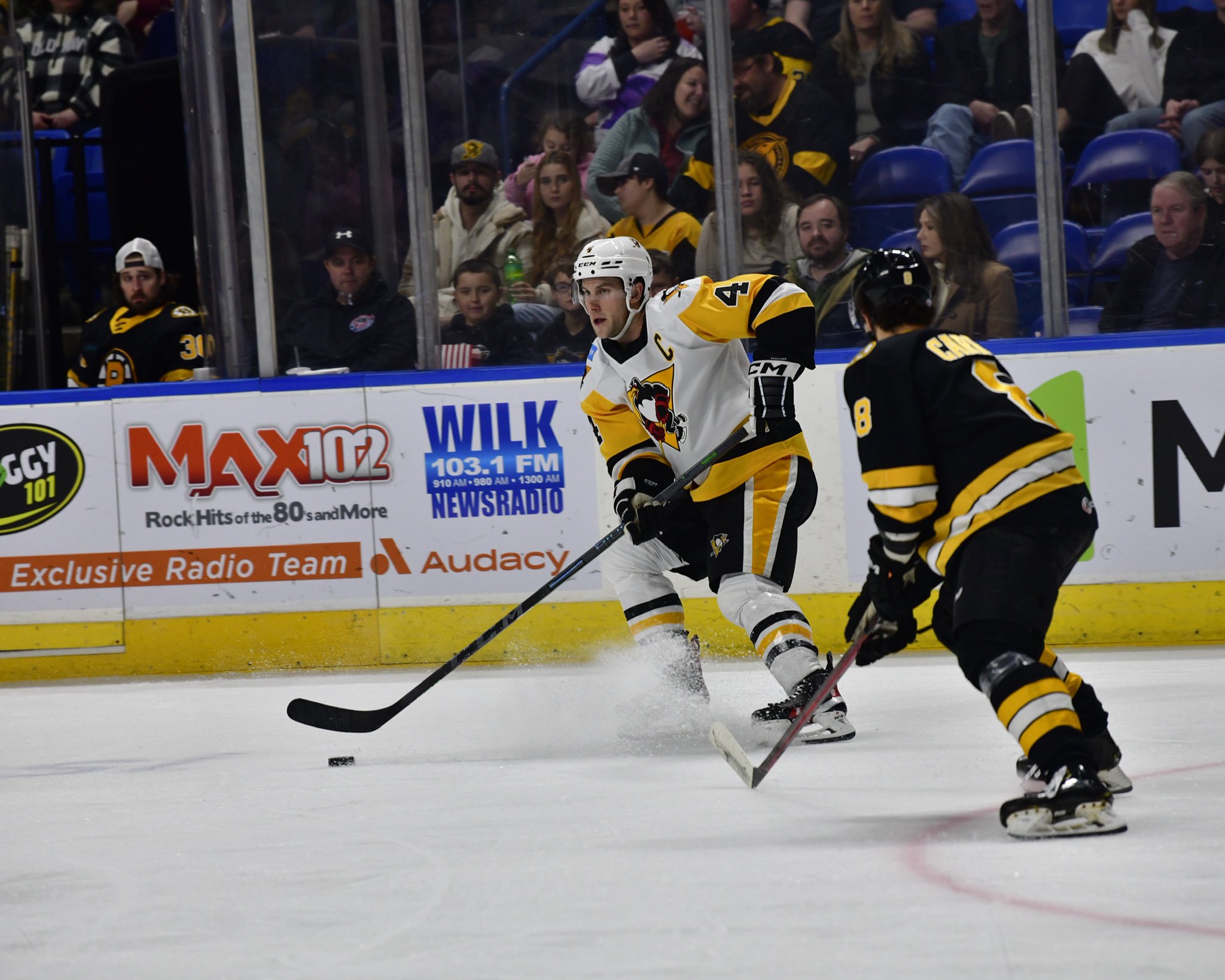 Both the Penguins and Bruins came into Friday seeking to get back on track, but it was Providence getting a 4-3 win.

WILKES-BARRE, Pa. – It was a heated Atlantic Division showdown on Friday at Mohegan Sun Arena as the Providence Bruins stopped in to take on the Wilkes-Barre/Scranton Penguins on their Pennsylvania road trip, and the matchup didn’t disappoint as the visiting Bruins held off the Penguins 4-3. Oskar Steen’s three-point night included the game-winning goal while Brandon Bussi made 36 saves to secure the win and break a three-game losing skid for Providence. The loss extended Wilkes-Barre’s winless streak to five games, with Providence tallying four goals on Dustin Tokarski, who finished the game with 23 stops.

All told, it wasn’t a bad night offensively for the Penguins, who opened the scoring with Sam Houde’s fourth goal of the season. The young forward, playing in his first full American Hockey League season, fired a rocket over the shoulder of Bussi to open the scoring on the power play. Houde is one of several young Penguins skaters to step up with the team missing several key regulars with three points in his last five games, and his contributions are important for the Penguins.

However, the Bruins would respond on their first power play minutes later as Georgii Merkulov found a rebound all alone on the left side of the net and popped it past Tokarski just in time to even the count at one. Oddly, both power play goals in the opening stanza were for too many men on the ice calls, and Merkulov’s sixth goal of the season came only 31 seconds into Providence’s first opportunity. Both teams put up double-digit shot counts in the opening stanza, but the score would remain even at one after twenty minutes.

The two teams traded goals in the second period as the Bruins struck on their second power play with Mike Reilly’s third goal of the season. The defender wound up with a big slap shot at the point off a feed from Jack Ahcan that had eyes for the back of the net to put the Bruins in front. However, if there was one Penguin player who was up to the task of cutting into the Bruins’ lead on this night, it was Valtteri Puustinen, who struck for his tenth of the season late in the middle stanza as he fired from an extreme angle and found twine to send the game to the final twenty minutes even at two.

The Bruins tallied twice in the third period, starting with a rocket from defender Connor Carrick for his third goal of the season. The offensively productive blue liner’s shot went through a mass of humanity in front of Tokarski with a little lift on the shot to get the Bruins back in front, and they’d add to the lead soon after. Vinni Lettieri took the puck in on a two-on-one rush and put a perfect pass onto the tape of Steen, who made no mistake for his sixth goal of the campaign. Although the goal looked to be an insurance marker at the time, it’d turn essential as the Penguins poured on the pressure with 13 shots in the final frame and tallied with Puustinen’s second goal of the game on the rebound. The Bruins held off the home team and escaped with a 4-3 decision on the road.

One of these two teams was destined to break their recent winless skids to get points on this night, and for the Bruins, it’s something they hope to build upon as they return to Hershey for their second game in their last three with the Bears. The Bruins were blanked for the first time all season in a 1-0 loss to the Bears on Wednesday and are looking to build upon their four-goal effort in tonight’s contest. Providence could pull to within four points of Hershey with a regulation win on Saturday night, a stark improvement to the eight-point gap they entered the weekend looking at.

The loss stings a little extra for the Penguins, who haven’t had much success in the back half of December. Although the team has picked up points in losses in extra time and have games in-hand on most of their division opponents, they’ve slid to fifth place as the Charlotte Checkers have heated up and passed them in the standings. The Lehigh Valley Phantoms and the Springfield Thunderbirds have pulled even in the standings with the Penguins with 31 points, and with the gap to as high as third place only three points off for all three teams. The Penguins will do battle with the Phantoms on New Year’s Eve with a heightened sense of urgency for both teams coming off of losses, as the winner will be ahead in the standings race.