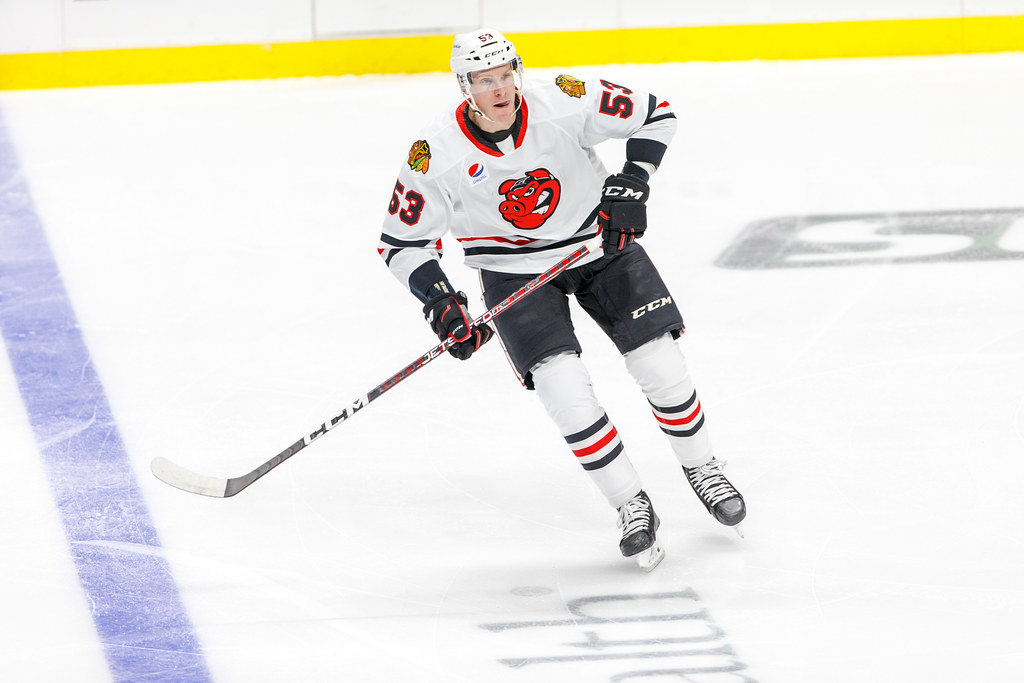 The Rockford IceHogs went with experience when setting up the 2022-23 roster.

ROCKFORD, Ill. – The Rockford IceHogs went with experience when setting up the 2022-23 roster. Among the veterans brought to Rockford this season is forward Buddy Robinson.

At 31, Robinson is one of the elder statesmen on the team. He recently skated his 500th AHL game. That milestone came when the IceHogs visited Texas on November 13 in a 5-4 IceHogs win. He trails only Rockford captain Garrett Mitchell (524 games) in age and AHL experience.

Originally signed by Ottawa as an undrafted free agent in 2013, the 6’6″, 230-pound forward has spent time with the Senators, Jets, Flames, and Ducks organizations before signing with the Chicago Blackhawks this past summer.

Two months into the season, Robinson (4G, 2A) is enjoying his current stop.

“I’ve been around the block a couple of times here, and a lot of new teams,” he said at Rockford’s weekly media session on Tuesday. “It’s been a great fit for me and my family so far. We’ve got a good team here, we’re getting things going in the right direction. It’s an exciting future this year.”

Robinson started the season in Chicago, playing one game with the Blackhawks before being assigned to Rockford. It wasn’t long before he was making a difference on and off the ice.

In his tenth professional season, Robinson has 124 goals and 141 assists in 503 AHL contests. His best AHL season came in 2017-18, when he posted 25 goals and 23 helpers for Manitoba, leading the Moose in goals and helping that team reach the second round of the Calder Cup Playoffs.

Robinson is a power forward who has hit double-digits in goals seven times in his AHL career. For the Bellmawr, New Jersey native, there’s a simple formula for scoring success.

“I’m a pretty big guy. I don’t know if anyone’s noticed,” Robinson said jokingly. “(I’m) a tall guy out there, so go out there and play physical, play hard. Get the puck up and down the wall and get to the front of the net, just be a presence in front of their net. That’s where I’m going to score my goals. You’ve seen it; just pucks off me getting into the net. (Being) responsible defensively, kill penalties, be out there the last minute of the game blocking shots. Everything I can to be a physical force out there for the team and maybe chip in a few goals here and there, too.”

On the scoresheet, Robinson had his best game of the season on November 16 in Grand Rapids. He led the IceHogs with five shots on goal and contributed a goal and an assist in Rockford’s 5-1 victory. The Hogs are 7-6-0-1 entering Wednesday night’s game with first-place Milwaukee, but Robinson likes where his team is heading.

“Even when we’re losing games, we’re still scoring four or five goals, so it’s encouraging,” he said. “We’re just gonna clean up the d-zone a little bit; I think we have a good season ahead of us. Our team is really deep right now. You’ve just got to find your role and find a good line that’s working right now. You just go out there and work hard and do what I can to help the team.”

What has Robinson excited is the veteran leadership on the IceHogs roster, as well as Rockford’s coaching staff, which includes Sorensen and assistants Rob Klinkhammer and Jared Nightengale.

“Leadership all the way down to coaching and how they’re talking to us every day,” he said. “What they’re bringing to the table and the way they’re running practices. Just the way they’re communicating with us and the skill that we have on our team.”

Robinson admits that the host of veteran faces on the club has taken some time to mesh.

“Chemistry is always hard to build,” he said. “We’re around .500 right now, so lines are changing every other day. You’re just trying to find that fit; right now, I just feel more comfortable on the ice, kind of getting my feet underneath me a little bit more every game, and it’s been great.”

How does a veteran player help build that chemistry?

“It’s about forming relationships,” Robinson explained. “You want to play with the guys you’re friends with, so you go out for lunch or grab dinner on the road with guys and you just get to know people better, and it makes playing with them a lot easier. Where they’re going to be, what their habits are like. Bonding with them off the ice is just as important as scoring goals with them on the ice.”

For the remainder of the season, Robinson has several goals in mind. That includes playing winning hockey as well as getting back to the NHL, where he has three goals and six assists in 54 career games.

“I don’t think I’d still be playing the game if it wasn’t a dream of mine,” he admits. “You always want to crack the NHL. You want to be in the best league. For me, it’s every day, coming here, right now, in Rockford. We’ve got a good thing going here and I want to do everything I can to help this team win. At the same time, you’re also trying to make it to the NHL, the best league in the world. As athletes here, every one of us is trying to do the same thing. We push each other, we’re getting a little bit better each day. My hope is that every one of these guys gets to the NHL at one point.”

You can follow Jon Fromi on Twitter @FPHIceHogs! For the latest news on the American Hockey League, be sure to follow our AHL team and listen to The Holy GrAHL Podcast each week!