BIRMINGHAM, Ala. – It’s often said, “There’s no place like home.” For the Birmingham Bulls this weekend, there wasn’t a truer statement. 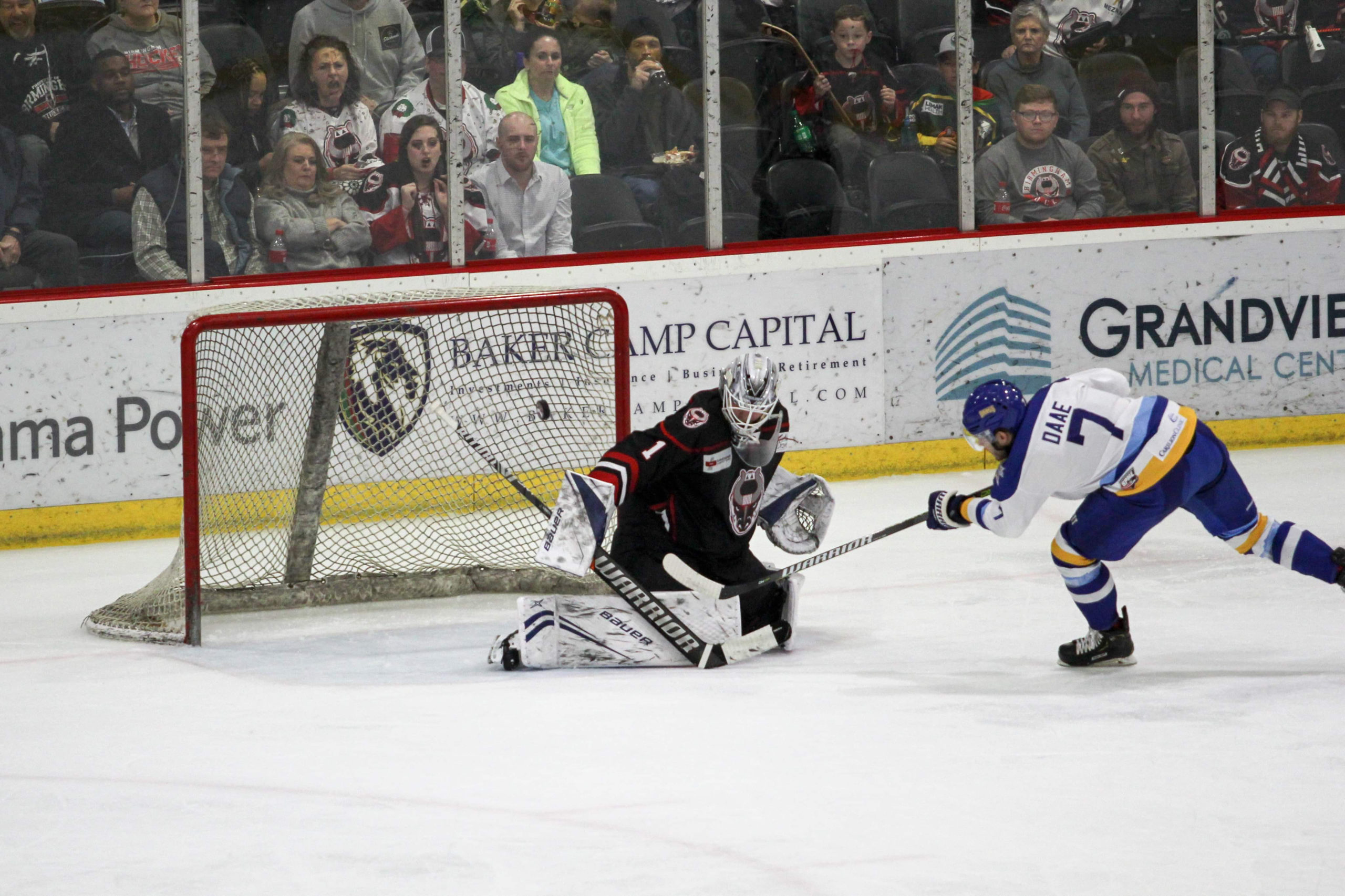 BIRMINGHAM, Ala. – It’s often said, “There’s no place like home.” For the Birmingham Bulls this weekend, there wasn’t a truer statement. Following a 5-4 loss on the road to the Roanoke Rail Yard Dawgs, the Bulls returned home needing a win to snap a five-game losing streak.
Before the game, it was announced that Birmingham had signed goaltender Austin Lotz. Lotz joined the team and was immediately pressed into action, being given the start less than eight hours after joining the Bulls. It was a decision that turned out to be a spark the home team had been missing.
The first period was scoreless, with neither team able to cash in on a pair of power play opportunities with both Lotz and Roanoke goalie Jake Theut making outstanding saves. In the second period, the goaltending duel would continue to just past the halfway mark of the period. A shot from Lane Valimont would bounce off the pads of Theut where Jacob Barber was waiting to knock in the rebound, giving Birmingham a 1-0 lead.
Following a take down on a breakaway, former Bull Austin Daae had a chance on a penalty shot to even the score up. His backhand attempt went wide, keeping the Birmingham lead at 1-0. Another new face in the lineup, Joe Deveny, deflected a rebound passed Theut to score on the power play late in the second period to extend the Bulls lead to 2-0.
The final period of the night saw the whistles blowing often, and the Bulls tacking on a pair of goals. The two teams would combine for 42 penalty minutes in the final period. Cole Golka scored on a breakaway. The breakaway came as he was exiting the penalty box for a slashing call. His first shot was blocked by Theut, but Golka tapped in his own rebound for his second goal of the season.
It would be the other Cole in the Birmingham lineup that would finish out the scoring on the evening. Former Rail Yard Dawg Aaron Huffnagle hit Cole Stallard with a pass at the top of the crease that the kid from Woodstock, Georgia would hammer past Theut for the goal. That goal extended Stallard’s season high points streak to four games.
The win gave the Bulls a weekend split with Roanoke. There was more than a difference in location between the two games. On Friday evening, the Rail Yard Dawgs went 3-for-6 on the power play in a game decided by one goal. Saturday night saw the Birmingham Bulls make some adjustments, and the SPHL’s leading power play coming into the game went 0-for-6 with only five shots on goal with the man advantage.
Birmingham Head Coach Jamey Hicks on the penalty kill difference between the two games:

“They got shots through last night. we just went to the video and created a different system for today, and it seemed to work for us.”

On the debut of Austin Lotz:

“Austin played very well tonight, and that’s what we expect from him. He’s got a lot of games in the East Coast League. he’s a tremendous person and we’re very fortunate to have him.

Austin Lotz on his remarkable debut in Birmingham:

“Yeah, it went well. had a couple of crazy days traveling, and it’s nice to get the first one behind me.”

The signing of Lotz was the big news before the game; after the game, the talk was about the return of a former Bull to the lineup. Taylor Dickin is returning to the Birmingham Bulls on Sunday afternoon. Dickin, a fan favorite in Birmingham, had been a key contributor for the Bulls over the last two seasons. In 87 games, the Winnipeg, Manitoba native scored 20 goals and assisted on 49 others. His plus-15 rating in 2018-19 was third highest on the Bulls roster.
Hicks on the return of Dickin and Russell Jordan coming off the injured reserve list:

“They’re big additions; we’ll be happy to have them both in the lineup. it gives us some size and some veterans back with us.”