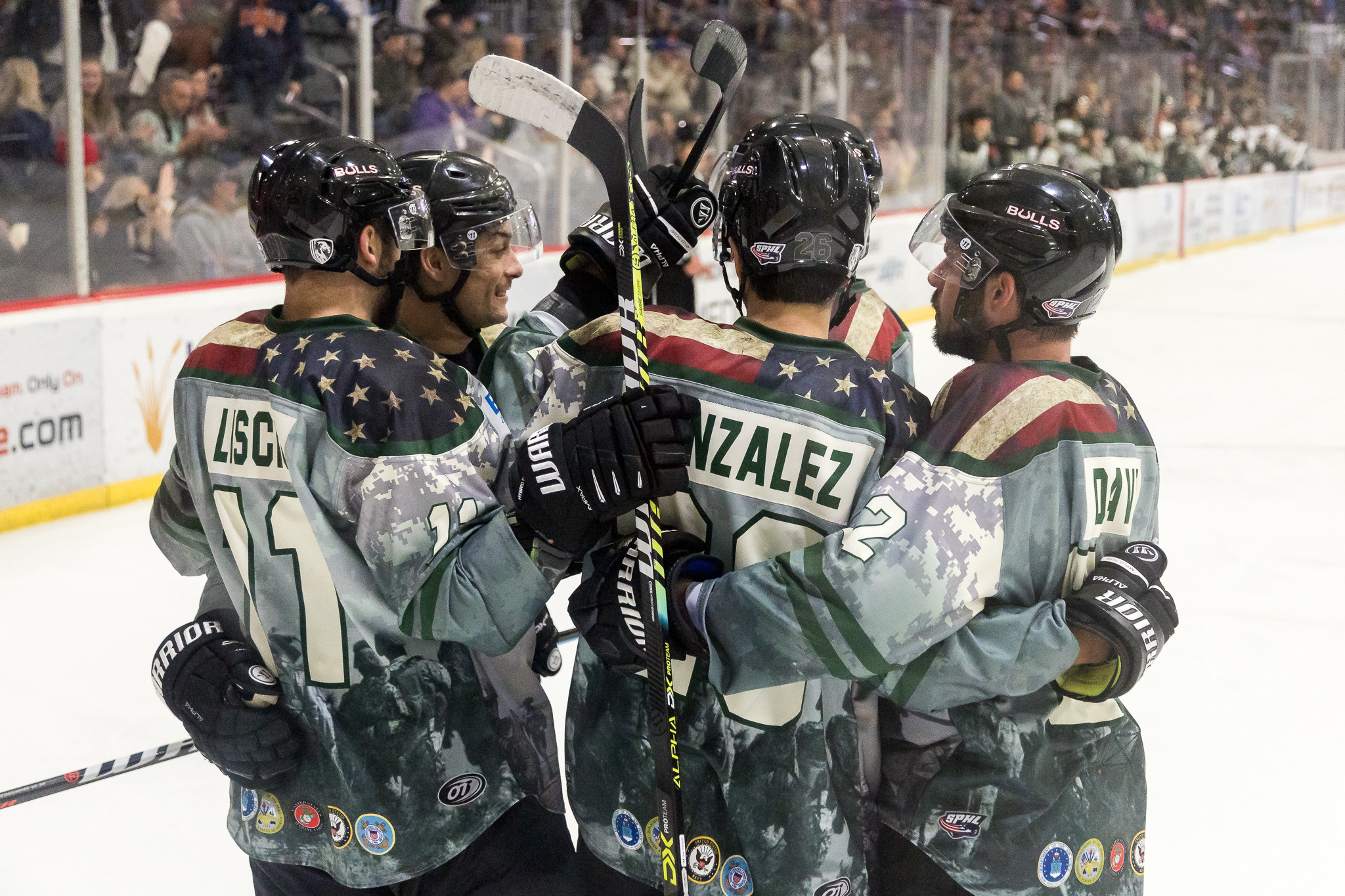 Bulls Bounce Back at Home

Bulls Bounce Back at Home

PELHAM, Ala.- One night after the Fayetteville Marksmen came into Birmingham and dominated the Birmingham Bulls in almost every aspect of the game in a 6-2 victory, the Bulls bounced back in a big way.

Saturday night at the Pelham Civic Complex, Mike Davis and company put on a show for the fans defeating the Marksmen 8-5 in a high scoring affair.

The Bulls came out buzzing in the first period and just 1:14 into the opening period Stephen Alvo put the Bulls on the board. Considering the Bull’s early game struggles, this quick goal was sure to spark the team that has dropped their last four straight games and has only registered one win on the season. In the first five minutes of the game, this looked like a completely changed team from what we had seen previously. Something changed, though, midway into the period. The bottom fell out when the Marksmen scored four unanswered goals to finish the period.

With the second period getting underway, you could feel the disappointment from the home crowd as the Bulls took the ice down 4-1 after a promising start. That is when things changed though, just 21 seconds into the second period, newly appointed team captain Davis buried a powerplay goal. All of a sudden, this team had life again. Davis did it again just under three minutes later, and the three-goal lead was now just a one-goal lead. The Bulls battled hard and were winning most of the battles in the corners throughout the period. At the 11:38 mark in the middle frame, Danny Liscio tied things up. That disappointment you could feel in the arena was now changed to excitement. 13 seconds later, Kyle Gonzalez sent a slapshot from the blueline zipping past Marksmen goaltender Stefano Durante to give the Bulls the lead back in the game. Birmingham took a 5-4 lead into the locker room after two periods and couldn’t feel better about their play to this point. 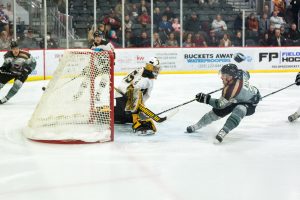 When the third period got going, the Marksmen were playing with determination. When they went on the powerplay after a holding call on Birmingham’s Liscio, they jumped at the opportunity to break the Bull’s momentum. Taylor McCloy scored for Fayetteville, and things were all tied up at five goals apiece. In previous games, this goal would be the one where the Bull’s spirit gets broke. The team would start taking bad penalties, only digging themselves deeper in a hole, but not tonight. Fan favorite and recently re-acquired Kasey Kulczycki found the back of the net at the 7:46 mark of the third period. That goal would be the eventual game-winner, but the Bulls weren’t done just yet. Davis completed the hat trick on a breakaway chance. It was only fitting this happened on a night that fans received a free hat when they came into the building for military appreciate night. The night’s final goal belonged to CJ Hayes just over a minute after Davis netted his third of the night. 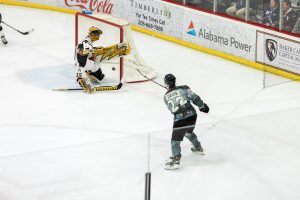 So what went right on Saturday night? With the exception of the sloppy first period that featured two bad penalties by the Bulls that resulted in powerplay goals against the rest of the game was very discipline hockey. Even when provoked, we didn’t see anyone lose their cool in the moment. Secondly and probably more importantly, the team played as a team and never quit.

After the game, coach Craig Simchuk said, “Great to see the no quit in the boys tonight. Our captain stepped up and led the way, and the team followed.”

It’s also worth noting that even though Bulls netminder Hayden Stewart let in 5 goals, he still finished the night with a 90.19 save percentage after facing 51 shots on the night. That was good enough to earn him second star of the night.

Next up for the Bulls is a Sunday afternoon matinee as they travel up the road to Evansville to face a Thunderbolt team that lost Friday night 4-1 to the Knoxville Ice Bears and again lost 4-1 to the red hot Quad City Storm on Saturday night. The last time these two teams faced off, it took overtime to decide a winner when Evansville won at the Ford Center 4-3.