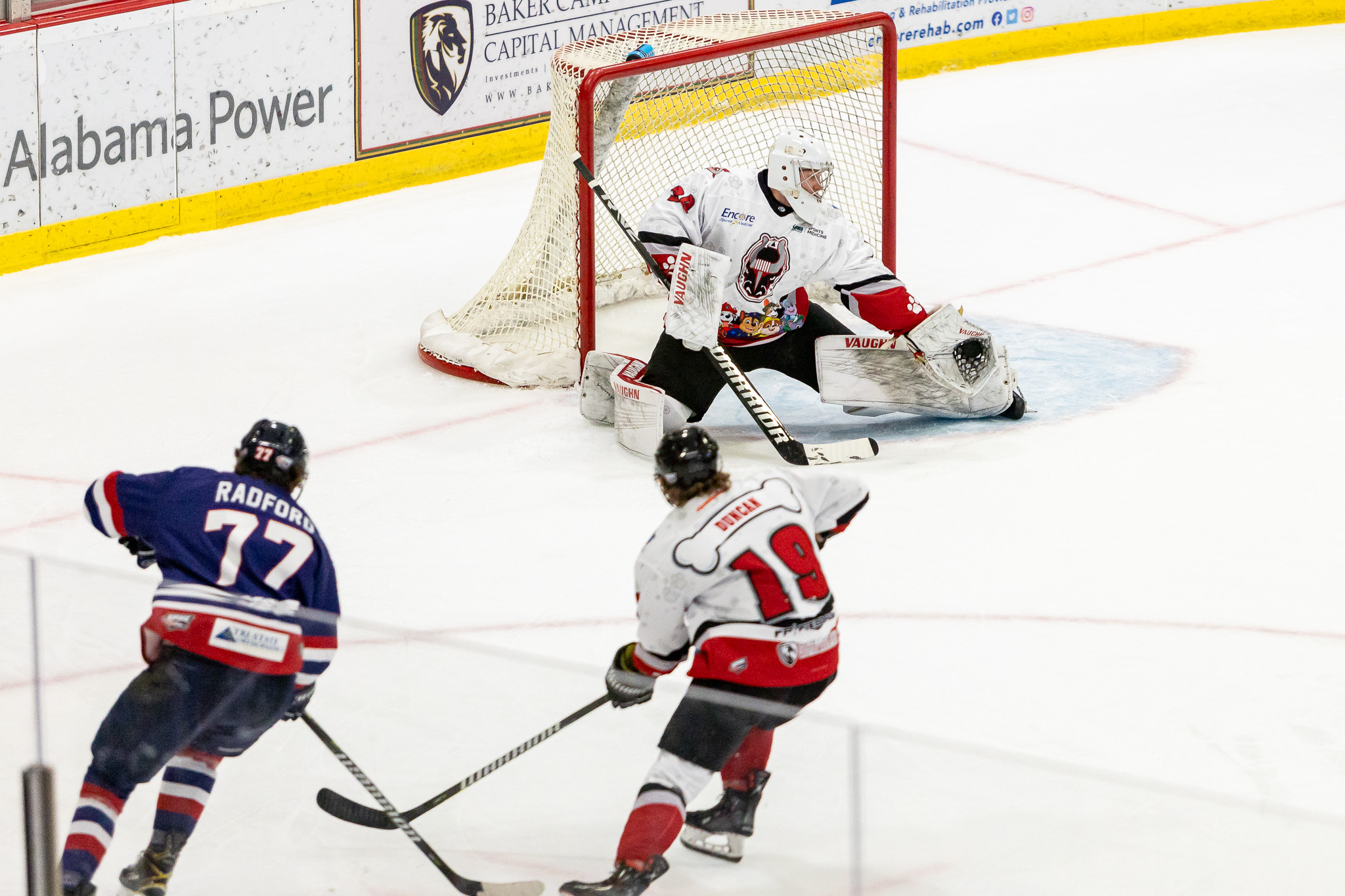 The Birmingham Bulls desperately needed four points over this past weekend to stay within reach of the playoffs. They accomplished exactly that.

PELHAM, Ala. – The Birmingham Bulls desperately needed four points over this past weekend to stay within reach of the playoffs. They accomplished exactly that, although they did let the Evansville Thunderbolts salvage one point on Friday night when the Bulls defeated the Thunderbolts 2-1. Birmingham has closed the gap to 13 points from eighth place in the standings with this weekend sweep. The Thunderbolts currently sit in that eighth spot, but are tied with the Pensacola Ice Flyers, who sit in seventh with both teams having 39 points. Saturday night’s victory didn’t come easily by any means. Still, the Bulls did pull it together in the second period and come out with a 3-1 victory.

The first period was all about the Evansville Thunderbolts. Evansville came out with something to prove and dominated the Bulls in every aspect of the game. Just over three minutes into the game, Tyson Kirkby got the scoring started in the game for Evansville. Kirkby gathered the puck off the far boards at the blue line and sent a laser at Hayden Stewart, beating him on the short side, and things were not looking good for the Bulls early on.

A half-minute later, Birmingham got their first chance at a powerplay when Charles Barber was called for interference. Birmingham was never able to get anything going on the powerplay, and the score stayed 1-0. Birmingham would have to kill off two penalties of their own in the period, and the penalty kill that has really turned things around in the second half of the season was successful.

Evansville never gave the Bulls space and dominated the opening period, outshooting the Bulls 17-3. Two of the Bulls’ shots on goal came in the final two minutes of the period. Stewart kept the Bulls in the game despite being locked down everywhere on the ice by Evansville, and the team headed into the locker room only trailing by a goal. 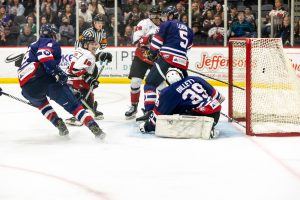 A completely different Birmingham team came out of the locker room in the second period, and things started to look up. The scoring chances were coming, the passes were landing on the tape, and Stewart stayed the same. It wasn’t that Evansville loosened up defensively, the Bulls were just finding those holes in the defense and taking advantage of them.

Roughly 11 minutes into the middle frame, Birmingham’s Frank Sullivan took a shot from the point that bounced off Thunderbolt netminder Brian Billett’s pad. Billett could not locate the puck, and Matthew Hobbs jumped into the slot and chipped the puck up and over Billett’s pad to tie things up at one goal. Just under five minutes later, Bulls rookie Carson Rose collected a rebound off a shot from Stephen Alvo and sent a backhanded shot into the back of the net, giving the Bulls their first lead of the night and first lead in regulation all weekend. 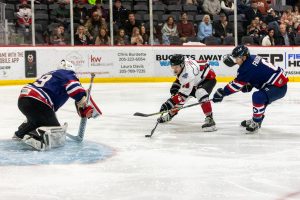 The third period was a completely different style of play than we had seen all night. Things got physical very quickly. The Bulls found themselves with a chance to extend their lead early on when Barber received his second minor penalty of the night. This time, it was for tripping. The best chance on this powerplay came for the Thunderbolts, though. Austin Plevy out hustled the Bulls in his offensive zone and moved in on a breakaway to tie things up. Plevy moved in on Stewart’s stick side with a Bulls defender in tow. Stewart came out of the blue paint to meet Plevy, taking the angle away and keeping the score 2-1.

With 2:34 remaining in the game, Evansville decided it was time to pull Billett for the extra attacker. 44 seconds later, a newcomer to the Bulls roster, Alex Cohen, skated into the offensive zone along the right-wing boards and sent the puck into the empty net, sealing the deal for the Bulls. Birmingham got their second win in as many games. 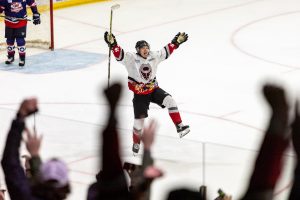 Hayden Stewart, who has been red hot in the net for Birmingham, played another stellar game stopping 46/47 shots which put him at 76/78 on the weekend along with the two victories. Scott Donahue’s goal streak came to an end on Saturday night as well. After scoring goals in each of his last three games, the Bolts were able to keep him off the scoreboard.

The Bulls have 19 games remaining on the schedule as they push to try and find their way back into the playoff race. The two teams in front of them that it seems most logical for them to catch are the Evansville Thunderbolts and the Pensacola Ice Flyers. They both sit 13 points ahead of them in the Standings. Birmingham will see the Thunderbolts three more times this season, two of which will occur at the Ford Center in Evansville. Pensacola is on the schedule two more times this season, once in late February and for the final time on March 4, with both games being played at the Pelham Civic Center. That’s ten points in head-to-head matchups, The Bulls do have one game in hand on Evansville, but the Ice Flyers hold a game in hand on the Bulls.

So the biggest question coming out of this weekend is, can the Bulls finally find some consistency and make a real push for the playoffs as the regular season is dwindling down?