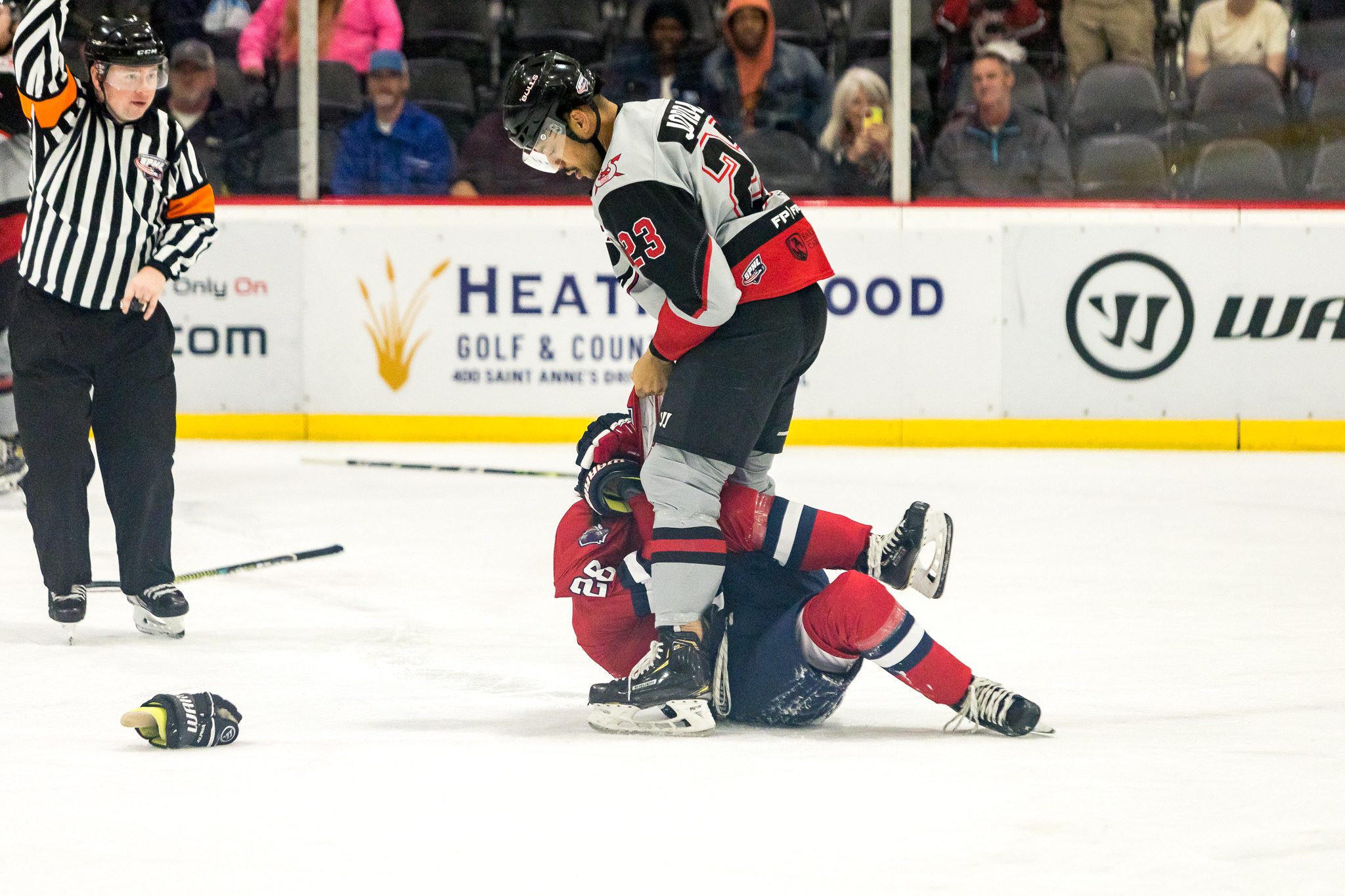 The feeling heading into this game was that it was supposed to be an easy win; the Mayhem dropped their first 11 straight games to start the season

PELHAM, Ala. – The Birmingham Bulls losing streak is now at six games after falling 3-0 to the Macon Mayhem on Thursday night. The feeling heading into this game was that it was supposed to be an easy win; the Mayhem dropped their first 11 straight games to start the season and struggled to get things going. However, Macon came off their first win of the season on Saturday night at home against Evansville and had other plans.

Birmingham started Austin Lotz in net Thursday night, and Lotz didn’t play badly despite the final score. He stopped 23 of 25 shots and looked comfortable in net.  The first period was an offensive struggle for both teams, and it appeared that it was going to be a long low scoring night. The Bulls had to kill off three penalties. The penalty kill unit looked solid against a Mayhem team that, like the Bulls, has struggled to get any consistent offense going. Late in the first period, though, with 36.9 seconds remaining, a defensive breakdown by Birmingham resulted in a Zak Lambrecht goal for the Mayhem when he beat Austin Lotz as he was coming across the crease.

Heading into the second period, Coach Craig Simchuk wanted his team to clean up the “stupid mistakes” and battle their way back into the game. Things got really physical in the middle frame. You could see some of those mistakes Simchuk referred to had been resolved, but neither team was able to add to the score, so it was 1-0 still heading into the third. In the third period, the Bulls put pressure on Mayhem goaltender Dillon Kelley sending 16 shots his way. Still, Kelly stood tall in net and denied entry of every puck to the back of the net.

The story of the season for the Bulls has been low offensive production, and this game was no different despite out-shooting Macon 38-26. Carson Rose and Russel Jordan both had some pretty big chances late in the third. Still, they ran into a goaltender that had tons of confidence after blanking Birmingham through the first two periods. Adding insult to injury, it was the third time in the last four games the Bulls have been held scoreless, with the previous two times coming against the Knoxville Ice Bears. In their previous four games entering Friday night, the Bulls have scored just once.

With this being the first game of a 3-in-3 weekend for the Bulls, they will have to shrug this one off and move forward to a game tonight against the Knoxville Ice Bears. The Ice Bears come into Pelham to face Birmingham for the third straight time, and the past two games have been very one-sided, with Knoxville shutting out the Bulls both times.

Assuming reigning SPHL player of the week, goaltender Jimmy Poreda will be in net for the Ice Bears Friday night Birmingham will definitely have their work cut out for them on teddy bear toss night. The looming question is…will Bulls fans get to throw teddy bears on the ice during the game or after?