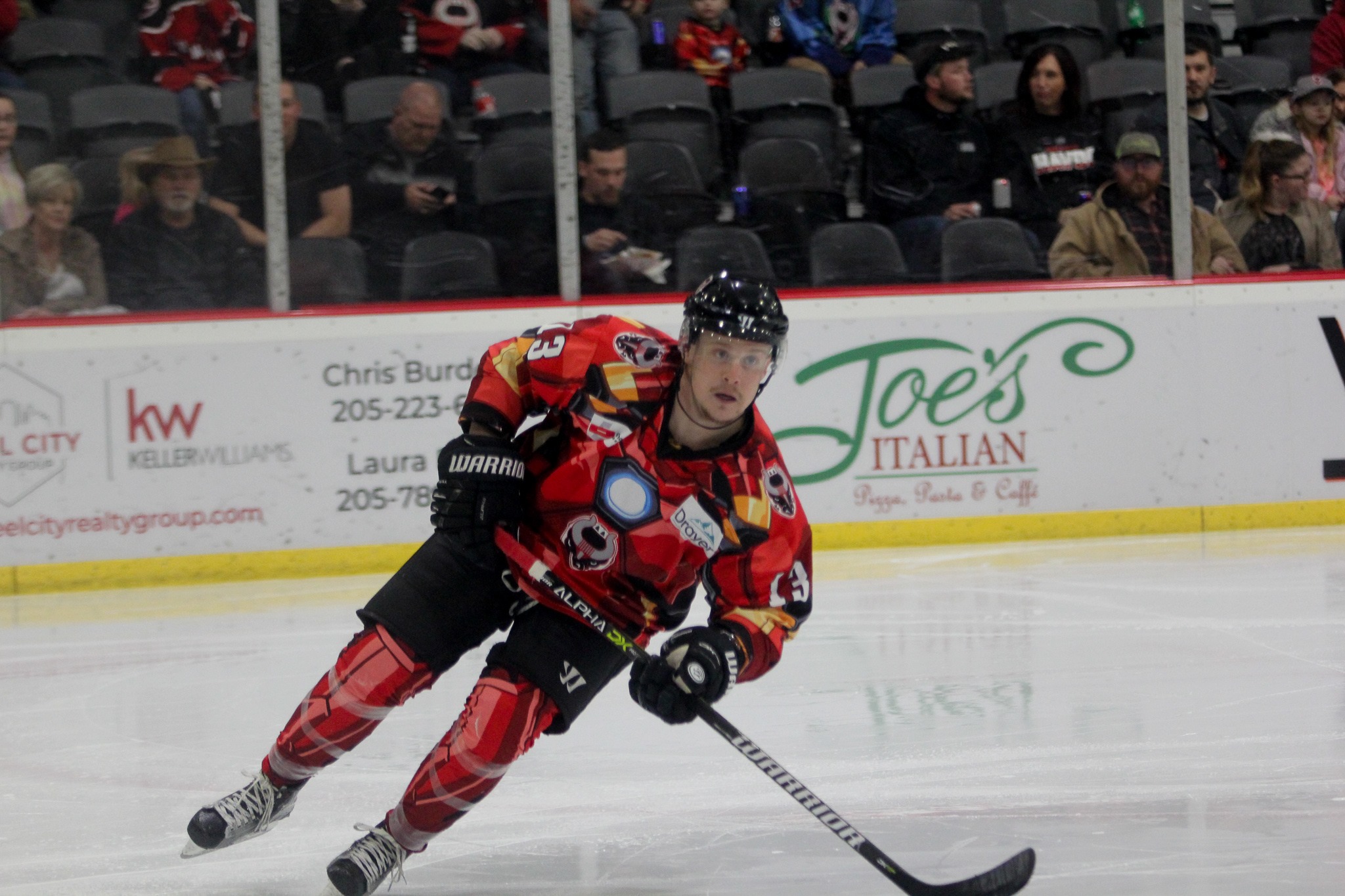 BIRMINGHAM, Ala. – Coming into the weekend, the Birmingham Bulls began the homestretch of the season with two crucial home games. On Friday night, things went according to plan, Saturday evening, well that’s another story.
Friday evening was the final regular-season game against the Huntsville Havoc. Birmingham was playing for pride and points as the Havoc clinched “The Alabama Cup” two weeks ago with a sweep of the Bulls.  As has become the norm when these two teams faced off, the game was physical. Birmingham took the lead midway in the first period when Mike Davis fed a pass between the legs of Huntsville’s Saverio Posa to Peter De Coppi for the 1-0 lead. The Bulls took that 1-0 lead to the locker room after out-shooting the Havoc 13-4 in the first period.
The second period, was once again, not one of Birmingham’s finer 20 minutes of play. Coming into Friday night’s game, the Bulls had been outscored 45-32 in the sandwich period. When the teams went to the locker room for the second intermission, that total had gone up to 47-32. Huntsville’s Scott Trask hammered in a rebound to tie the game 1-1, and Nolan Kaiser gave the Havoc a 2-1 lead with his third power-play goal of the season.
In the third period, it was the effort of a captain that tied the game up for the Bulls. With only 5:51 remaining in the game, Josh Harris won a faceoff in the Bulls offensive zone, the puck went back to Cole Stallard who returned the pass to Harris. Harris fired off a slap shot in traffic to beat Max Milosek. In the final five minutes, the Havoc would pepper Birmingham goalie Artt Brey with no luck, sending the game to overtime.
Against the Huntsville Havoc, overtime has not been friendly to the Bulls. Counting the 2018-19 President’s Cup finals, Birmingham and Huntsville have gone to overtime four times. The Havoc were 4-0 coming into Friday night. Just like the four previous times, the Havoc quickly applied pressure, within the first minute of overtime, Brey had to make two quick saves. As the puck went down to the other end of the ice, Stallard fired a shot in on Milosek, who made the initial save, but Kasey Kulczycki was there to knock in the rebound and give Birmingham a 3-2 overtime win.
Talking with coach Jamey Hicks about picking up the overtime win and the two points against Huntsville:

“Anytime you can beat Huntsville at home is great, I thought we played pretty good the whole game, it shows you where you can get to, but the good teams are consistent with it and that’s what we’re struggling with right now.”

The win set up Birmingham with a chance to gain some separation from the pack battling for the final two playoff spots.
Entering Saturday night’s contest, the Macon Mayhem the Mayhem found themselves in tenth place in the standings, but only trailed Birmingham by two points for seventh place.
The first period of the game was sluggish on both sides, with neither team scoring a goal and the Bulls out-shooting the Mayhem 10-9.
Unfortunately for the 2700+ Bulls fans in attendance, the second period woes would jump up to bite Birmingham again. Macon’s Caleb Cameron scored a short-handed goal 10:38 into the period to give the Mayhem a 1-0 lead. Cooper Jones made it a 2-0 game, and Eric Ylitalo scored on the power play. By the time the Bulls regained focus, the Mayhem had a 3-0 lead. Mayhem netminder Michael Stiliadis would pick up his second shutout of the season, stopping all 33 Bulls shots.
After the game and the obvious disappointment of the results, Hicks wasn’t down on his team and was fairly upbeat. “We didn’t play terrible, everything was under control, but we gave up three goals in a short period of time and you just can’t do that this time of year,” Hicks said.
The Bulls went 0-8 on the power play on the weekend and are scoreless in their last 13 chances on the man-advantage.

“Obviously, our power play is holding us back a little bit, we’ve got to start scoring some power-play goals, take advantage of the extra man,” Hicks said.

The win for Macon moved them from tenth in the standings into a tie for seventh with Birmingham.
The Birmingham Bulls now hit the road for their lone midwest swing of the season. The Bulls will travel for a pair of games against the Peoria Rivermen Friday and Saturday nights. Then, thanks to some rescheduling, their only appearance in Moline, Illinois against the Quad City Storm Sunday afternoon.
With every game more important than the last now, I asked Hicks about the tough road that lays ahead this weekend:

“It’s gonna be a grind, but you know you accept those and you meet it head-on. That’s why the guys play, for a weekend like this. It helps decide where we end up, it’s a grind but enjoy it. That’s what I tell the guys, enjoy playing in front of 3,000 on the road or 4,000 people. It’s really important to embrace what’s going on, you don’t shy away from it.”