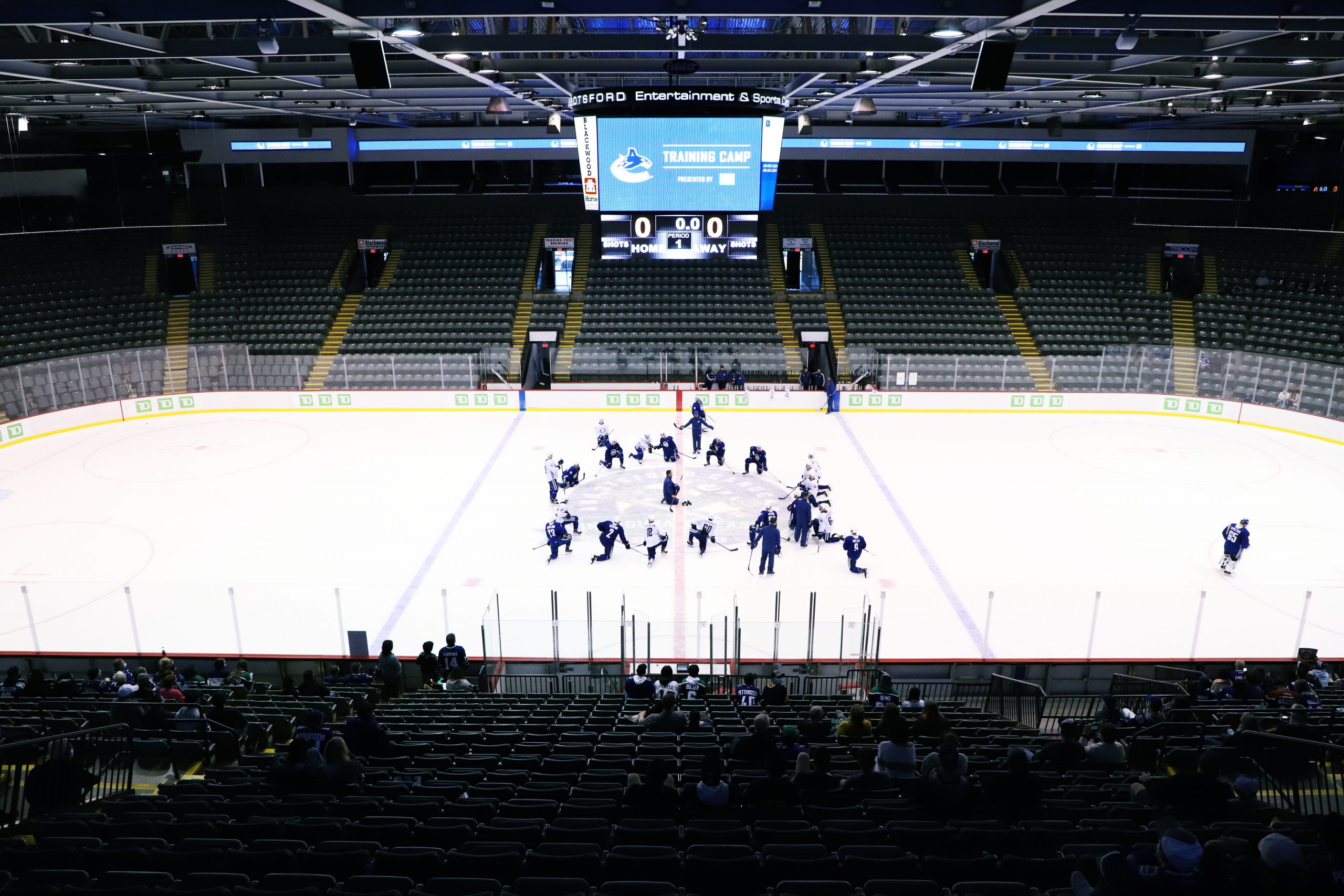 VANCOUVER, BC – April 19th, 2014 was the last time an Abbotsford AHL team played a regular-season game.

Under a different name, with different colors and a different affiliation, AHL hockey has returned to the lower mainland. Though the Canucks may have dropped their inaugural game to the Bakersfield Condors, fans of the team have much to look forward to this year.

The first tilt in Abbotsford Canucks franchise history came against the affiliate team of the Edmonton Oilers, whom the Vancouver Canucks opened their NHL season against. Heading into hostile territory, this would be the first time the team took to the ice as a unit.

Here's how we line up in our first game:

▶️ Klimovich is the 284th player in AHL history to play as an 18-year old.

▶️ Kannok Leipert is the first Thailand-born player in AHL history to play a game. pic.twitter.com/nSVF4gNEAl

A side note: the Canucks ran with three assistant captains tonight. Early reports suggested that Ashton Sautner, a fixture of the Vancouver organization, would be the favorite to earn the C, so perhaps the team is waiting for their return home to unveil the first captain in franchise history.

After a microphone issue with the anthem singer, the puck was dropped for the Canucks’ first game in franchise history. Right off the bat, it was the Condors that dictated play. Early pressure and a power-play generated plenty of shots, but Michael DiPietro was equal to the task.

With the first penalty kill in franchise history complete, the Canucks got some chances of their own. 2021 second-round pick Danila Klimovich showed off his talent in brief spurts, cool under pressure, and hands like butter. The first line of Justin Bailey, Sheldon Dries, and Sheldon Rempal was the best early on, generating the most sustained zone pressure the Canucks would get.

Unfortunately, despite DiPietro’s finest efforts, it was the Condors that would strike first. The Canuck netminder made the initial save through traffic, but James Hamblin was first to the loose puck as he buried it on a spinning backhander. Coming at 16:08, it put the home side up 1-0 with the flow of the play at their backs.

Abbotsford would manage to get some zone time in the final moments of the period, but the first quickly came to an end, being outshot 11-3. While the new kids on the block certainly were hustling, there were many sloppy plays, from missed passes to breakouts going wrong. It felt like a constant chemistry experiment, the lines trying to click and mesh with each other.

#ABBvsBAK | Some late pressure by the @abbycanucks but nothing doing. Buzzer goes to end the first period of #AbbotsfordCanucks hockey, and they're trailing the Condors 1-0. Shots 11-3 favouring Bakersfield. #Canucks #abbycanucksdebut

That was sort of to be expected with this team, though. With no preseason and prior action to this game, there were to be growing pains. The Canucks certainly didn’t look brilliant, but they did not look bad.

Whatever Trent Cull said during the intermission seemed to spark his team. Abbotsford came out of the gates with speed and aggression, getting into Bakersfield territory and generating chances. It didn’t take long before the first goal in franchise history was scored.

Here is our first goal EVER ? Even more special that a BC Boy scored it. Jarid Lukosevicius gained some fans in Abby!#AbbotsfordCanucks pic.twitter.com/QCZlF5WveH

Jared Lukosevicius potted in a wrister from a broken play, the Squamish BC native etching his name into Canuck history. The goal came at 2:18 in the second. It felt like a jolt of energy was pumped throughout the entire lineup. Abbotsford would keep coming, nearly leveling the shot count. Eventually, they earned themselves a powerplay to try and keep the good vibes going. That was when William Lockwood took a crosschecking minor halfway through.

Bakersfield would make the Abbotsford pay for the lapse, as it was former Vancouver Canuck Adam Cracknell that blasted a one-timer past a lunging DiPietro.

Instead of folding, the Canucks took the challenge head-on and continued to go on the attack. Though he showed moments of inexperience, it was the young rookie Klimovich that opened his AHL account.

Being at the right spot at the right time, the 2nd rounder easily slotted it past Stuart Skinner to knot the game right back up less than a minute later. Already, the game was becoming exciting.

#ABBvsBAK | Small break in the play to update the stats. 9:46 left in the second, 2-2 hockey game. Shots 13-10 for the @Condors. Game's picked up, Lukosevicius picks up his 2nd point of the night on Klimovich's first goal. #AbbotsfordCanucks #Canucks #abbycanucksdebut

A couple of dicey moments would ensue, as the Abbotsford special teams really had to step up. With Carson Focht and Ashton Sautner heading to the box, the Canucks faced their first 5-on-3 penalty kill. They fought admirably and were able to get out of it scot-free thanks to some excellent netminding by Mikey DiPietro.

Perhaps spurred on by the kill, Abbotsford would tally their third goal of the frame courtesy of Justin Bailey. Sheldon Rempal battled hard in the corner boards before hooking the puck right to Bailey, who had drifted in front of goal. He easily snapped it by Skinner to give the Canucks their first-ever lead in a hockey game.

Justin Bailey's first of the season to give us our first ever lead!

A lot of firsts happening tonight in Bakersfield ?#AbbotsfordCanucks pic.twitter.com/CNiK0COlwn

The period would draw to a close with a 3-2 lead. It was a much better period for the Canucks, having found their scoring touch for three goals in the period. There were concerns, though, as momentum did not seem to favor the new kids. Michael DiPietro was much of the reason Abbotsford enjoyed the lead they did, but for how long could they go on being outshot and out-chanced?

As it turned out, not very long.

Bakersfield wasn’t going to let themselves get pipped so easily during their home opener. Just two minutes in, Sautner would turn the puck over in his own corner. Seth Griffith would let loose a blast from the point, which DiPietro saved through plenty of traffic, but Yanni Kladis pounced on the rebound to knot the game right back up.

To make matters worse, just 39 seconds later, Cracknell tallied his second of the game off of some poor team defense by the Canucks. In just a matter of moments, the game turned on its head with the Condors leading by one.

Though Abbotsford tried to mount a comeback effort, they got in their own way with poor discipline. Minor penalties seemed to halt any flow or rhythm the team generated. Though their penalty kill held up strong, it didn’t help that they still spent most of the time in their own zone. DiPietro once again had to be strong to keep the deficit to a single goal.

It proved too much to overcome. With the net empty, Sheldon Dries sent a wild pass into the middle of the ice that Luke Esposito easily read. The Condor made no mistake and fired it into the yawning cage, icing the 5-3 win in their home opener.

Though I’ve mentioned him in a couple of bad situations, Sautner and his partner Jett Woo were a surprisingly good pairing. For the most part, they were solid in their own end and looked not out of place at all. Barring a few communication details to hash out, this pairing could have potential.

#ABBvsBAK |
– The Canucks found themselves hemmed in their own zone at times, unable to break the puck out. Execution needs to be sharper
– For context, no preseason, so really the first action these guys have had.
– Not afraid to play physical
2/

#ABBvsBAK |
– Loved the effort throughout the lineup. Have to be better to win games though
– Want to see more of Woo – Sautner. Makings of a good pairing.

It's been a pleasure to tweet tonight, catch you all tomorrow at 5 pm against the @ontarioreign. #AbbotsfordCanucks

The Canucks fought hard but came up short, a learning experience for everyone. It was the franchise’s first game and first loss but still a tremendous step for all involved.

There’s no rest for the weary, as the Abbotsford Canucks return to action Sunday against the Ontario Reign. They look to bounce back from a tough defeat and earn their first win in franchise history. Puck drop set for 5:00 PM PT.