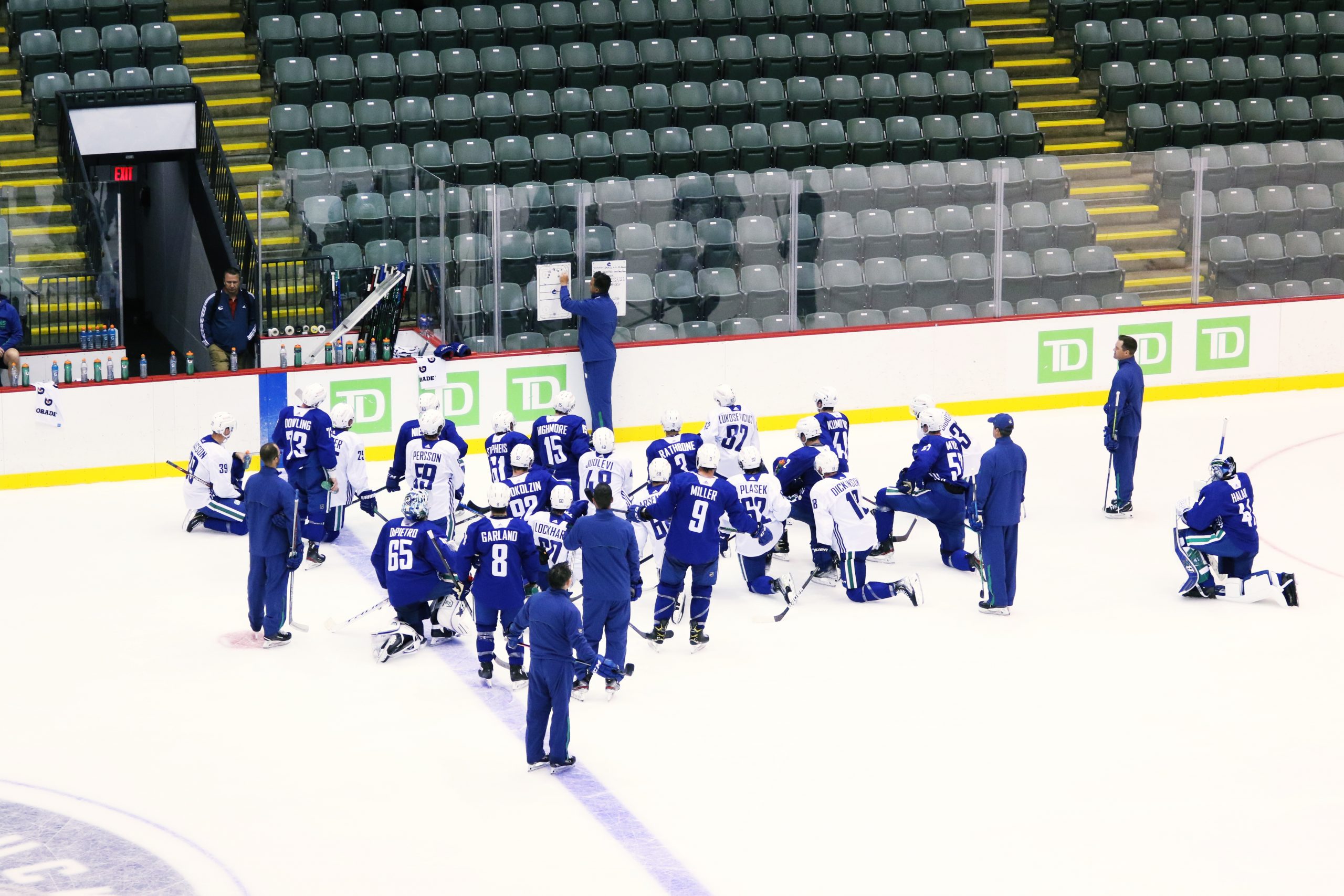 Abbotsford looks to be a challenger in the tough Pacific Division, and camp has certainly added more excitement

VANCOUVER, B.C. — With the Vancouver Canucks training camp wrapping up at Abbotsford Centre, it marked the first time the city got a glimpse at some of the players that would be turning out full-time in the AHL. Abbotsford looks to be a challenger in the tough Pacific Division, and camp has certainly added more excitement surrounding this team.

Check out some of the photos of camp here, courtesy of the awesome Stanley Lee.

Here are some takeaways about how the farm team will shape up in their inaugural season.

It’s proving to be a battle for the remaining spots on the Vancouver forward core. With the top-nine all but set in stone (providing Elias Pettersson re-signs), the players have really stepped up their compete level. Another wrench in the works? Tyler Motte will be missing time after going through undisclosed surgery in the offseason, meaning that his spot will also be up for grabs.

One of the biggest storylines in camp was how impressive William Lockwood looked. Many had him pegged to start in the AHL, but he has been consistently the hardest worker and one of the best players at camp.

He’s not known for the physical side of the game, but Lockwood has really played himself into the conversation for making the big club full time. Here he is laying out a much bigger Luke Schenn at the final scrimmage Friday.

Put Lockwood on the team pic.twitter.com/yaM47v1Pe3

Lockwood’s status as waiver exempt makes this all the more interesting. While his play has definitely earned him a look with Vancouver thus far, it wouldn’t be far-fetched to see him in Abbotsford, at least to start the season. If he does stay in the building, Lockwood is sure to be a fan favorite, one that can put up numbers and outwork any opposition.

Another standout has been Danila Klimovich. The mysterious Belarusian came into camp and improved each and every day, working himself to make the decision even tougher. Though the plan has always been to send him into the QMJHL, Klimovich’s game is very pro-ready.

He’s been looking like a pro-level player today. pic.twitter.com/FeTw5etfOp

Of course, there are rough edges, such as reigning in his violent playstyle, but his shot and his hands have been downright filthy to watch. He would be a man among boys if he headed to Rouyn-Noranda, and part of me thinks that his development would be better served playing in the AHL.

This would beg an interesting question: would Klimovich be better off playing in the top-six in the QMJHL, or fighting his way up the pecking order in Abbotsford into their already stacked forward core? Whichever it is, he will be a very intriguing prospect to keep an eye out for.

Finally, Jonah Gadjovich has made an impressive audition for himself at training camp. Coming in having dropped ten pounds, the 22-year-old has looked faster and stronger than ever before. And still, Gadjovich doesn’t shy away from the front of the net, his bread and butter.

Jonah Gadjovich with the goal after some good physical play from team white.

Gadjovich is pushing for an NHL gig. Scoring in tight is what he does so well. pic.twitter.com/LJ6Qy8WX65

He’s done quite a lot to work himself into the conversation for a full-time call-up, but there’s still the possibility that he remains with the farm team. If that ends up being the case, Gadjovich should be expected to take a big leap in his production, as well as leading the offensive charge of the Abbotsford Canucks.

This isn’t even including Phil Di Giuseppe. Having just been signed this offseason, he’s really impressed with his puck battles and hustle throughout camp. Adding him into the mix makes it a very, very tough call on who makes the big club. As for Abbotsford though, having any one of these players start in the minors just adds more to the offensive firepower.

Michael DiPietro came into camp wanting to battle for a spot in Vancouver, and he certainly has left a good showing from himself. Continuing off a strong rookie camp, the young goalie made sure to make the most of his time in Abbotsford.

A good move by Brock Boeser but a better save from Mikey DiPietro.

DiPietro has had a really good few days of camp. pic.twitter.com/zyCv8eC4VT

He was one of the top performers during training camp and had plenty of time to work with goalie whisperer Ian Clark. Canucks fans should get used to seeing a lot more of this as Mikey enters a critical phase in his development

#65 Mikey DiPietro getting some work in. pic.twitter.com/FJLPgexsNf

It’s all but set in stone that DiPietro will be the starter in Abbotsford. I feel that he could be one of the best goalies in the AHL, given a full season and the closer proximity to the Vancouver coaches. He’ll be extremely fun to watch on the farm team, but I wouldn’t be surprised to see him with Vancouver during parts of the season.

Remember how the last left-handed defense position needed to be filled out? Yeah, it’s not going to be Olli Juolevi’s, some in part to his performances and others due to Jack Rathbone being a stud.

I mean, this isn’t exactly a good look.

R.I.P. to Olli Juolevi, he died doing what he loved. pic.twitter.com/OLtAsT7NvI

While Juolevi has had the toughest time with COVID from what the reports are saying, laying down on the ice after a bag skate certainly isn’t what the coaches want, and Travis Green appears to agree with that.

“I don’t think he did himself any favours.” – Travis Green on Olli Juolevi’s camp and performance in the bag skate on Thursday #Canucks @Sportsnet650

It doesn’t help matters that Rathbone has come in and just smoked his competition. Here he is linking up with Di Giuseppe for a very nice tap-in goal.

The Harvard product has just been sensational to watch, his smooth skating and offensive instincts really leaving an impression. Rathbone has barely set a foot wrong the entire time he’s spent in camp and looks like he belongs with the big boys.

Truly, I could watch Jack Rathbone skate all day. ? pic.twitter.com/vz5N8liFKt

Vancouver is hardpressed to pass him up, and I don’t think that Jack belongs anywhere else but the NHL. That means that unfortunately, Juolevi must pass through waivers and head down to Abbotsford, if this is how it will turn out. He’ll have more time and a bigger role to develop in, but questions now must be asked about if he’ll be with the Canucks organization by season’s end.

With camp wrapping up, the attention now turns to the Canucks’ preseason schedule. They take on the Seattle Kraken in their first game on September 26th, playing in Spokane as the finishing touches are done on Climate Pledge Arena.

The Canucks then return closer to home, as they play against the Calgary Flames in Abbotsford on September 27th. Tickets are still on sale, and it’s a good opportunity to see live pro hockey before the AHL season gets underway.

It’ll be fun to watch some future Abbotsford Canucks in the Vancouver jersey these next few games. There’s still a lot to fight for, and players like Tristen Nielsen and Alex Kannok-Leipert could still leave a good mark before heading down to the minors.

Hockey season is right around the corner, and oh how exciting it is.