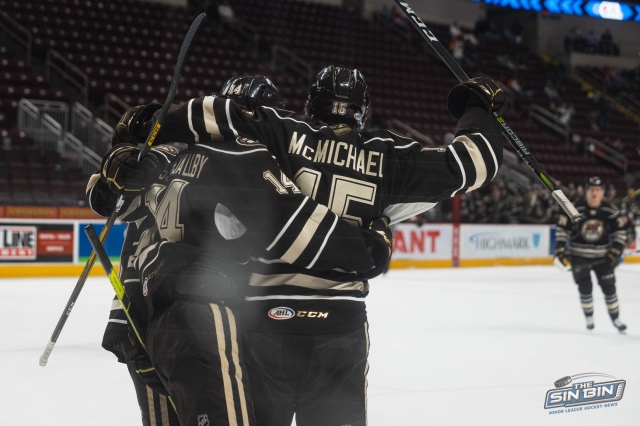 ARLINGTON, Va. – Rookies hit the ice at MedStar Capitals Iceplex as the first formal event leading up to the start of the 2021-22 season features a variety of Washington Capitals talent from the past few seasons. The event is the first rookie event of its kind in a few seasons as the club has been unable to hold its traditional summer development camp, and this year’s events gives rookies a chance to hit the ice a few days ahead of their NHL counterparts. The Capitals do not plan to play any sort of prospect games unlike a number of NHL teams, but it’s a chance for younger players to get exposure with the big club before heading to their respective assignments this season.

The camp roster features a few familiar faces for fans of the Hershey Bears, who are well represented in Connor McMichael, Kody Clark, Riley Sutter, Brett Leason, Aliaksei Protas, Tobias Geisser, Bobby Nardella, Hunter Shepard, and Ryan Bednard, who have all skated with the Bears or are on contract to join the club this season. It’s also a chance for recently drafted players like Vincent Iorio, Haakon Hanelt, and Dru Krebs to pull on the Capitals uniform for the first time since being drafted this past summer, and players like 2020 first-round choice Hendrix Lapierre to get experience before his final season in juniors. He will be likely to join the Bears for the 2022-23 season.

McMichael spoke to the media after the first day of camp, highlighting his off-season workout at a camp hosted by Gary Roberts with players like Connor McDavid and Steven Stamkos. “I had a really good off-season,” McMichael said. “I feel like I worked on my lower body strength, able to protect the puck a lot more and able to make the next jump. I think that’s one of the biggest things I need to work on is protecting the puck against bigger, stronger guys.”

This season’s rookie camp is only the second that he’s been able to participate in since being drafted in the first round of the 2019 NHL Entry Draft, but earned important experience with the Capitals but mostly with the Bears this past season, and he will be looking to make a big impression with the Chocolate and White this fall.

“Those guys are great players and being on the same ice as them is pretty cool, just watching them day in and day out and watch how they grow their game, just pick up on little things from each of them. They gave me tips here and there, mostly learning from their example watching them,” McMichael said.

Connor McMichael discusses his offseason workout regimen and his continued focus on building strength after the first day of Rookie Camp at MedStar Capitals Iceplex.#ALLCAPS pic.twitter.com/GKWKaK4cRs

Lapierre has his sights set on entering the conversation for an NHL gig in the future but spoke about working with what he could control, especially during his injuries.

“I had a really good summer in terms of training and nutrition and I’m feeling the benefits of it in terms of speed and mobility. Right now, I feel good on the ice and I can move better whether it’s speed or acceleration. I watched a lot of videos of my games last year and try to find patterns to improve upon,” the 19-year-old forward said.

"I really want to prove that I'm not only a junior player right now, that I can play at the next level."

Iorio and Lapierre were two highlights of a video posted by the Capitals in which the former wore a microphone during the first day of training camp. The two share a few good moments during the video where Lapierre leans in to say hello to fans, as well as a wholesome set of compliments between the two. The entire lineup is on display for the video which gives a good look at some of the drills the prospects worked on during the first day.

Although the rookie camp has only just begun, it will end early this week as the focus shifts to the main camp for the Caps this week. Preseason action follows shortly behind as NHL teams will soon be making roster decisions as camp goes on, and many of the players on ice today will get a crack at some of that action before being assigned to the Bears or their respective junior teams.