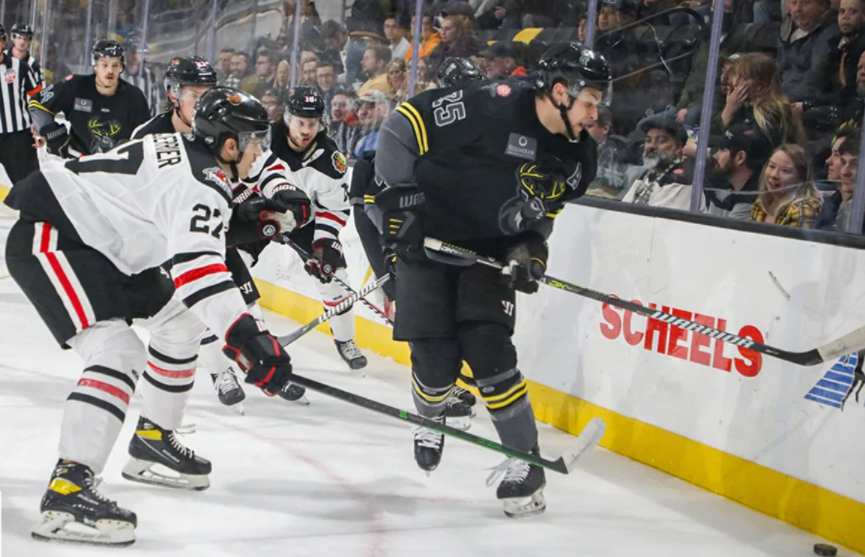 CORALVILLE, Iowa – After spending the last three weeks with the Iowa Wild, Kris Bennett returned to the Iowa Heartlanders on Friday and made it a triumphant one, scoring two goals as the Heartlanders defeated the Indy Fuel, 5-3. The victory snapped a seven-game losing streak (0-6-1) and moved Iowa into a tie with Indy.

Iowa took the lead 13:18 into the first period. Jack Billings made a great pass across the slot to Kaid Oliver at the backdoor, who looked to redirect the puck past Cale Morris, but the Fuel goaltender made a great save. The puck went behind the net to Ben Sokay, who put it out in front to Jonathan Desbiens. Desbiens fired a shot by Morris for his second goal of the season, giving Iowa a 1-0 lead heading into the break.

Just after the four-minute mark of the second, Indy tied the score. With the Fuel on a power-play, Keoni Texeira intercepted a clearing pass, firing a shot that beat Heartlanders goaltender Trevin Kozlowski.

The score remained tied until 11:06, when Bennett, named the Captain on Thursday, gave his team back the lead. This time it was Iowa who used the man-advantage to retake the lead. The Heartlanders were doing a great job moving the puck inside the Indy zone. The puck came to Jake Linhart just below the left faceoff circle, who made a great one-touch pass to Bennett. Bennett redirected the puck past Morris for his fourth goal of the year.

The Heartlanders extended their lead to two just 28 seconds later. Oliver had the puck, passing it back to the point to Cole Stallard, who fired a shot that Morris saved, but the rebound came right to Oliver, who put it in for his first professional goal.

The Fuel were down, but they regrouped, scoring a pair of goals three minutes apart to tie the score again. The first came at 13:50 when Brent Gates fired a shot Kozlowski saved, but the rebound was loose in front of the net. Mike Lee scooped it up and moved around a sprawling Kozlowski before putting the puck in for his first goal of the season.

At 16:50, Riley McKay tied the score. Texeira fired a shot that McKay redirected for his second goal of the year.

The teams looked like they would head to the second intermission tied at three, but Bennett scored the first shorthanded goal in franchise history with one minute left in the period. Bryce Misley carried the puck into the Indy zone on a 2-on-1 break. Misley waited until the last second before passing the puck across to Bennett, who put a backhander in for his second goal of the game.

With 90 seconds left in the game, the Heartlanders closed out the victory when Stallard scored an empty-net goal. That gave Iowa a 5-3 victory, their first win since opening night.

Bennett finished with two goals and now leads the Heartlanders with five tallies. Stallard and Oliver each had a goal and an assist, and Sokay had two assists. Kozlowski earned his first professional victory, stopping 26 of 29 shots.

The Heartlanders are off on Saturday but return to the ice on Sunday when they welcome the Kalamazoo Wings (3-3-0). The puck drops at 3:00.