CLEVELAND – It has been almost a full year since fans were last able to bear witness to their favorite AHL teams taking the ice. 331 days, in fact. But who’s counting? While players, staff, and fans continue to count down the remaining days, they will also embrace many changes: opponents, schedules, and rosters.

Before we get into the schedule, most fans are wondering if they will even be able to watch hockey in person. The answer is: maybe?

Perhaps the most exciting news right now is that a limited number of fans will be allowed at each Monsters home game at Rocket Mortgage FieldHouse. Through a variance approved by the State of Ohio, up to 10% of the FieldHouse’s total seating capacity will be allowed in attendance.

Priority for the approximately 2,000 seats will be given to Monsters Hockey Club Members, with additional potential ticket opportunities to be announced at a later date.

At the time of publication, there is no word on group sizes, arena regulations on social distancing, or other new protocols that may be put into place.

The Monsters’ 14th season in the AHL will be marked by a reduced 28-game schedule and a temporary division realignment to the Central Division. The foes awaiting them aren’t complete strangers, as the Monsters used to compete in the Central until the 2017-18 season.

On Friday, February 5th at 7:00 p.m., they drop the puck on the season in Rockford against the IceHogs. Their home opener is scheduled for a week later on the 12th, also at 7:00 p.m., where they will host the Rochester Americans.

While most teams will be facing only in-division rivals, Cleveland actually will not play the Iowa Wild. Instead, they will face off against their closest geographic rival, the North Division’s Rochester Americans. 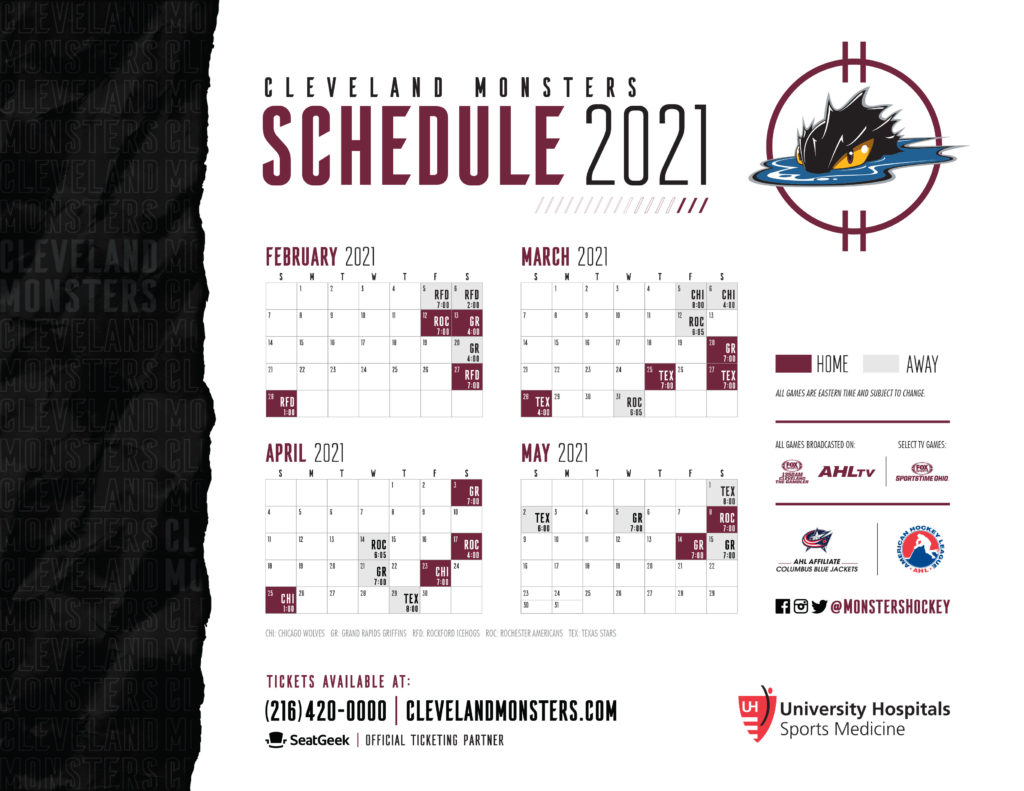 To help with travel time and costs, it may come as no surprise that the longest home and away stands have one common denominator: the Texas Stars. Meanwhile, games with the other, more geographically-friendly teams are sprinkled a little more throughout the season.

A Roster In Flux

The changes don’t end there. There will be a host of new faces on this season’s roster for fans, staff, and players alike. Some of these new faces are rookies to the league, while others have found themselves a new AHL team. One storyline to watch will be the impact of players being loaned from NHL clubs that find themselves without an AHL affiliate this season.

The Monsters’ training camp roster is listed below, alphabetically by position:

There is absolutely room on the squad, mainly for extra defensemen. It is not clear if reinforcements may come in the form of additional loans, a last-minute signing, or some other source.

Training camp is currently underway at OBM Arena in Strongsville, OH. All on-ice sessions and practices this season will be closed to both media and the public to observe COVID-19 protocols.

Changes Can Be Good

Despite all of the changes, they all mean one thing: Hockey is coming back! The AHL has really strived to put together some semblance of a season, mainly to keep player development going. While things will look, feel, and sound different, the league’s primary purpose, talent development, will remain at the forefront.

Is it February yet?

Deana Weinheimer is the AHL Editor for The Sin Bin. Follow and interact with on Twitter for all the latest news & notes regarding the AHL’s Cleveland Monsters! Don’t forget to follow The Sin Bin on Facebook and Twitter for AHL, ECHL, and SPHL minor league hockey news & analysis!