TUSCON, Ariz. — The Iowa Wild (5-1-1) finally suffered their first regulation loss of the year, falling to the Tucson Roadrunners in Arizona.

TUSCON, Ariz. – The Iowa Wild (5-1-1) finally suffered their first regulation loss of the year, falling to the Tucson Roadrunners in Arizona. Michael Chaput led the way for Tucson, scoring two goals in the first period while Adin Hill made 26 saves for the Roadrunners.
The Wild have yet to score first in a game this season, and that trend continued on Friday night. A little over two minutes into contest, Tucson was on the power play. Brayden Burke sent a sharp pass across the crease to Nick Merkley. Merkley blasted the one-timer that Chaput deflected in for his fourth goal of the year.
Nine minutes later, the Roadrunners extended their lead. The Wild were careless in their end, turning the puck over to Michael Bunting. He passed to Lane Pederson, who made a quick pass to the slot. An Iowa defender was able to deflect the puck away, but it went right to Chaput, who made a nice move before tucking the puck just inside the post for his second goal of the game. 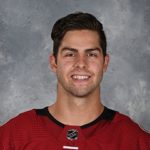 This contest looked like it could turn ugly, but Kyle Rau cut the Iowa deficit in half with just 22 seconds left in the first. Brennan Mennell fired a blast from the point the Rau tipped in for his third goal of the year.
Hill gave up the late goal to close out the first, but he was brilliant the rest of the night. The Tucson netminder made 12 saves in the opening frame and added seven more in the second. That included a few golden opportunities for the Wild, who were left empty-handed thanks to Hill.
In the third, the Tucson Roadrunners restored their two-goal lead. Jalen Smereck fired a blast from the point that Mat Robson saved, but the rebound popped up. Lane Pederson swatted the puck out of the air and into the net for his team-leading seventh goal of the season. The tally gave Pederson a two-point night. 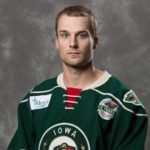 With a little under four minutes left in the contest, Cody McLeod took a double minor, leaving the Wild short-handed for the seventh time in the match. They pulled Robson with a little over a minute left in the game, looking for the equalizer, but could not get a shot on net as the Tucson Roadrunners closed out the 3-1 victory.
The win was the fourth straight for Tucson (5-1-0), leaving them a point behind the Ontario Reign for the top spot in the Pacific Division. The Wild remain a point ahead of the San Antonio Rage in the Central.
The loss marked the first time that the Wild have been outshot this season. The team also lost their first road game of 2019-20. Iowa had just two power play opportunities while Tucson had eight chances with the man advantage.
These two teams will be back at it on Saturday evening. The puck drops at 9:05 CT.