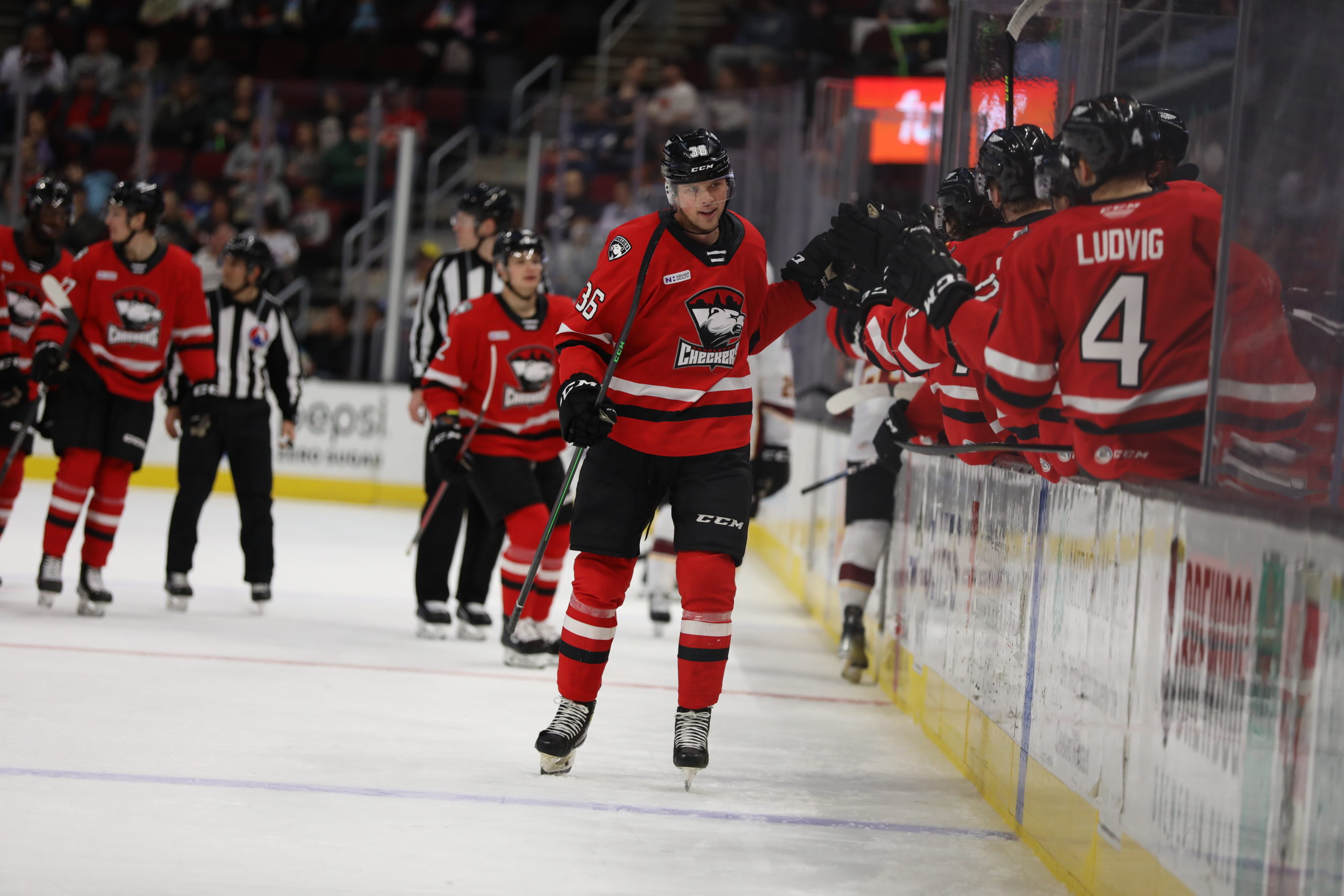 #AHL | The Charlotte Checkers ran their winning streak to four in a row Saturday, making an early lead stand up in a 3-2 win against Cleveland. Our Zach Martin talks about how it happened

CHARLOTTE, N.C. – Riding a three-game winning streak going into Saturday’s game against Cleveland, the Charlotte Checkers made a trio of early goals stand up to prevail 3-2 to end 2022 with a four-game winning streak as the Monsters lost their fifth in a row.

That's how you start a hockey game, folks pic.twitter.com/WbL5nr7hPn

It seemed right off the bat that this game would be interesting as there were two penalties, both against the Monsters, in the first couple of minutes of the game. The Checkers would strike first at the 6:42 mark of the period. Initially, there was a shot from the top of the right faceoff circle from Santtu Kinnunen that seemed to bounce off of a couple of Monsters players. The puck managed to take a couple of more bounces and went off of the Checkers’ forward Patrick Giles and snuck past Monsters goaltender Jet Greaves. Giles’ goal would be his third of the season, and it gave the Checkers a 1-0 lead in the early portions of the first period. Kinnunen would be credited with the primary assist, his 12th on the season. Also, Anthony Bitetto would get his fourth assist as well.

Just how they drew it up! pic.twitter.com/yHcdKYph1J

Charlotte would not wait long to double its lead as Cam Morrison would score at the halfway point of the first period. Morrison positioned himself in the slot in between the faceoff circles right in front of the Monsters’ goal. By having perfect placement, he was able to receive a perfectly placed pass from Gerry Mayhew, who was circling around the Monsters’ net. The pass was sent right into Morrison’s wheelhouse, and Morrison was able to slot it home past Greaves to make it a 2-0 Checkers’ lead. The goal was Morrison’s first goal as a Checkers player after having five goals earlier in the season with ECHL side Florida Everblades. Mayhew was credited with the primary assist, which was his sixth of the season for the Checkers.

His first as a Checker makes it 2-0! pic.twitter.com/tntC9BEltO

The last goal of the period and of the game for the Checkers would come seven and a half minutes later at the 17:37 mark of the first period. After scoring two on Thursday night, it seemed like Grigori Denisenko wanted to keep his hot form going in this game as well. Denisenko found himself mostly alone off the left side of the Monsters’ goal, with only Greaves to worry about. He was able to extend the stick out to get enough power behind it to slide it on a semi-wrap-around shot passed Greaves’ stretched-out frame. Furthermore, the poise by Denisenko to stay with the play while having a couple of Monsters’ players crashing in on him shows his patience on this goal.

Some fireworks at the end, but we're still up by three! pic.twitter.com/cc1ZqVNsmP

While there were no goals in the period, there would be fireworks late in the period to change the complexion of the game. The first period saw seven penalties, three to the Checkers and four to the Monsters. The second period saw ten penalties, three from the Monsters’ Brett Gallant. Gallant, who’s been with the Monsters since the 2015-16 season when they were the Lake Erie Monsters, is known for taking a plethora of penalty minutes every season. Towards the end of the second period, he managed to get 14 penalty minutes alone at the 19:35 mark. For some perspective, the Monsters finished with 41 penalty minutes in the game, Gallant had 14 of them by himself.

What led to Gallant getting 14 minutes started around the 10:31 mark of the period as the Monster’s Cole Clayton was given a 10-minutes misconduct penalty. When it got to the 19:35 mark of the second period, it seemed like tempers boiled over after Checkers’ goaltender Mack Guzda made a save on a Monsters player.

Busy day at the scorer's table in Cleveland.
Chaos reigned late in the 2nd, with Brett Gallant and John Ludvig coming together. Gallant took offense to a player in a full mask getting into the melee and tossed Ludvig's helmet in the crowd.#CLTvsCLE @FPHMonsters @FPHCheckers pic.twitter.com/ioc3dOmi16

While there were other scrums, it was clear that the tie-up between Ludvig and Gallant was the main attention for the referees. At one point Ludvig lost his full-cage helmet, which he’s worn since coming back from injury last week. Skating away from the fracas was Gallant holding Ludvig’s helmet while the referee was trying to get it from him. In the end, Gallant threw Ludvig’s helmet into the stand before being sent off the ice. After the dust-up, Gallant was served two roughing penalties, one for actual roughing and one for taking an opponent’s helmet off, along with a 10-minute misconduct for throwing the helmet into the stands. Other than the brouhaha at the end of the second period, the game was still 3-0 for the Checkers going into the second intermission.

After the insane ending to the second period, the Monsters were able to claw back to within one to make the game just as tense as Thursday’s game. Just like on Thursday, the Monsters’ Trey Fix-Wolansky would add his name to the scoresheet at the 7:26 mark of the third period. Just like Denisenko, Fix-Worlansky wanted to end 2022 on a hot streak scoring two goals in the final two games for the Monsters. The goal was Fix-Wolansky’s team-leading 14th of the season and also a powerplay goal as well. The Monsters would be 1-for-7 on the powerplay for the game, the Checkers finished 0-for-6 on the flipside.

At the 16:08 mark of the period, Cole Fonstad would get the Monsters their second goal of the game and get it back within one of the Checkers. The goal was his eighth of the season and gave the Checkers a sense of making sure to keep the lead intact. Although, Guzda and the Checkers’ defense stood tall as they did for Lyon on Thursday night to close out 2022 with a 3-2 win. Guzda finished the game by stooping 28 of 30 Monsters’ shots. The Checkers would end 2022 with a four-game winning streak and slaying the Monsters in Cleveland to end the calendar year.

The Charlotte Checkers ended 2022 with a four-game winning streak sweeping the Providence Bruins and the Cleveland Monsters. The team goes into 2023 with a record of 16-11-2-1 and 35 points. Currently, they are third in the Atlantic Division one point ahead of the Bridgeport Islanders. The Checkers have 42 games left to play in the 2023 portion of the season, finishing 2022 with 30 games played. Furthermore, the Checkers’ four-straight wins come with the team being 5-5-0-0 in their last 10 games.

The Checkers play the Wilkes-Barre/Scranton Penguins on Wednesday and Friday to start off the 2023 portion of the season. They will travel the next day on Saturday to finish the week off with a one-game slate against the Hershey Bears. Those three games next week will be huge for the Checkers to see if they keep their winning streak alive and cement themselves in the top 4 of the Atlantic Division.

The Panthers have assigned Anton Levtchi to Charlotte

In transaction news, the Florida Panthers sent Anton Levtichi back down to Charlotte on Saturday. He made his NHL debut on Thursday night in Sunrise, Fla. Getting Levtchi back before the Pennsylvania trip could be huge for the Checkers next week. The Checkers getting Denisenko back one week and then Levthci the next could really jump-start a great run for the team going into January.