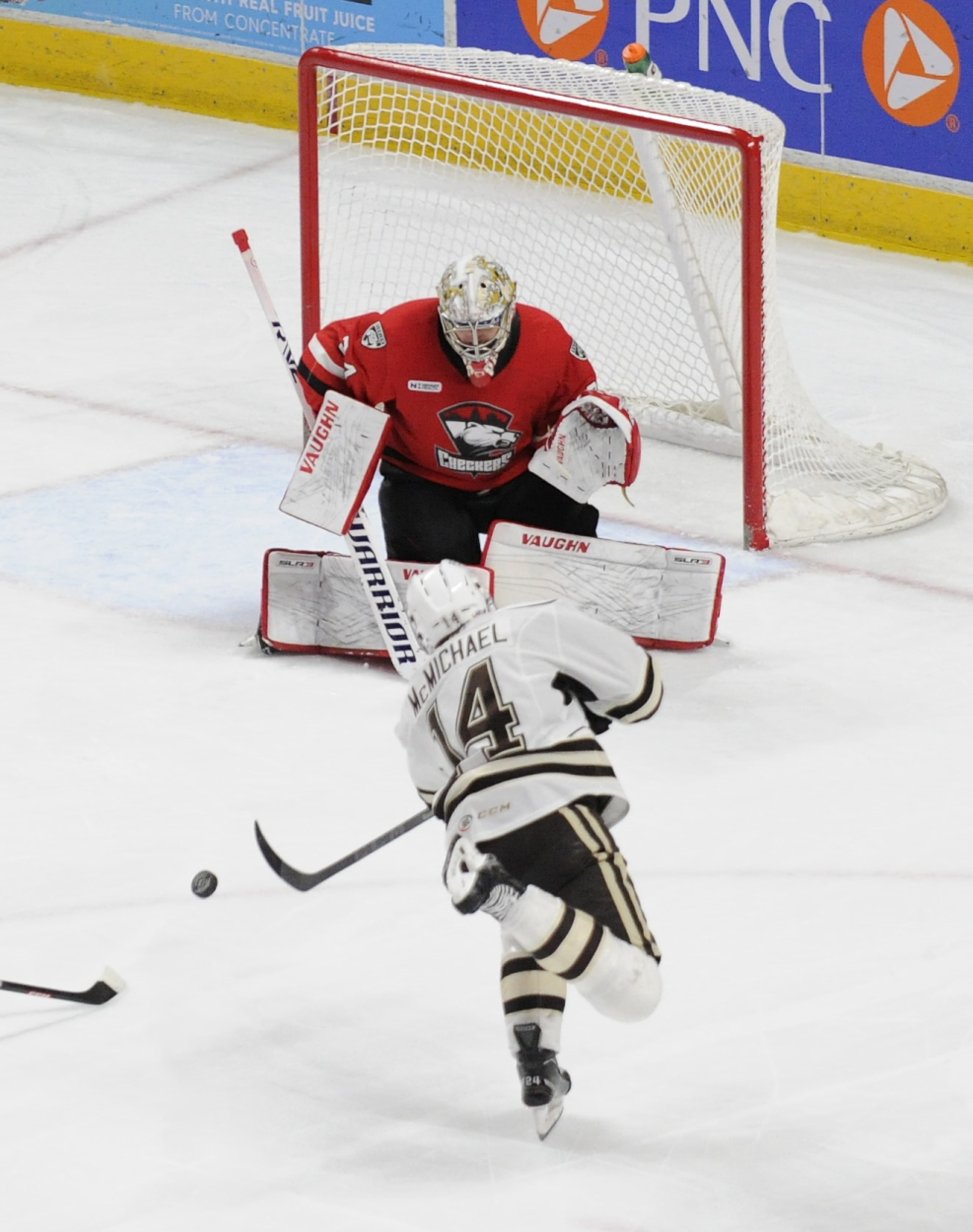 #AHL | @TheHersheyBears and @CheckersHockey met up for an entertaining 60 minutes of hockey on Saturday. @FPHBears has the breakdown:

HERSHEY, Pa. – It was a tight-checking, well-contested game between the Hershey Bears and the Charlotte Checkers on Saturday night at Giant Center, where the game was tied at one for a considerable portion of play. A late third-period power-play goal by Cameron Morrison on a deflection ultimately proved the difference as the Checkers escaped Hershey with a 3-1 win. Zach Fucale took the loss in goal with 19 saves, while Alex Lyon got the win with 24 stops.

All told, it was as close and entertaining a game as one could find across the American Hockey League, as the teams traded quality chances and opportunities. Bears forward Connor McMichael had three high-quality chances that Lyon turned aside as a difference-maker in this game after the teams traded goals in the first period. Aleksi Heponiemi scored his seventh goal of the season on a blocked pass in the Hershey zone that landed right on his stick for the opening goal. The Bears countered before the period was over when Hendrix Lapierre won a race to the puck in the Charlotte zone and beat Lyon through his pads for his ninth goal of the season.

Then, the two teams settled into a defensive game that seemed destined to go beyond sixty minutes. On a power play in the last few minutes of the game, the Checkers moved ahead when Morrison scored the eventual game-winner on a deflection in front of Fucale. It’s only Morrison’s second goal of the season, but it was the lone power-play marker in nine opportunities between the two teams. The Bears lost despite receiving a plethora of players off the injured list as well as from their National Hockey League affiliate, the Washington Capitals. Head coach Todd Nelson attributed some of the team’s struggles to finding the right line combinations but was still satisfied with his team’s effort.

Hendrix Lapierre scored, but Alex Lyon turned out 24 Hershey shots to give Charlotte the 3-1 win tonight at #GIANTCenter. pic.twitter.com/eLoXaPOoQd

“You know what, we didn’t finish our chances,” Nelson said after the game. “We had in the second period alone four or five breakaways, we had some chances to open the game up. We had some chances on the power play that we didn’t finish. It was a game tonight where, not making excuses, but we’ve been off for quite a while and we weren’t really in game mode. Our lineup changed quite a bit with the infusion of five players, so the chemistry wasn’t quite there. We had the chance to win the game, I thought their goalie played well, and the difference in the game was the power play goal.”

“It’s finding that right chemistry with our lines. I didn’t mind them, but I think Charlotte did a pretty good job of taking care of our [offensive] zone time, they checked us very well and played a good game. We addressed it after the game, it wasn’t a horrible game, but we’ve lost two in a row, we’re not gonna lose three. We have a homestand here, we’ve got to take advantage of it. We’re starting five games in eight nights, we’ve got to get in a rhythm and just go from there. It’s not a panic situation whatsoever but the guys have to understand it could go south quick.”

As Nelson mentioned in his press conference, the Bears continue to struggle on the power play, coming up empty in four opportunities and ranking sixth in the division with a man up. With top personnel like Garrett Pilon and Bobby Nardella back in the lineup, their numbers should start to improve, but it wasn’t meant to be on this night. The Bears will have to try and turn things around with four games remaining in their seven-game homestand.

The Bears did fall out of first place courtesy of a win for the Providence Bruins on Saturday, proving that the Atlantic Division is as tightly contested as ever. The Bears will be right back at it on Sunday as they host the Syracuse Crunch, while the Checkers will be idle after playing three games over the last five days. The waiver wire will be of interest to the Bears on Sunday as the Capitals placed Joe Snively on waivers to assign him to Hershey nearly a year after his last game with the Bears.