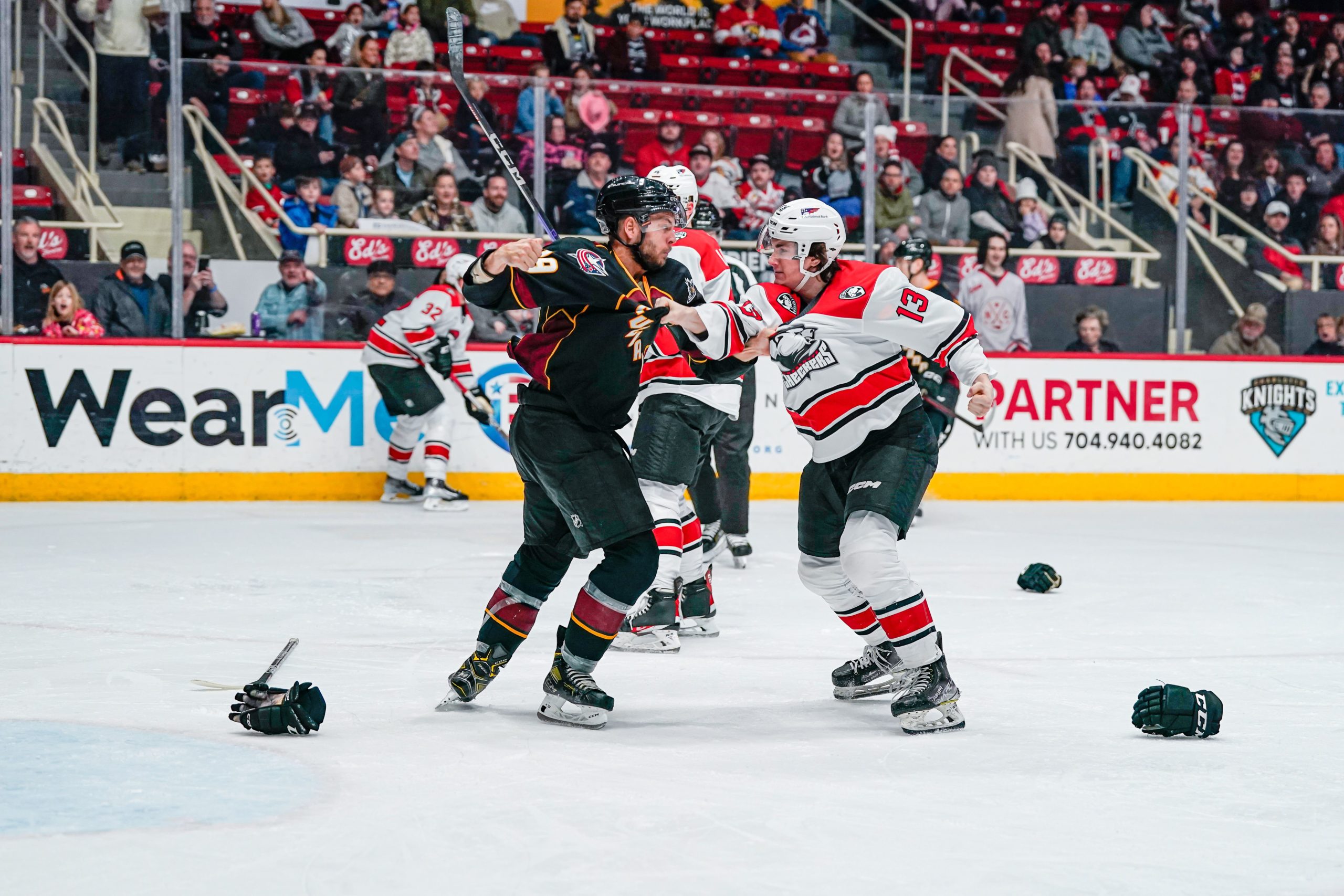 #AHL | After a 9-0 rout of @monstershockey Saturday, @checkershockey looked to repeat their success on Sunday. This time, luck wasn’t on their side. @FPHCheckers was there for the “chaotic mess” and spoke with Riley Nash and Geordie Kinnear.

CHARLOTTE, N.C. – On a rainy Sunday afternoon, the Charlotte Checkers hosted the Cleveland Monsters to finish out a two-game weekend set at Bojangles Coliseum. The Checkers won on Saturday, on North Carolina Night, 9-0 in a rout. They looked to repeat their success against the Monsters on Country Music Day. Although on Sunday, luck wouldn’t be on their side as they lost to the Monsters 5-2 in what would be described as a chaotic mess. This game alone had 96 combined penalty minutes.

Right from the opening puck drop, it seemed that the Checkers started right where they finished off Saturday night. Charlotte got on the board quickly, taking only a minute and three seconds for Riley Nash to get Charlotte an early 1-0 lead. The initial shot came from defenseman Lucas Carlsson, which was initially saved by Monsters goaltender Daniil Tarasov. Although Nash was in the right place at the right time. He stopped up the loose puck in front of the net and backhanded the puck blocker side on Tarasov.

Nash picks up the rebound and backhands it home to give the #Checkers an early lead #CLEvsCLT pic.twitter.com/zhgQBO2Jft

The main story of the first was the tons of penalties- more so the game as a whole, as previously stated. There were a combined two fights in the period, but the one that mainly stood out was the first one between Monsters’ Robbie Payne and Checkers’ Riley Bezeau. What makes this one interesting is that Payne just got done serving a roughing penalty just a couple of minutes or so before the fight. Bezeau won the brouhaha, but it’s still an interesting case for Payne to take back-to-back penalties within three minutes of each other. 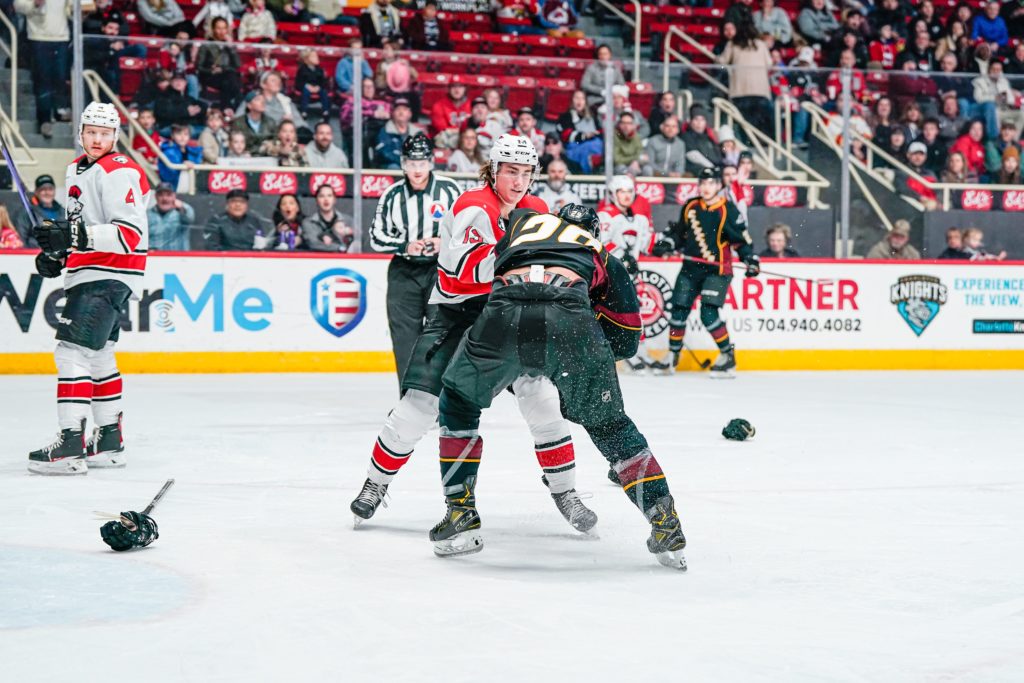 The game got very chippy later in the period when Monsters’ defenseman Brendan Miller caught Aleksi Heponiemi on what looked like a knee-on-knee hit in the Cleveland zone. Miller complained about getting called for the penalty before Checkers’ assistant captain Riley Nash stepped up for his teammate. Overall, there were a combined 30 penalty minutes (out of 96) in the first period. Once the dust somewhat settled, the Checkers went into the intermission leading the game 1-0. Charlotte ended the period leading in shots-on-goal 15 to 4 as well.

In both of the weekend games, the ultimate result was decided in the second period.

Saturday’s game was in favor of the Checkers, while Sunday’s game was more in favor of the Monsters this go around. The chippiness from the first period continued over into the second period, as there was some early 4v4 play. Monsters’ Billy Sweezey and Checkers’ Logan Hutsko both got matching roughing penalties which wouldn’t be their only penalties of the game.

Despite the early feistiness, the Checkers did manage to double their lead at the 6:33 mark of the period. The Checkers had a three-on-two odd-man rush going into the Monsters’ zone with a couple of Cleveland Monsters in tow.

The play started off with Connor Bunnaman streaking down the left side near the boards, going toward the red line by the Monsters’ goal. It was unclear who he was passing to because he had Gerry Mayhew going to the front of the net with Santtu Kinnunen on the far side of the ice near the right side boards. Bunnaman threw the puck to the front of the net, and luckily, it caught a little bit of Mayhew’s stick before flying past Monsters netminder Daniil Tarasov to make it a 2-0 game for the Checkers.

They say, “when you put the puck on the net, good things happen.” Good things did indeed happen for the Checkers on this goal. It would be their 11th and final goal unanswered in four and half periods over the weekend.

Throw the puck on net and good things happen. Mayhew uses the body to give the #Checkers a 2-0 lead. #CLEvsCLT pic.twitter.com/NwOcjUklAV

The goal was Mayhew’s eighth of the season, along with Bunnaman’s third assist of the year. Anthony Bitetto was eventually credited with the secondary assist, giving him his seventh of the season. Unfortunately for the Checkers, the game slipped away from them as both teams continued taking penalties, which meant limited 5-on-5 play.

Before the plethora of penalties continued, the Monsters finally broke their 0-for-11 goal drought at the 8:52 mark of the period. Monsters forward’ Tyler Angle grabbed a puck in the Checkers zone and snapped a goal past Checkers netminder Spencer Knight to cut the lead in half. The goal was Angle’s fifth of the year.

Cleveland eventually went on to tie the game, but not before the teams would put up the first of a couple of 10-minute misconduct penalties. After a whistle in the Checkers’ zone, Monsters’ Justin Richards and Checkers’ Johnny Ludvig exchanged words and grabbed hold of each other. Both misconducts were for continuing the altercation. Furthermore, both players were sent to their respective locker rooms for the rest of the period because it was under 10 minutes left in the second.

not sure these teams like each other tbh pic.twitter.com/wIKpF012cL

The equalizer came from Josh Dunne getting a shorthanded goal on a Checkers power play. Does that name sound familiar? Probably because Dunne was one of the players mentioned in our preview for this weekend’s set. He entered the Checkers zone and snapped the shot blocker side on Knight to tie the game up at two, giving new life to the Monsters. Dunne’s goal was his ninth of the season.

As if that wasn’t chaotic enough, the scoreboard decided to get in the action. The scoreboard, both in Bojangles Coliseum and on AHLtv, said there was 91:30 left in the period. That is not a typo, at least on my part. It did read 91:30 left, and the Checkers scoreboard people had fun with it, adding a Spongebob time card of “Three Hours Later” on the screen. Hockey can be really fun in times of chaos.

After that was fixed, the period eventually came to a close. The second felt like it took three hours, so the Spongebob time card wasn’t too far off in that estimate. The period ended with the Checkers leading in shots-on-goal 25 to 17 in a tied game at 2-2.

For the most part, the first half of the third period seemed like both teams had chances to take the lead. Either side had Grade-A chances to give their team the edge in the last frame. Although, it was the Monsters who broke the tie with their third unanswered goal of the game. The third Monsters goal was credited to Cole Fonstad at the 9:25 mark of the period. He entered the Checkers’ zone and snapped the puck blocker side on Knight to make it a 3-2 lead for Cleveland. Fonstad was credited with his 10th goal of the season, along with Owen Sillinger getting his 11th assist on the year.

As mentioned earlier, Sweezey popped back up with more penalties later in the game. At the 9:54 mark of the third period, Sweezey and Bezeau got into an altercation where both guys got into a jawing match in the corner and eventually dropped the gloves. It ended with both guys standing after exchanging some punches that both landed. Although, Bezeau received a 10-minute game misconduct after the fight because it was his second of the game.

Remember my scorebook from yesterday with nine Checkers goals? Well the penalty side of that scorebook is getting a workout today! pic.twitter.com/yyw1XEnsAX

Give TJ Chillot a ton of credit for trying to keep up with all of the penalties in this game. Someone give that man a heating pad for a potential hand cramp.

After the third brouhaha of the game, the Monsters extended their lead at the 10:57 mark of the third period. Trey Fix-Wolansky, who was also mentioned in the weekend preview, was the Monster’s hero as he snapped a puck past Knight to make it a 4-2 Cleveland lead. That goal was Fix-Wolansky’s 18th goal of the season, along with Angle’s 11th assist of the year. Also, Jake Christiansen was given his 10th assist of the year as well.

The Monsters eventually iced the game with an empty-net goal at the 18:12 mark of the third. Angle ended up getting his second goal of the game and his third point total. After scoring the empty netter, Angle held his hand up to his ear as if to say, “Can you hear me now?”

At first, it seemed off, given that the celebration came on a 5-2 empty-net goal. But it seemed that this wasn’t directed to the crowd but more in response to a challenge given by his coaching staff.

“We’re gonna see today. It’s a turning point right? Second half of the season, and you know I’ll have hope if we can respond in a way that is necessary. If some guys don’t, then it tells a lot about them as an individual and about our group. To be honest, if we don’t respond the right way, there won’t be a lot of hope.”

In that context, it was Angle’s way of showing that guys wanted to respond after getting routed 9-0 the day before. The Monsters came to be physical in Sunday’s game and got the Checkers to play their game. Hence why there were twelve power-play chances combined for both teams. Both teams, although, went 0-for-6 on each of their respective powerplays.

#CLEvsCLT | #Checkers kill off the interference penalty. The PK unit is now 6-for-6 on the night compared to the PPs 0-for-6.

In the end, the Monsters won the game 5-2 to split the weekend set against the Checkers and to finish the season series 1-3 against Charlotte. The Checkers finished 3-1 on the year against the North Division’s Monsters. The third period added the last 26 minutes of the 96 penalty minutes of the night.

FPH – “Thoughts on the penalty kill going 6-for-6 tonight, I know you said you don’t like seeing much of the guys in the box, what are your thoughts overall on the team standing tall on the disadvantage?”

FPH – “Two different results this weekend, but you guys are still in the thick of a battle for third place in the division, what does it say about this team that’s still fighting hard with all the constant roster changes?”

Nash – “That’s the American Hockey League. That team [Cleveland] is missing five guys in Columbus. Every team around the league is missing guys, that’s the way that it is. You got and try to be as consistant as possible. I feel like we’ve done a pretty good job of that lately the last month or so. It’s going to be a battle right to the end, we just got to keep our head down, and keep working. Hopefully solve things like what happened tonight and have a better showing next game.”

The Charlotte Checkers, after 39 games played, sit on the season 20-15-2-2 with 44 points on the year. They’re still currently third in the Atlantic Division, one point ahead of the Wilkes-Barre/Scranton Penguins and the Lehigh Valley Phantoms. Charlotte is still in the tight fight for the top three of the division, with teams in third to eighth place only separated by three points.

Every game from here on out matters, especially if the checkers want to get into the Calder Cup Playoffs. The Atlantic Division will come down to the wire in probably the most staked division in the American Hockey League.