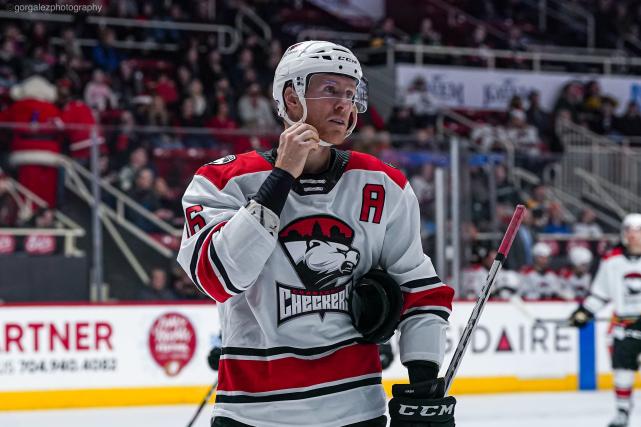 CHARLOTTE, N.C. – The Charlotte Checkers hosted the Providence Bruins for the first time this season at Bojangles Coliseum. The first three times these teams faced each other was in Providence. Ultimately, the Bruins would end up winning all three of those games. This time, the Checkers wanted to see if the home-ice luck would go their way. For the Checkers, having the Florida Panthers send Aleksi Heponiemi back down could be much-needed help for the team. Fortunately for the Checkers, the home-ice luck paid off in the end as they won in overtime 2-1 over the Bruins.

The first period was physical, to say the least. Checkers newcomer Givani Smith was throwing around the body to set the tempo of the game. Within the first five minutes of the period, there were two fights. The first was between the Bruins’ Alex-Olivier Voyer and the Checkers’ Riley Bezeau. That fight ended in a tie with both guys holding onto each other. Although in the second fight, it was clear who the winner was. It wasn’t even a full minute later before there was the second fight of the game in the first five minutes. The Checker’s Anthony Bitetto and the Bruins’ Joey Abate got into it. In the end, Bitetto got Abate down on the ice, which promoted the referees to get in there to end it.

For those keeping count at home we're five (5) minutes into the game and there's been two (2) fights 👊 pic.twitter.com/oYaoRzWkat

It was clear right away that the Checkers were looking to be a physical team that looked to shake off the five-game losing streak. For most of the first period, it seemed like the Checkers were on the front foot keeping pressure on the Bruins in all three zones. Unfortunately for them, the Bruins would strike first in the game. At the 13:43 mark of the first period, Joona Koppanen would make it a 1-0 game for the Bruins. The goal was Koppanen’s third goal of the season. The lone assist of the goal would go to Justin Brazeau, his sixth of the year.

The first period ended with a 1-0 lead for the Bruins, although the Checkers seemed to have most of the momentum. Charlotte led in shots-on-goal 8-5 in the period.

Nothing on the board in period two pic.twitter.com/d79cxwB0dg

After an eventful first period, it was quieter in the second. No goals were scored and it was seemingly a very fast period. The main thing that happened during the period was a massive hit by Charlotte’s Johnny Ludvig. He just came back from injury and wanted everyone to know that he was back with a force. He laid a booming hit on the Bruins’ Marc McLaughlin on the Checkers’ four-minute penalty kill.

Johnny Ludvig is back and he wants to make sure everyone knows it 🔨🔨🔨 pic.twitter.com/nsi22cn64n

Another big moment of the second period was the penalty kill unit killing off a four-minute minor in the period after a Dominic Franco double-minor for high-sticking. The Checkers’ penalty kill unit has been on a run lately and that stayed true through two periods of the game, killing off three-of-three penalties at the time. The last main thing that happened during the period was also the most uncommon to see in a game. Around a minute left in the period, the play was called dead after the puck hit the scoreboard over center ice. There is something you don’t see every day during hockey games. All in all, a quick period that kept the game 1-0 at the time.

Connor Bunnaman was in the right place at the right time on the Checker’s fourth powerplay of the game. After what seemed like an initial shot went wide, the puck found its way to the blue crease when Bunnaman, having great position, was able to shove the puck home into the Bruins’ net to tie the game at 1-1. That would snap the Checkers’ 0-for-14 skid that they were on over the last few games. The powerplay goal was Bunnaman’s fourth of the season.

At long last, we are on the board! pic.twitter.com/PBRz9a2ou2

After the goal, there was not much action besides the three penalties. The period ended in a 1-1 tie, which meant that Checkers fans would be treated to free hockey in sudden-death overtime. The Checkers did have a 51-second powerplay going into the extra period but it was killed off. Although, the Checkers did not have to wait long for an overtime hero.

The Checkers did have a powerplay going into the period, but the Bruins managed to kill off the powerplay. But Checkers’ points leader Riley Nash would call game 55 seconds into the period. Nash received a pass from Santtu Kinnunen in the slot in between the face-off circles in the Bruins’ zone. He took a couple of strides and sniped the puck past Bruins’ goalie Brandon Bussi for the game-winning goal. The snipe was placed perfectly for Nash to get the winner to snap the Checkers’ five-game losing streak to get the team back in the win column. That was Nash’s 10th goal of the season.

BACK IN THE WIN COLUMN pic.twitter.com/ZTuey9OEIv

That is a great goal to have after being named to the Canadian team roster for the upcoming Spangler Cup. It should give him confidence going into that Cup tournament for Canada and the Checkers as a whole.

Nash would go on to receive the first star of the game for his game-winning goal. Also, Checkers’ goaltender Alex Lyon would claim the second star for his 21-save-on-22-shots performance and the win.

After the game, the press was able to meet up with the first star of the game Riley Nash and Checkers’ head coach Geordie Kinnear.

When asked about how it felt to come away with two points:

“Yeah um, obviously it feels great. They’re a really good team, we’ve kinda played them tough in some games, haven’t been our best in other ones. I thought tonight we played hard for the entire game as the score indicates. There wasn’t a whole lotta room out there. The powerplay got off the schnide too, I think we were 0-for-alot, and to get that one you know your percentage could be crap but you got to score at big times and that was obviously one of those. Hopefully, we can take that confidence and move forward with it.”

He was then asked about how to make sure guys aren’t gripping their sticks tighter when goals are hard to come by:

“Yeah, it’s hard, you can coach a lot of x’s and o’s and you can talk about systems and a lot of things but scoring goals is one of those things where it takes that inner belief, that inner confidence to shoot pucks. I thought we played a really good game last weekend where we had like 45 shots and nothing seemed to go in. Just one of those things where the lid comes off and the guys start to feel a little bit better, and they start to make those plays and start taking that extra half-second to bury it instead of getting a shot on goal. Hopefully, we can start to get more than two or one every game.”

When asked about Alex Lyon playing behind the team:

“Yeah, he’s been awesome. All of our goalies have been pretty good. Trying to get on the same page and read and react off of one another and get on the same groove. Those guys work extremely hard, and we have the utmost confidence in all three of them.”

When asked about getting the two points in tonight’s game:

“We got the result tonight, but I like the way we played in the games we lost. We just stuck with it as a group. It was a total team effort, everyone was pulling the rope in the right direction. Everyone played to their identity and it was a great team win. We want to continue to build and get better. It always feels good to win.”

When asked about the Bunnaman goal and the team buying into how Kinnear wants the team to score goals in the blue paint:

“I think the blue paint, but I think it sometimes doesn’t go your way on the powerplay. If you stick with it and stick with it and get the opportunity to score the goal. He’s had a lot of chances in that area, so it was nice to see him be rewarded for the extra work he has put into practice because ultimately when you practice hard and you put the work in and work at your craft and you do the right thing you get rewarded. I’m glad he got rewarded cause he put the work in.”

When asked about setting a physical tone and was that being the gameplan:

“No, I think that is how we want to be as a group all the way along. We are still young into the season, not super young, we are still finding our way as an identity. Proud of the guys, you have to have emotion, you have to have physicality, and willingness to win one-on-one battles. It’s an important part of the game, it’s something we want to make sure we continue as a group.”

Finally, when asked about Ludvig being back in the lineup and the addition of Smith:

“Great, obviously probably one of the best team wins all year. They are a part of the team. I like what both of them brought to the table.”