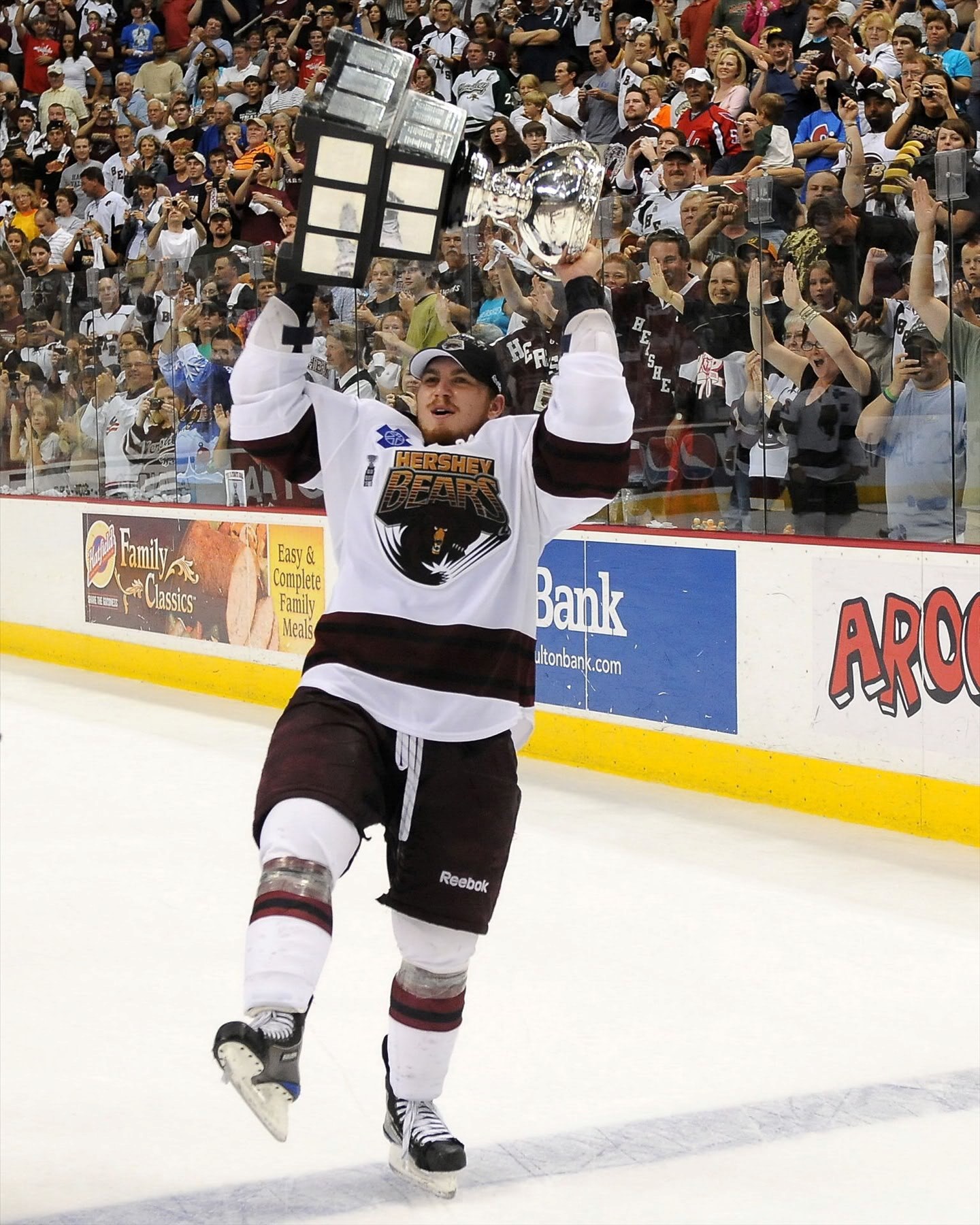 #AHL | On Saturday the @HersheyBears will retire @cbourque17’s jersey #17 in a special ceremony before their game against the @ThunderbirdsAHL. @FPHBears highlights Bourque’s career, and also gives us a glimpse into all of Saturday’s festivities.

Chris Bourque is the only player in Hershey Bears history to raise the Calder Cup three times as a player. Photo via Carl Minieri, Field Pass Hockey.

HERSHEY, Pa. – One of the toughest things to do in the storied 85-year history of the Hershey Bears is to raise a banner. The Bears have a modest number of banners hanging from the rafters at Giant Center, raising banners for their 11 Calder Cup championships and four retired number banners, three of which are shared by two players. There’s a grand total of seven men to receive the honor, but on January 14, a new number will be raised to the rafters belonging to one of the most decorated players to ever don the Chocolate and White colors: Chris Bourque‘s number 17. Bourque’s list of accomplishments during his time in Hershey is lengthy, but most importantly contains three Calder Cup titles and five trips to the championship round, a feat the Bears have not accomplished without him since the team captured the title in 1997, and a jersey retirement hasn’t been done in almost as long, since 2002. He’s the only person in team history to win the Calder Cup three times as a player, and it’s the tip of the iceberg in regard to what he did as a Bear.

Son of the legendary Ray Bourque, there was seldom a game in Hershey that Chris Bourque did not factor into as a near point-per-game player with 586 points (196 goals, 390 assists) over 604 regular season games in a Bears sweater. The mark is good for fifth all-time in team history and the top American born player on the list, and he’s the only player in team history to lead the club in scoring on two separate occasions. Five of his six American Hockey League All-Star appearances were as a member of the Bears, and he is the franchise’s all-time playoff points leader with 86 points (26 goals, 60 assists) in 106 postseason appearances. Bourque had a tendency to net some memorable moments with the Bears, including the overtime game-winning goal in Game 2 of the 2010 Eastern Conference Final over the Manchester Monarchs.

“Some legendary players have played here,” Bourque said at his media availability event on Thursday. “The history of the Hershey Bears, obviously the most historic franchise in the American Hockey League, it’s an honor to be recognized by having my number up there with those guys. I have a good relationship with Mitch Lamoureux, he’s such an icon in this town, to have my number up there with him is exciting.”

Feels like the right time to re-live this classic goal! #CB17 pic.twitter.com/15YsPgfO6Q

In a lot of seasons in which the Bears had a ton of incredible scorers, Bourque always did his share to help the Bears to a victory. He debuted for the Bears way back on October 8, 2006, and tallied a pair of assists in his second game a day later. with nine over his first ten games in Hershey. It was a sign of things to come, as he’d play 58 regular season games and one playoff game as the Bears lifted their ninth championship. It was the start of a memorable stretch where the Bears won three championships and went to the final round in four of five seasons, registering 70+ points in each of Hershey’s back-to-back championship seasons from 2008-2010. Bourque won the Jack A. Butterfield trophy in 2010 as the Most Valuable Player in the Calder Cup Playoffs. Impressively, an often-neglected statistic is that his best season in Hershey came in his return to the Bears in 2011-12, where he tallied 93 points (27 goals, 66 assists) that ultimately stood up as a single season best in his AHL career. Current Bears Vice President of Hockey Operations Bryan Helmer was a teammate of Bourque’s during the back-to-back championship run and revered his desire to be in the midst of big action.

“Chris is the type of player that wanted to make a difference,” Helmer said. “He wants to throw his team on his back and win the game with the puck on his stick. He makes people around him better. He came into Hershey at a young age and matured as a person. He’s a big game person and a big reason why we won the Calder Cup in 2010, hop on my back and let’s get going. It’s contagious, everyone follows along and it’s a great quality.”

For all the success that the Bears and Bourque had together, the years that the two were separated ultimately saw the Bears face off with Bourque in the Calder Cup Playoffs. Bourque netted six points as a member of the Providence Bruins that eliminated the Bears in 2013 and 11 points over six games in a Hartford Wolf Pack uniform in 2015, separated by a stint overseas in 2014. The Bears faced off with their old friend one last time in the 2019 Calder Cup Finals, where they were able to limit him to one assist and won in overtime in a fifth and decisive game. After his heroics in 2015, the Washington Capitals organization brought Bourque back on a two-year, two-way contract that paid immediate dividends. Bourque scored the overtime game-winner in his return to Giant Center and hit 80 points (30 goals, 50 assists) and led the Bears back to the Calder Cup Finals for the first time since 2010. The season was special for Chris, as the Capitals acquired brother Ryan Bourque at the end of February. Ryan played 19 games that season and 21 postseason games as Hershey downed the Wilkes-Barre/Scranton Penguins in overtime in Game 7 and came only four wins short of a championship title.

He’d be an integral part of Hershey’s 2016-17 squad that fell short of returning to the final round, and even as the Bears struggled in his last season in 2017-18, Bourque still had 53 points in 64 games including a memorable overtime winner against the Penguins on Teddy Bear Toss Night. He’d play his last game in a Hershey sweater on April 15, 2018, as the two mutually opted out of the option for Bourque to return in 2018-19 as part of his contract signed the year prior.

Go with an OTGWG on teddy bear toss night! pic.twitter.com/WA8jph33T6

After one year with the Bridgeport Sound Tigers, Bourque went overseas to play in the Deutsche Eishockey Liga for three seasons before officially announcing his retirement at the end of April of 2022. The Bears quickly made arrangements to retire his number, revealing Saturday’s date ahead of their promotional calendar in early August, and the road was paved for the ceremony on Saturday. It’s a fitting way to honor Bourque’s unique contributions to the Bears as the only player in the Giant Center era to receive the distinction of a jersey retirement, and with the 2022-23 season also celebrating the 20th season of since the arena became the team’s home, it speaks to how truly difficult of an honor it is to receive and how special the ceremony will be.

“It’s very special. Driving in here last night and waking up here, I get such a special feeling coming back here. It’s a special place, very meaningful to myself and my family, my two kids grew up here and I played a good chunk of my career here. Just a happy place, you get such a good, warm feeling when you come back to Hershey. Very fond memories and that all comes flooding back when you drive in. I got that feeling coming back as a visitor to play the Bears, it’s such a special place to play and playing in this rink never got old.”

“The history, obviously you’ve got all the Calder Cups and all the legendary players that have played here, you go up and down the list of people that have played here, and it seems like everybody had a pit stop or spent some time in Hershey. Whenever you talk about historic places to play, Hershey is always at the top of the list.”

The Bears will be hosting a ceremony to honor Bourque and raise the banner beginning at 5:45 PM EST with doors opening to fans at an extended time at 4:45 PM EST. The first 10,000 fans in attendance will receive a replica of the banner that will be hung in the rafters at Giant Center, and the team will be wearing special warm-up jerseys resembling the ones Bourque hoisted the Calder Cup in during the 2009-10 season. The jerseys, which will all bear the number 17 along with the player’s name, will be auctioned off with a portion of the proceeds going to local charities. Per the team’s official release, beneficiaries include the Leukemia & Lymphoma Society, American Cancer Society, Ronald McDonald House of Central PA, and Big Brothers Big Sisters of the Capital Region. Chris Bourque, in partnership with the Bourque Family Foundation, helped select some of these beneficiaries based on the close working relationship he had with these organizations during his time in Hershey.