ALLEN, Texas – It will be a different Christmas week around the ECHL this week, another adjustment to COVID-19. The league usually has a three or four-day Christmas break where teams do not play and aren’t allowed to practice. Players typically go home, take a trip to Las Vegas or Mexico, or use the days off to relax and spend time with family and friends if they are in town. Not the case this season as there is no Christmas break and players are expected to stay in their quasi bubble. The Americans will practice this week as they prepare for two games this weekend at home against Tulsa. My guess is coach Martinson will give the team some time off other than Christmas day but will practice on Monday and Tuesday for sure. 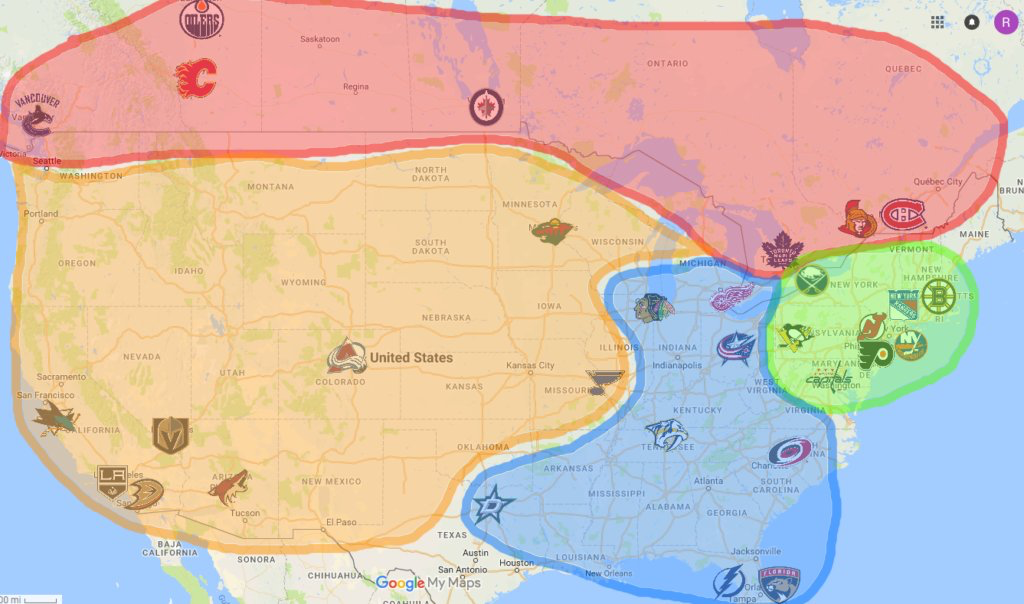 There was big news yesterday regarding the start-up of the NHL season as an agreement was reached to start the season on January 13 with training camps starting as early as December 31 for the seven teams (including San Jose) that did not participate in the qualifying playoff round last season. The other 24 teams start training camp on January 3. Teams will be divided into four divisions with a 56 game regular season. The teams in the East, Central and West Divisions will play the other teams in their division eight times, it will be nine or 10 times in the North Division. The regular season runs through May 8 which is interesting since the ECHL 72 game schedule runs through June 6. Here is a map I found on Twitter that shows the four NHL divisions.

Here is a good article about all of the details related to the NHL startup. It is written from the perspective of the LA Kings so items such as attendance will vary from location to location but this story covers a lot of issues if you are interested in more details:  https://lakingsinsider.com/2020/12/20/2020-21-season-details-quotes-division-roster-schedule-training-camp-more/

The question I have is what will the agreement the NHL just worked out have on the ECHL and specifically the Allen Americans? There should be little impact when NHL training camps start because teams will be limited to 36 skaters, fewer than typically attend NHL camps. Goalies attending NHL camps could be an exception because there is no limit on the number of goalies brought to camp.

What will likely lead to an impact on the NHL/AHL contracted players assigned to ECHL teams is tied to a 4-6 player taxi squad each NHL team will carry. Also part of the agreement is a requirement all NHL teams will travel with three goalies. The NHL is trying to create a safety net with the extra players who are able to practice with the team, travel with the team but do not count against the 23 player roster or salary cap unless they are “recalled.”

It is not clear yet what impact the new NHL rules will have on the AHL. The AHL will likely start training camp in mid-January to prepare for their tentative February 5 start date. Just like the ECHL, it is expected some AHL teams will opt out of the 2020-21 season because of COVID-19 restrictions. San Jose has already said the Barracuda will play even if they have to relocate out of California for the start of the season. FYI, the San Jose Sharks will have training camp and start the season in Arizona.

This is just my opinion but you could see a worst-case scenario for ECHL teams where AHL teams have 4-6 players taken for the NHL taxi squad, they will recall most if not all of their contracted players currently assigned to ECHL teams in mid-January when AHL training camps begin.

You could also see AHL teams needing to sign free agents to fill up their rosters so they may come after ECHL players like Dyson Stevenson, Turner Ottenbreit, Les Lancaster, and Sam Laberge who have AHL experience and could sign with any AHL team.

Another scenario would have a bunch of AHL teams opt out of the 2020-21 season and the market become flooded with even more players looking for jobs.

What this means for Allen is coach Martinson has to be planning for all eventualities. I think the most likely of all of the possibilities is most of the eight NHL/AHL contracted players on the Allen roster (3 San Jose, 5 Iowa) will be recalled when AHL training camps begin.

Coach Martinson has always made changes early in the season and even with all of the uncertainty this season you can be assured he is trying to improve the roster every day. Contract player assignments, signings, waivers, and trades are not suspended during Christmas break as in the past so anything can happen at any time. The only certainty is there will be changes, if not this week in the next couple of weeks.

After three games the Americans leading scorers are Sam Laberge with four points (1G, 3A) and Les Lancaster with three points (1G, 2A). Proving Allen’s depth, 10 players are tied for third in scoring with two points.

It is still very early in the season but here is how Allen ranks among the 13 ECHL teams that are playing:

Average COVID restricted attendance for all 10 ECHL teams that have had one or more home games:

DID YOU KNOW: Here are some names from the past you will recognize. Ten years ago today Allen played Bossier-Shreveport at home and beat the Mudbugs 6-2. Here were the goal scorers with assists:

The 2010-11 Allen team dominated the regular season with a record of 47-16-3. The Americans 97 regular-season points were the highest in the league (CHL) by 14 points and they won their conference by 20 points. The dominant regular season turned into disappointment in the playoffs as the Americans lost in five games to Bossier-Shreveport in the conference finals. The Mudbugs went on the win the CHL championship against the Colorado Eagles but two weeks later ceased operations citing low attendance and financial issues.