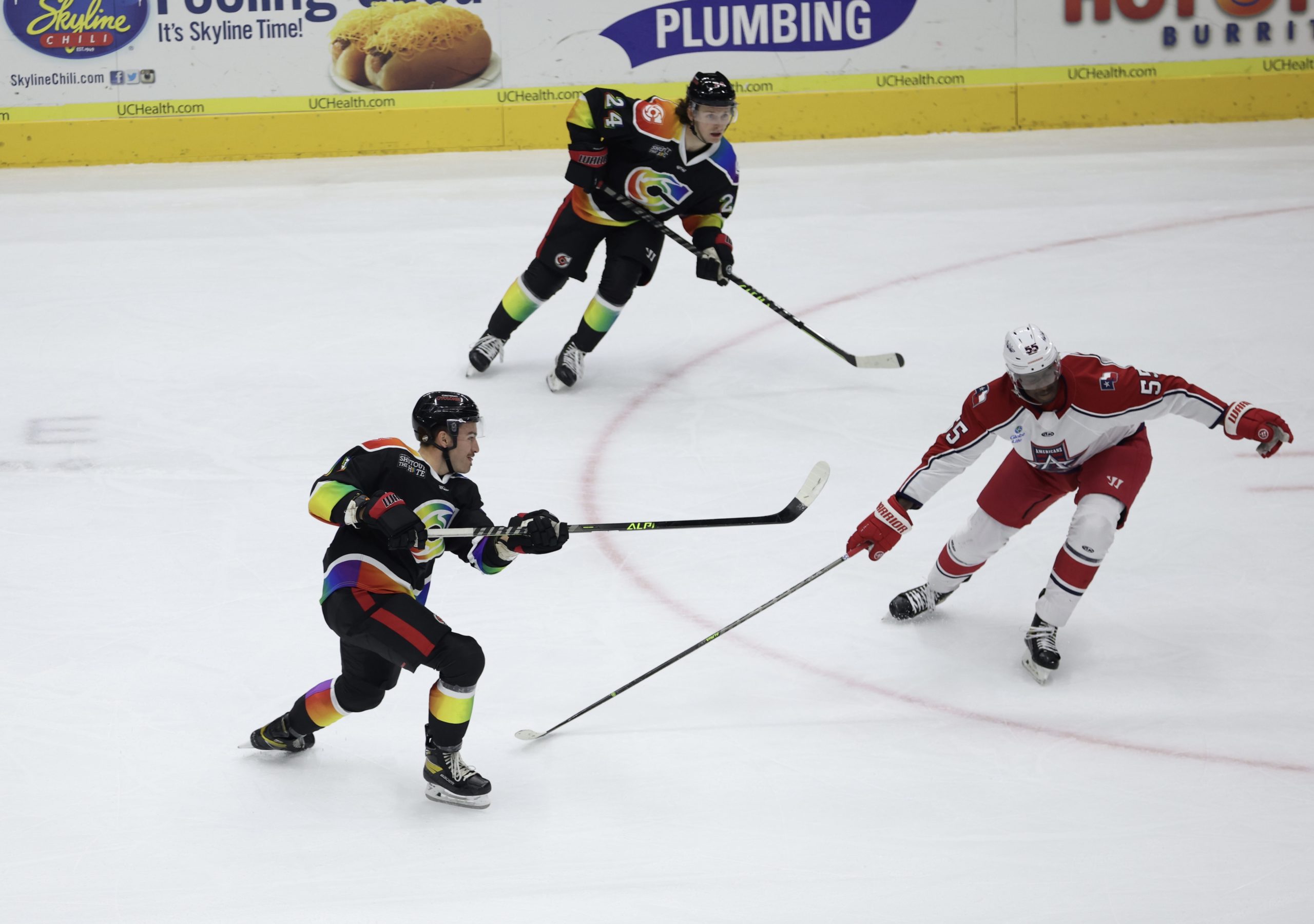 Cincinnati Shares Message of Acceptance Ahead of Victory

Cincinnati Shares Message of Acceptance Ahead of Victory

CINCINNATI – Theme nights in professional hockey are usually full of fun, life, and sometimes a little bit of quirky humor. However, Friday night’s “Shut Out the Hate” night at the Heritage Bank Center in Cincinnati was about a cause much bigger than the sport. On the ice, the Cincinnati Cyclones bounced back from their first loss of the season to take a 4-1 victory over the Allen Americans.

Off the ice, this game was about celebrating diversity and sharing hope about someday achieving full inclusivity in the sport. From specialty pride jerseys worn by the home Cyclones to representatives from Cincinnati Pride cranking the storm siren to start the third period, the message was on display all night.

Shut Out the Hate

One message was clear across Heritage Bank Arena last night. “We accept you as you are. You are welcome here.” Now, this message isn’t a cliche PR statement. This message is truly one that is taken seriously by the Cincinnati Cyclones as an organization and by their coaches and players. This is a message that they want to share with their community and use it to better the lives of those around them.

The @heritagebankctr lights are aglow ahead of tonight's Shutout the Hate night between the visiting 4-4-1-0 @allenamericans and 7-1-0-1 @cincycyclones.

Before the game, Sarah Hastings, Director of Development for Equality Ohio, shared the excitement and importance of games like this for the community.

“Equality Ohio is thrilled to be in the Cyclone’s barn for Shut Out the Hate. In Ohio, a state where elected officials are targeting transgender children for playing sports, nights like this are a deserving moment of celebration for our community. Shut Out the Hate invites inclusivity to the rink at a time when many elected officials are trying to push us back into the closet. The truth is, LGBTQ+ Ohioans are valuable to Ohio, and we’re not going anywhere.”

As the ECHL’s third person of color to serve as the head coach, and the first to do so in Cincinnati, head coach Jason Payne works daily to help promote inclusivity within hockey. Part of this is through his work with the Cincinnati Cyclones Foundation in growing the game at the youth level in the Greater Cincinnati Area. Perhaps even more inspiring is the work Payne puts in with his players and staff with his message of support in having uncomfortable conversations and providing resources whenever they are needed.

“It’s a great opportunity for people who are free to have those uncomfortable conversations and people that may not know where to turn to if they need to have those conversations. As an organization here with the Cyclones, we want to hopefully provide resources and avenues for people to reach out to someone to talk to. It’s okay not to be okay. We want to make sure that hockey is for everyone. Let’s make hockey for everyone. Let’s open hockey, let’s open the doors for everybody. And, again, I thought the whole event tonight was it was a great accomplishment, and a great turnout as well. And I’m happy that we got a win to cap it off.” – Payne

Let’s make hockey for everyone. That’s the quote that really stuck out for me. So much is said and celebrated about hockey already being for everyone. However, much work still needs to be done to help bridge socioeconomic and other gaps within the sport. Payne elaborated on that for us after the game.

“The sport of hockey is an expensive sport. It is what it is. You know, there’s many people, many avenues that are trying to, I guess, outsource or find different outlets for people that can’t afford to play. And then providing equipment to the underprivileged and anyone to learn to play, learn to skate all the programs that we’re trying to get to the grassroots and open it up to the young kids. Open it to everybody: boys, girls, doesn’t matter who you are. Open it up to everybody. Give them an opportunity to play the game. And again, it’s a tough situation talk about because, yes, it’s an expensive sport. There’s a lot of out there who could be the next superstars. They just can’t afford to play. Being able to provide those resources.. and finding out more about the person that maybe they do like the sport and maybe they have an opportunity to play but they can’t afford it. Whatever the case may be, we’re here to provide that opportunity to provide that resource and hopefully provide that platform as well.” – Payne

Cyclones defenseman Josh Burnside also shared his thoughts post game, ones that, again, echoed the overall message of the night. When asked about what the phrase “Shut Out the Hate” means to him, he stated:

“For me, I have no room for it (hate) in my mind, in my life. Everybody’s accepted as, as as they are. So as you come, I accept you.” – Burnside

His overall wish is to see more people like him, a player of color, in sports- especially on a professional level. He feels that the number of players coming through the professional ranks is “getting a lot better now,” but there’s still work to be done.

Having theme nights and messages shared with the community like Pride Night or any game celebrating underrepresented or minority groups has a place in professional sports. Though, having an organization backing up the message is essential in giving the night true meaning and value.

The Cyclones are doing just that in Cincinnati.

Turning our attention back to the ice, this had all the makings of a statement game for the Cyclones. Following their first regulation loss on Wednesday (5-4 against the Americans), they looked determined, poised, and focused.

Call it fate, deja vu, or maybe simply a re-do, but the play on Friday had plenty of callbacks to Wednesday’s matchup between the two teams.

For the second straight game, Lincoln Griffin tallied two goals in a game, continuing a four-game goal streak. Though, instead of serving as a catalyst for a rally that fell short, Griffin’s first goal on Friday was the game-winner.

Also putting in a stellar performance was Cyclones goaltender Beck Warm. After a whirlwind week with a call-up to the American Hockey League’s Rochester Americans, the reigning ECHL Goaltender of the Month was back to form, almost pitching a shutout. In a goaltending rematch from Wednesday, Warm earned the win over Allen’s Luke Peressini.

At times, Peressini was single-handedly keeping his teammates in this game. Now, I’m not saying that Allen’s play was terrible or anything, but they were simply outplayed by Cincinnati all night. In the opening minute, he turned away a Justin Vaive breakaway. That breakaway was the second in the opening minute, with Allen’s Hank Crone getting the first chance one-on-one with Warm. Peressini also denied an almost hat trick by Griffin, among several other high-danger chances throughout.

Perhaps the true highlight of the night was the first professional goal by rookie Dakota Betts. This kicked off a two-point night for the 21-year-old.

Dakota Betts with a strong effort to keep possession and get the first goal of the night- and his pro career.

Zack Andrusiak and Lincoln Griffin with the assists.

The lone Allen Americans goal came a little over halfway through the third period. Jack Combs found himself all alone in the neutral zone with nothing between him and Warm. A shootout-like attempt later, and he gave his teammates some hope for a late rally.

A 4-on-4 goal by Jack Combs gives the @AllenAmericans a breath of life here in the third period.

He had wide-open ice thanks to a loose puck and backhanded it behind Warm.

Dajon Mingo dashed those hopes with an empty-net goal at 18:15 of the third. This was his second goal and sixth point in the last five games.

Warm finished the night with 32 saves. Although he was credited with 46 saves, Peressini was handed the loss.

Quote of the Night

“Dakota is a young player fresh out of the OHL. I’ve been tracking him for quite some time. He’s very mobile, thinks the game well, and he’s (got) a super pro style of hockey. It’s just a matter of time before he gets out and gets an opportunity. And he did today. So, it’s easily evident to see and I thought he played a great game today. And we’re happy for his success.”

In what promises to be an electric tilt, the Cyclones welcome the Toledo Walleye on Thanksgiving Eve. This is the first matchup between these teams since the 2022 Kelly Cup Playoffs. Meanwhile, there’s no rest for the Allen Americans as they square off against the Fort Wayne Komets later today at 6:30 p.m. Central.