DES MOINES, Iowa – It was school day at Wells Fargo Arena on Thursday, as 11,264 enthusiastic children from local schools packed the arena to learn the finer aspects of the game of hockey.

DES MOINES, Iowa – It was school day at Wells Fargo Arena on Thursday, as 11,264 enthusiastic children from local schools packed the arena to learn the finer aspects of the game of hockey. They received quite a lesson, as Chicago Wolves goaltender Garret Sparks stopped all 35 shots he faced to lead the Wolves to a 3-0 victory over the Iowa Wild. Tye McGinn scored a goal and added an assist as Chicago pulled to within two points of Iowa in the Central Division.
The Wild took control of the contest early, firing the first five shots of the contest on Sparks, but the Wolves goaltender masterfully brushed aside each attempt. The Wolves fed off the play of their goalie, taking the lead at 11:19 of the first.
While on the power play, the puck came back to Jimmy Schuldt at the point. He blasted a slapshot that Patrick Brown deflected past Wild goaltender Kaapo Kahkonen and in for his sixth goal of the year.
That woke up the Wild, who controlled play through the final eight minutes of the frame, outshooting the Wolves 5-2. Iowa finished the period with a 10-4 advantage in shots, but they had no answers for Sparks, who made the 1-0 lead stand. 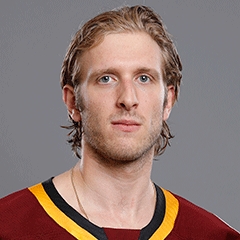 The Wild came out of the first break on fire, as star forward Gerald Mayhew had four golden opportunities for a goal within the first 24 seconds of the period. In response, Sparks made two absolutely brilliant saves to maintain the lead. Iowa had an 8-1 edge in shots through the first eight minutes but could not find the formula against Sparks.
The Wild were dominating play much as they had in the first, outshooting Chicago 12-5 through the first 17 minutes, but it would be the Wolves who would find the back of the net at 17:10. With the faceoff deep in the Iowa end, Chicago won the draw. Lucas Elvenes took the puck behind the Iowa net before firing a pass to McGinn who was cruising down the slot. McGinn blasted the one time by the blocker of Kahkonen for his fourth goal of the year.
In the third, the Wild were relentless on the forecheck. The Wolves were happy to oblige, playing a prevent defense to preserve the 2-0 lead. Chicago had two of the first three shots of the period, then it was completely dominated by Iowa.
With a little less than four minutes left in the game, the Wild pulled Kahkonen for the extra skater, but it would be Chicago that would capitalize. McGinn passed to Curtis McKenzie, who fired in the empty net goal for his third tally of the season.
Iowa tried to at least break the shutout, peppering Sparks with five shots in the final three minutes. That included a pass to Cody McLeod in front who had what appeared to be a wide-open net, but Sparks flashed his glove like a cat to make the save.
The shutout was the first recorded against Iowa since Cleveland blanked the Wild on April 3, 2018. Kaapo Kahkonen also saw his personal six game winning streak come to an end.
The Wild will take on the Ontario Reign on Saturday night at Wells Fargo Arena. Game time is set for 7:00pm CST.
Follow Robert on Twitter for all your news and updates regarding the Iowa Wild!