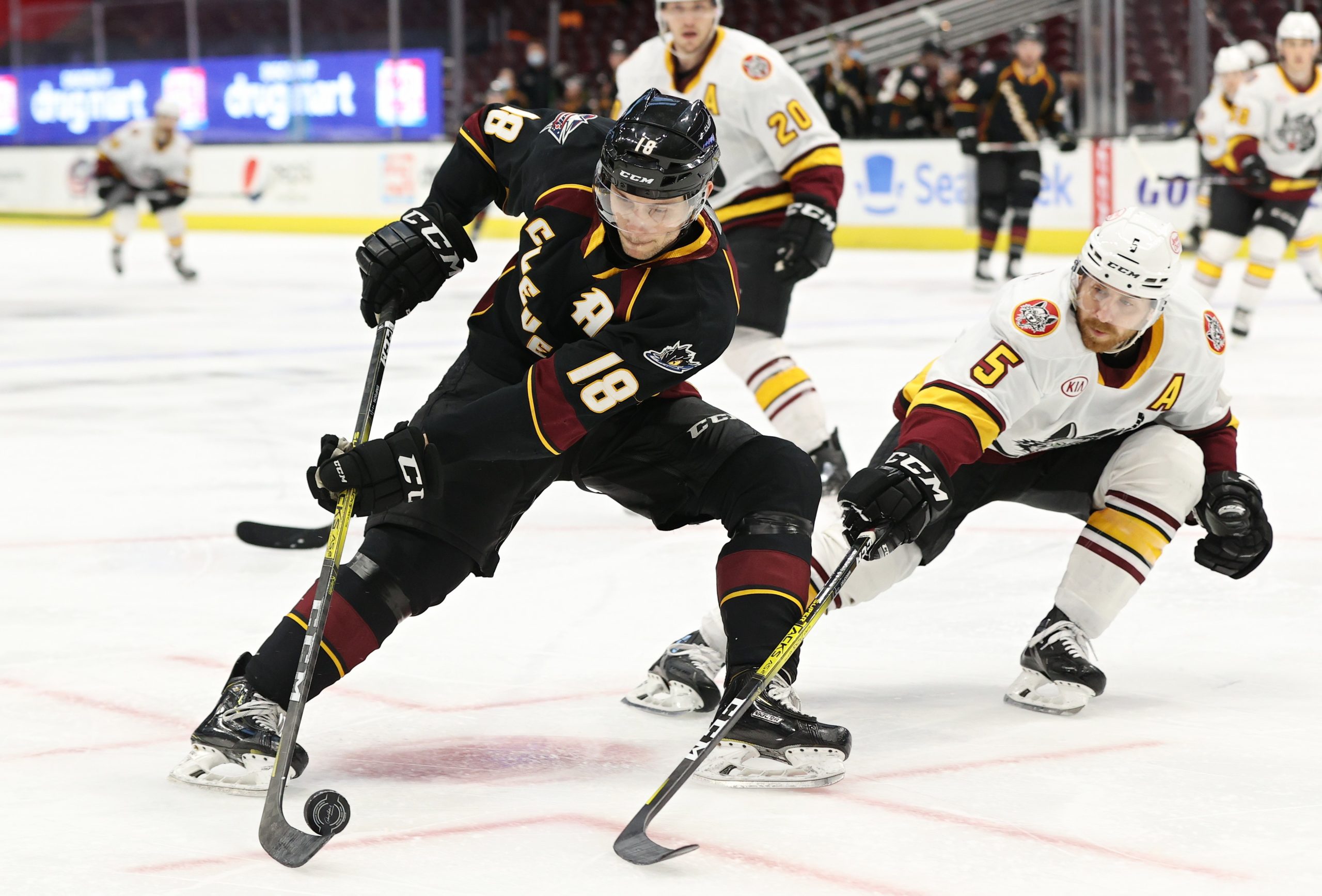 CLEVELAND – When two of the top three teams in a division face off, you can usually expect fireworks. That was most certainly the case in Cleveland, where the Monsters took on the American Hockey League’s second-place Chicago Wolves. Following a disappointing series in Grand Rapids, the Monsters were hoping to get back to their winning ways, which they did in a nerve-wracking and entertaining fashion.

It didn’t take long for each team to get into the groove. While the Monsters excelled in using their bodies to knock people off the puck, the Wolves used every resource to break up passes.

Though, just 4:54 into the game, Dillon Simpson tapped a bouncing puck over a sprawling Luke Evangelista. Tyler Angle collects the puck and outraces Frederic Allard to sink the puck past Wolves netminder Beck Warm with what seemed to be magical powers.

I don't know how Tyler Angle took control of the bouncing puck, but he did. A short skate and a flip of the puck makes it 1-0 Cleveland at 4:54.#CHIvsCLE pic.twitter.com/y5GxQzDalB

All within the next minute, Monsters goalie Daniil Tarasov battled off a blazing Evangelista shot and found himself on the wrong end of a two-on-one. Phil Tomasino controlled the puck the whole way from the Monsters zone. Though Brandon Crawley took away the passing lane, Tomasino was able to both get the shot on Tarasov and sink the rebound to make the score tied at one.

The rest of the period featured some fancy footwork on both sides of the puck, more breakaways (most notably for the Monsters with Matthew Struthers connecting with Luke Moncada), and spectacular saves.

Another feature was the Monster’s blazing hot power play. Adam Helewka connected with Carson Meyer, who snapped it past Warm for the 2-1 tally. After that goal, the Monsters were tied for third in the league for power-play goals scored.

Chicago thought they tied it up again late in the period with a Max Lajoie slapper, but it was called off as the Cleveland net was off the moorings. Since the AHL does not have video review this season, the call on the ice stood. 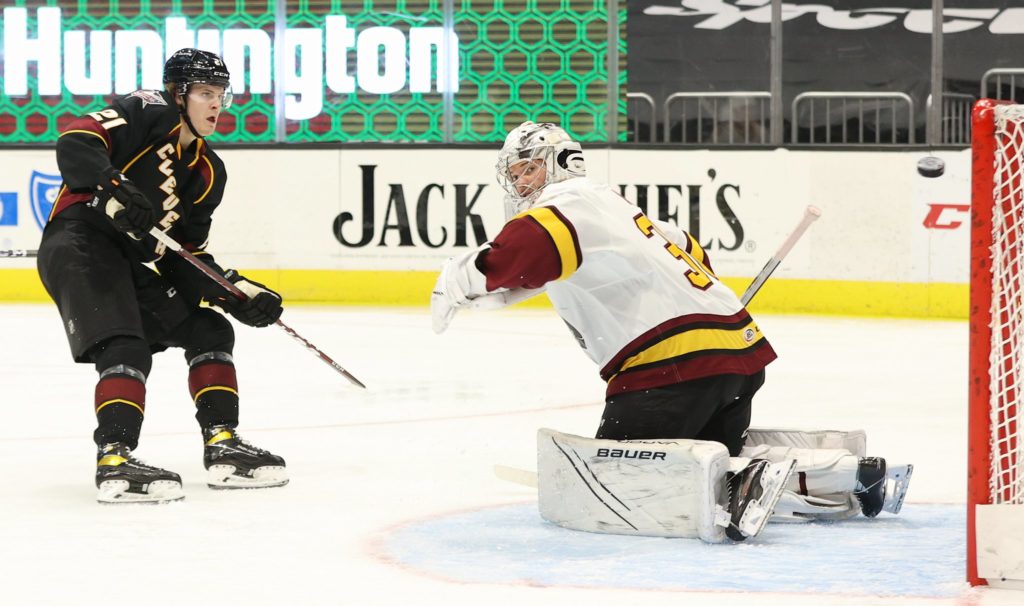 The Wolves controlled the second period. No other way to put it. The Wolves found ways to force the Monsters to resort to long passes and get overly creative to make the simplest plays. They also neutralized Cleveland’s offensive weapons, forcing the playmakers to be the ones to take the shots.

Luckily for Cleveland, Tarasov and their defensemen were at the ready. The Wolves had plenty of prime opportunities to run away with the game, but Cleveland held on just well enough to prevent it.

That is until 8:19 of the period. David Warsofsky found Zach Solow on a long stretch pass. Solow masterfully sunk the puck past Tarasov for both the tieing and his first professional goal.

Late in the period, Cleveland looked to get settled back in their game. Another two-on-one rush topped this off with under a minute left. Helewka and Tyler Sikura teamed up to get Sikura’s first of the night and regain the lead, 3-2.

Where the Monsters ended the second, they instantly resumed in the third. During the power play from a Spencer Smallman penalty just 1:00 in, Sikura notched his second of the game. Meyer had the initial shot on Warm, where the puck ricocheted off both Thomas Schemitsch and Josh Healey. Sikura tracked it the whole way and was able to gain control and slip it past Warm to make it 4-2 Cleveland.

Chicago wouldn’t go away quietly, getting two goals from Healey and Cole Smith just a little over three minutes apart from each other. Healey’s was a heater from the left point. Smith’s shot was simple yet effective right off the faceoff.

This time it was Cole Smith who was just hanging out on the half wall.#CHIvsCLE pic.twitter.com/R44J76BaSc

Both teams seemed to play calm and cautious hockey for the remainder of the third. Both seemed content to wait each other out, yet being aware enough not to make any dumb plays.

Chicago’s best opportunity showed itself with only 2:15 left in regulation. Cleveland’s Ole Bjorgvik-Holm was called for high-sticking. Cleveland, once again, was able to hold on to send this one to overtime.

Overtime was… insane. It was some of the most entertaining hockey I have seen in some time. It featured everything from broken sticks, breakaways, and a heart-stopping moment for the 4,148 fans in attendance. For the second time in the game, Chicago’s Dominik Bokk was able to get the puck past Tarasov, but it sailed off the right post.

With under a minute remaining, Cleveland would put the cherry on top of this cake. Liam Foudy and Angle emerged on an unopposed breakaway. A little give and go, and the Monsters win 5-4 against the Wolves in overtime.

Silly Stat of the Game

The water bottle of each goaltender was knocked to the ice during live play. The teams were 0-2 on scoring any goals during that time.

Postgame, Monsters head coach Mike Eaves commented on the differences between their play:

“We really liked our first period. It was a good period of hockey, well played on both sides. We were doing things we wanted to do. We want to play fast, simple, and with poise and confidence with the puck. The second period? We didn’t do that as much. We got away from that, if you will. That’s the simplest way to put it. As a result, we found ourselves in our zone more than we wanted to. The third period was about setting our mind correctly and going back to what we did in the first.”

Meanwhile, Foudy shared his thoughts on why the Monsters’ penalty kill has been doing so well:

“We have a good system that the coaches have put in place. We’re all on the same page. We know what we need to do. Luckily enough, Angle and I work really well on it and got some chances out there. Usually, from what I learned in the past, power play aren’t expecting to play defense as much. They aren’t as ready for guys to attack. We are always ready to strike and it works out for us most of the time.”

Helewka reflected on his three-assist night:

“When you pass the puck to good players, good things happen, to be honest. Sikura, myself, and Meyer have been playing really well lately: clicking alot and getting chances like that every game. Just playing the same way we have been lately and putting our chances in the net is kind of all we had to do tonight.

Finally, Angle talked about getting both the opening and game-winning goal.

“If you look at the guys I’m playing with, it’s not the hardest to do. I mean, you are just trying to find some open ice and they’re going to hit me. Tonight, I found that open ice. Obviously Fouds (Foudy) and Simmer (Simpson) both made some great plays to me and I capitalized on that.”

The Cleveland Monsters and Chicago Wolves wrap up their season series on Sunday, April 25th at 4:00 at Cleveland’s Rocket Mortgage FieldHouse.