HISTORY OF THE CLEVELAND LUMBERJACKS

Following a 14-year hiatus of professional hockey in Cleveland, the Lumberjacks brought it back in exciting fashion for the 1992-93 season. The team relocated from Muskegon, Michigan, and played in the International Hockey League’s Atlantic Conference. Much to the excitement of the locals and nearby NHL fans, the Lumberjacks serviced as a minor league affiliate of the National Hockey League’s Pittsburgh Penguins.
For their first two seasons, the Lumberjacks played in the Richfield Coliseum. Led by Head Coach Phil Russell, the team tallied 87 points, good enough for seventh in the 12-team IHL. Despite their low standing, the club drew an average of 5,211 fans each game. This was just a glimpse of the city’s passion and love of their hockey team, one that is well prevalent today with the Monsters.
At the end of the season, Russell was removed as head coach and replaced by Rick Paterson, who would serve for four seasons.
Starting in the 1994-95 season, the Lumberjacks began to play at the Gund Arena (now known as the Rocket Mortgage Fieldhouse) in downtown Cleveland. By the end of that season, the team made the IHL playoffs with a 34-37-10 record. Fan attendance was up with the new arena, drawing an average of 8,500 each game.
Fun fact – The Lumberjacks actually skated as the Chicago Blackhawks in the 1995 movie Sudden Death starring Jean-Claude Van Damme!
The most successful season for the Lumberjacks came in 1996-97, where they lost in the Eastern Conference Final series to the Detroit Vipers. This also signaled a series of changes for the organization. Not only did their 12-year affiliation with the Penguins come to a close, but there were also changes in the coaching staff — Perry Ganchar stepped in, replacing Paterson.
Not having an NHL affiliate allowed the team to act as an independent organization. However, this changed with the 1998-99 season when they signed a two-year affiliation contract with the Tampa Bay Lightning. Unfortunately, this affiliation was cut short when new ownership took over in Tampa Bay and bought out the second year.
The Lumberjacks then signed yet another affiliation agreement, this time with the Chicago Blackhawks. This new agreement saw the team through a successful 1999-00 season. In fact, the team made it to the semifinals of the IHL’s Turner Cup Playoffs. They would fall to the Grand Rapids Griffins four games to two in a best-of-seven series. Perhaps the most well-known Lumberjack alumni in Cleveland, Jock Callander, broke the IHL record for career points during the campaign with 1,402. He would retire at the end of the season, proudly playing 18 pro seasons, all but three with the Lumberjacks. His number 15 now hangs in the rafters at Rocket Mortgage Fieldhouse.
The most significant changes came during the 2000-01 season. With a new season came a new affiliation, this time with the NHL expansion Minnesota Wild. The team was sold from the original owner, Larry Gordon, to businessman Hank Kassigkeit. New coaches also were brought into the mix, including Head Coach Todd McLellan and assistant coach Callander.
Despite strong fan support early on in their stay in Cleveland, the team was in trouble. With no television or radio contracts and upset fans thanks to the constant cycle of affiliates, the team almost folded midway through the season. Attendance plummeted to an average of 4,227 fans a game. To keep the team from folding, IHL President Doug Moss sued Kassigkeit and took control of the franchise in February 2001. The team managed to persevere and made the playoffs, losing to Grand Rapids in the first round.
However, that would spell the end of the International Hockey League as a whole, as it ceased operations after the 2000-01 season.

Several high profile and successful players spent time with the Lumberjacks. These include:

To celebrate and recognize the contributions of the Cleveland Lumberjacks, the Monsters honored them in their two games against the Milwaukee Admirals on January 3 and 4. Cleveland wore the IHL Lumberjack jerseys, while the Admirals also donned IHL throwbacks (albeit from their inaugural 1970-71 season). Rocket Mortgage Fieldhouse was transformed to teal, and the Lumberjacks mascot Buzz was on hand to entertain, as well. 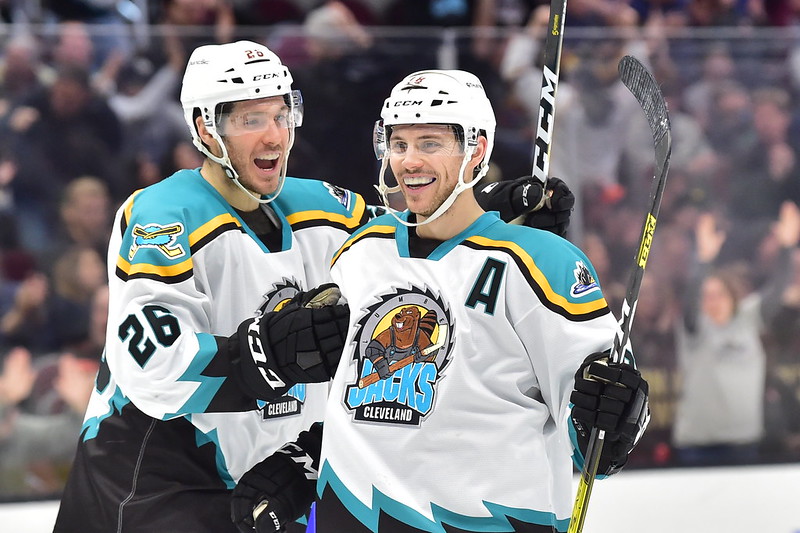 Cleveland defeated Milwaukee 3-2 in overtime on Friday and 5-4 in regulation on Saturday, going 2-0 on the weekend in their throwback Lumberjacks sweaters.
Follow Deana on Twitter for live, in-game coverage and all your off-ice news & notes regarding the Cleveland Monsters! Don’t forget to follow The Sin Bin on Twitter and Facebook for all additional AHL, ECHL, and SPHL minor league hockey coverage!