CLEVELAND – Get ready, Cleveland. Monsters hockey will be back on Friday, October 15, at 7:00 p.m. After two shortened seasons due to the pandemic, the Monsters look to get back to a full season full of action, excitement, and plenty of cheering fans. So, get out your calendars, phones, plans, or whatever you use to mark down important dates and prepare yourself now.

This upcoming season will be the Monsters’ 15th AHL season in Cleveland and the seventh as the top affiliate of the NHL’s Columbus Blue Jackets.

After one season in the Central Division, the Monsters find themselves back in the North. Here, they will rejoin old foes in the Belleville Senators, Laval Rocket, Rochester Americans, Syracuse Crunch, Toronto Marlies, and Utica Comets.

Don’t think geographical rivals Grand Rapids Griffins and Rockford IceHogs are a thing of the past though. Cleveland will be facing off against them multiple times this season as well. 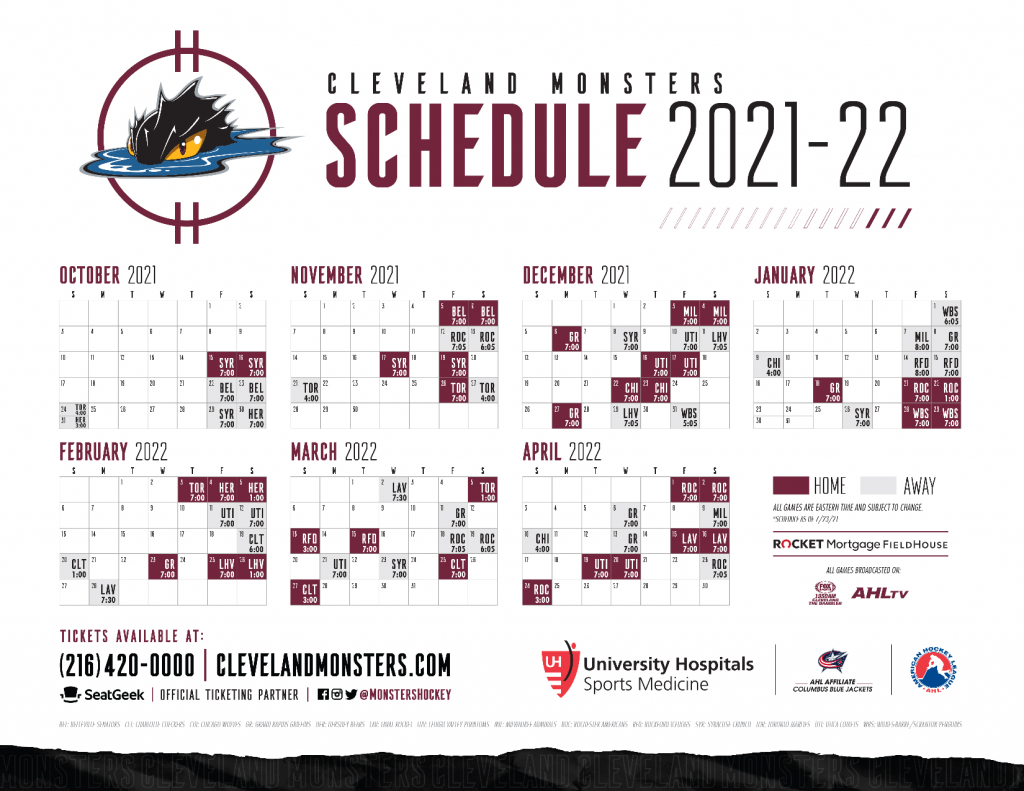 It’s already been mentioned, but the first date you need to write down is October 15. That’s the home opener versus the Syracuse Crunch. The Monsters and Crunch didn’t face each other last season thanks to a temporary divisional alignment and shortened season.

October 22 – 24: This will be the first trip back into Canada and the first of three three-in-three game stretches for the Monsters. The first two are on the road on back-to-back weekends. First is two games in Bellville followed by a game in Toronto. The following weekend is another three-in-three with one game in Syracuse followed by two in Hershey.

November 5: Just the third home game, but it is the first time a Canadian hockey team will be back in Cleveland since the border closed in response to the COVID-19 pandemic.

December 3,4, and 17: One of these will be the Teddy Bear Toss game. A fan favorite, this game is full of joy. Honestly, who can resist all sorts of stuffed animals raining onto the ice? The official promotion schedule isn’t out yet, so keep these open.

December 16 – December 27 and January 28 – February 5: These are the Monster’s longest homestands of the season at five games each. The players should be well-rested and will face high-quality opponents. Should make for exciting games!

December 29 – January 15: At eight games, this is the Monsters’ longest road trip. During this trip, they will face opponents in four states.

February 3 – 5, 2022: The only home three-in-three sees the Marlies and Hershey Bears come to town just before the All-Star Break, which is being hosted by the Laval Rocket.

The Monsters, along with most of the North Division are scheduled to play a 76-game season against 14 opponents. How many times will they face each team? Those numbers are below:

Fridays and Saturday’s Alright (For Hockey)

The AHL has always favored a weekend-heavy schedule. This upcoming season will be no different. Fridays and Saturdays will be for the Monsters boys at the Rocket Mortgage Fieldhouse as they will host 23 homes games on those dates. The exact number of games by day is broken down below:

Have Ticket, Will Travel

Now that the schedule has been out, many fans are beyond excited to buy tickets. Though, they aren’t on sale just yet. That is unless you want to take part in the Monsters’ Home Opener Pack which will secure your tickets to the home opener plus an additional game in October or November for $21.

The team also announced that the single-game ticket on-sale date and their promotional and broadcast schedules will be released in the near future.

Following all the moves made in free agency by the Monsters and Blue Jackets, excitement around Ohio Hockey is at a fever pitch. Stick around for a breakdown on all the moves with Monsters implications. Until then, at least we have a schedule to start planning our collective lives from October to April!