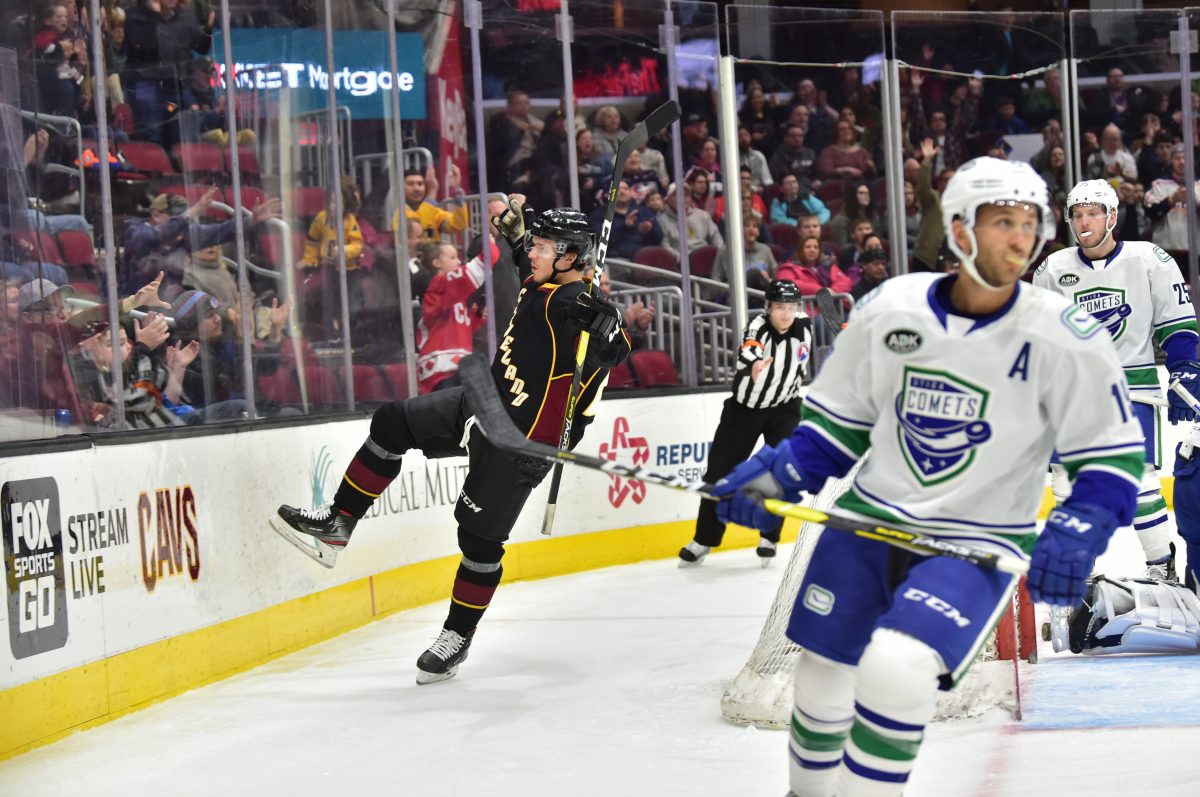 CLEVELAND – Fighting through the bad and trying to hold on to the good. These have been the cornerstones of the Cleveland Monsters’ season to this point.

CLEVELAND – Fighting through the bad and trying to hold on to the good. These have been the cornerstones of the Cleveland Monsters’ season to this point. Friday afternoon’s game against the visiting Utica Comets was no different. Following a 3-0 blowout in favor of the Comets on Friday, Cleveland was on the prowl for redemption.

The Comets would make Cleveland earn every bit of the momentum and offensive zone time in the first. Cleveland’s Trey Fix-Wolansky wound up in the penalty box early, giving Utica a prime power play opportunity. Former Monsters Carter Camper made a sneaky move to Monsters goaltender Brad Thiessen’s right side and fed David Pope, lying in wait outside the crease. With a laser perfect one-time shot, Pope gets his first goal of the year and game.
Despite going down just 3:30 into the game, Cleveland would not go quietly into the afternoon. The cards seemed stacked against them when Sam Vigneault got a slashing call at 5:40. With a high-powered offense like Utica, they knew that giving them too many chances would end in disaster.
However, Calvin Thurkauf took matters into his own hands. Covered by a Comets forward the entire way, Thurkauf finds a lane and blasts a shot over Utica goaltender Zane McIntyre. This short-handed tally would put the Monsters into a tie for fourth in the AHL for shorthanded goals.
The Thurkauf goal was not only a monkey off the back of a team struggling for offensive production and positivity, but it seemed to knock the Monsters into high gear. Momentum would clearly remain theirs for a considerable part of the game.
The 8,752 fans gathered at Rocket Mortgage Fieldhouse were delighted by a swarming Monsters squad and stellar play by the veteran goalie Thiessen. The Comets squad was visibly frustrated, culminating in a costly Francis Perron hooking penalty with just under two minutes left in the first.
The Monsters smelled the blood in the water and struck. Waiting patiently in the left faceoff circle, Stefan Matteau caught the attention of Adam Clendening, who was under pressure. Clendening set up the perfect feed for a rocketing one-timer from Matteau. Cleveland takes the 2-1 lead with at 18:46 of the first.
Cleveland’s momentum was able to survive the intermission and picked right back up in the second period. With just eight seconds remaining on a Lukas Jasek hooking call, Marko Dano posted up on the backdoor. Fix-Wolansky rushed up on McIntyre and was able to tap Dano’s feed home, extending Cleveland’s lead to 3-1.
While they have struggled on the power play, the Monsters went 2-for-2 up to this point in the game. While many may think that they have had a renewed focus on this aspect of the game, that isn’t the case, according to Matteau:

“I don’t think much has changed, honestly. We know we’re doing the right things, but the puck’s just not going in. We’re getting shots; we’re getting a lot of chances, we’re successful in the breakout and on the entry. It’s just the puck hasn’t gone in lately. Today, we got a few.”

Momentum remained square in Cleveland’s grasp for the second. Through physical play by the likes of Brett Gallant and Dillon Simpson and the skill shooting and puck play by Kevin Stenlund, Cleveland had all their bases covered. Utica couldn’t get any traction in their offensive zone. Every time they entered the zone, a Monster was there ready to staple them right up against the boards. 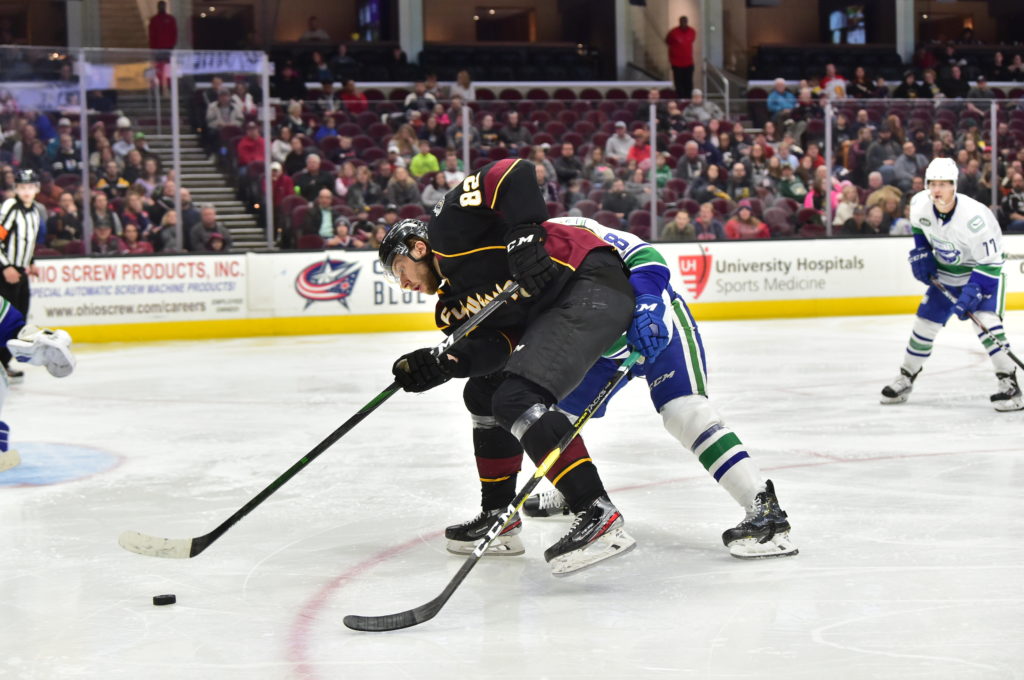 However, the pace the Monsters were holding couldn’t last forever. The Comets picked up on it and made Cleveland pay. After a hard shot by Jalen Chatfield, Thiessen gave up the rebound. Jasek was there in the slot and corralled the puck before slipping it into the net. The score is 3-2, with 3:56 remaining in the second period.
For the third period, the physicality dropped off substantially. While Utica tried to force chippy play to trick Cleveland to take penalties, the Monsters played safe and smart. Even on the kill, they stayed strong and smart, forcing many turnovers and making the Comets chase after the puck.
This relentless and competitive spirit is one that Head Coach Mike Eaves has noticed throughout the season.

“They just have this relentlessness to compete. It’s one of the reasons that these guys are at this level. That’s one of their strengths. They didn’t get here by wishing about it. they work hard. They compete. They do the right things, but the relentlessness of this group is pretty strong.”

Despite last-ditch efforts by Utica, they were unable to get past the shutdown play of the Monsters. Cleveland wins 3-2 and evens out the weekend series against Utica.
Thiessen made 26 saves in the win, while McIntyre saved 24 pucks in the loss.

THREE STARS OF THE GAME

The Monsters return to action on Wednesday when they host the Rochester Americans at 7:00pm CST.
Follow Deana on Twitter for her Cleveland Monsters in-game updates and news coverage! Don’t forget to also follow The Sin Bin on Twitter and Facebook for all additional AHL, ECHL, and SPHL minor league hockey news and notes!