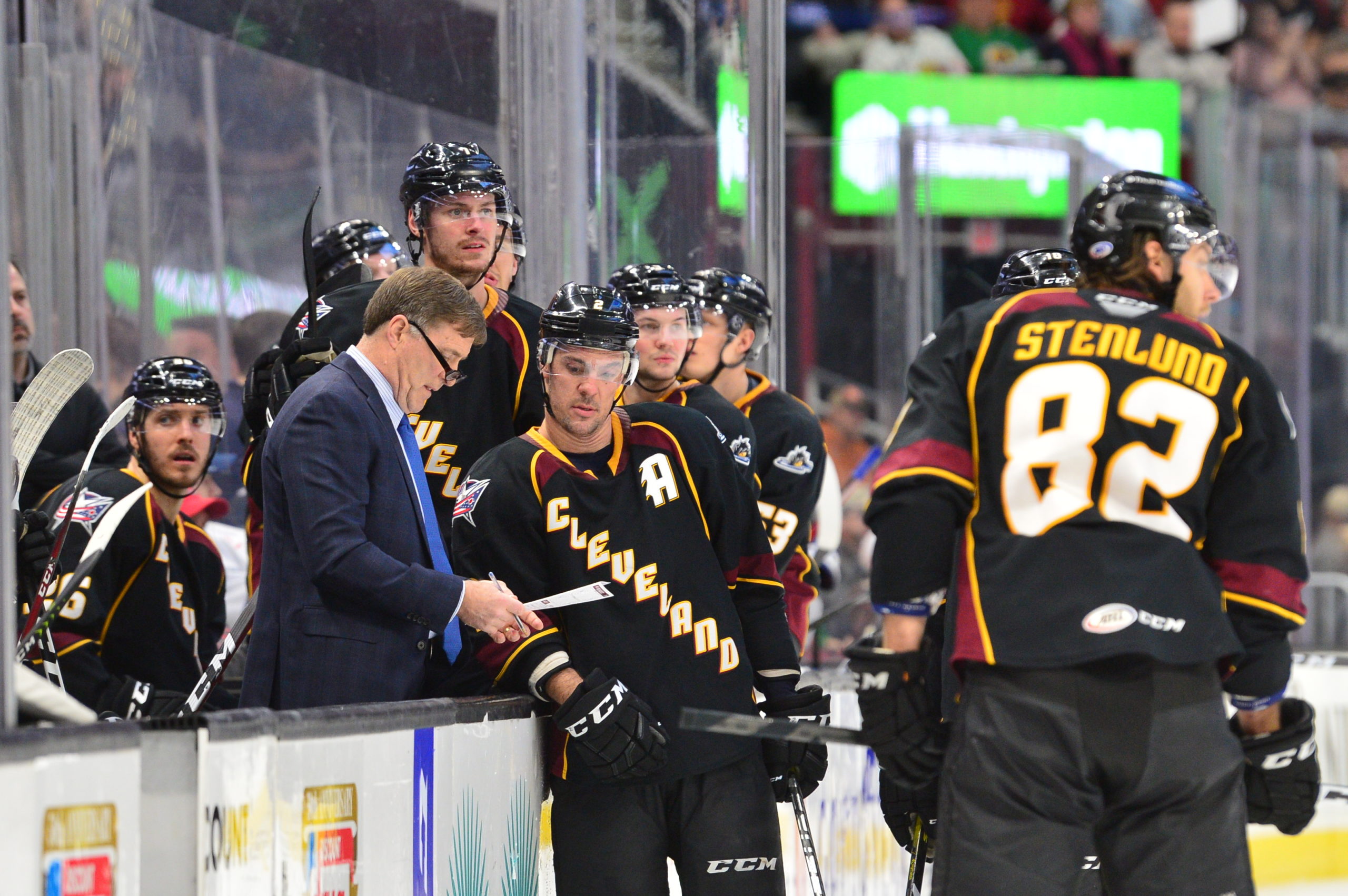 CLEVELAND – The National Hockey League (NHL) free agency window is fast approaching. Like the rest of the American Hockey League (AHL), the Cleveland Monsters are furiously preparing to make moves.

Where does the organization stand? Which players are coming back? Who has already said goodbye? What about the players left in limbo? Are there any new faces?

There are many pieces to go over, so let’s get right to it!

First, let’s look at the players signed to contracts that look to return from last year’s squad.

The list is short, but these players all played vital roles in 2019-20. Gerbe, Matteau, Robinson, Clendening, and Peeke, among others, were even called upon to help out the Columbus Blue Jackets when injuries overwhelmed their parent club.

Having these guys back helps provide a solid core with a nice mix of veteran leadership and youthful energy & drive.

IS IT REALLY GOODBYE?

As with any offseason, fans and teams expect some turnover in the rosters. The Monsters are no exception.

Jakob Lilja (F), a player who spent time between Cleveland and Columbus, led the exodus this season. In late June, Lilja signed a one-year deal with the Kontinental Hockey League’s (KHL) Barys Nul-Sultan. However, Columbus still owns his NHL rights.

Then, on September 15, Anton Karlsson (D) inked a one-year contract in the Swedish Hockey League (SHL) with HV71.

Meanwhile, it isn’t officially goodbye for Marko Dano (F), at least not yet. There are some reports that he has signed or is at least interested in signing with HC Ocelari Trinec of the Czech Extraliga. As of writing this, I have not been able to find any official release of a signing.

The only news I can find regarding a new contract for Dano is an interview on a Czech hockey website dated August 3. Dano reiterates in this article that he has had talks, but the pen has not yet met paper. There is interest there, but the interview makes it sound like his heart remains in playing hockey in North America. This move seems more like a backup plan, loan, or just for training purposes. Further fueling the speculation is that his father, Josef Dano, is a coach within that organization.

Forward Calvin Thurkauf is in a similar boat, signing a deal overseas on August 24. He signed a one-year contract with EV Zug in Switzerland with an NHL out clause. The full expectation is that he will return to North America, assuming a new deal gets finalized.

But, is it really goodbye for the players that signed in European leagues? As we all know, there are so many unknowns in the 2020-21 season for all the North American leagues. So, these signings come as no surprise. It makes absolute sense these players chose to get ice time close to home in leagues that are either already playing or at least training. While these are not official loans, there is still a chance that these players could return to Cleveland once the AHL/NHL training camps get underway.

We need to watch free agency to see if the Blue Jackets and Monsters work to keep this trio’s rights.

The list of free agents on both AHL only and NHL two-way contracts is extensive, especially at this point in the offseason. A hold up on the NHL deals is probably due to the Blue Jackets having three key pieces that they need to get signed, which will come with a hefty price tag. Until they know how those deals will shake out, the depth may have to wait.

A full list of the pending RFAs that have not yet signed elsewhere is below:

Out of this group, I could see Thiessen potentially not getting a new deal. He solidified himself as a fan favorite in his time in Cleveland. However, with a strong goaltender pipeline, his time seems to be coming to an end. The 34-year-old served in a dual goaltender and coach role last season. Thiessen also spent some time working alongside broadcasters at home Monsters games, providing commentary. Perhaps his future lays somewhere in those roles?

This group holds some critical pieces for the Monsters and key depth for the Blue Jackets. Look for a majority of this list to be signed, especially Kivlenieks, Sherwood, and Stenlund. 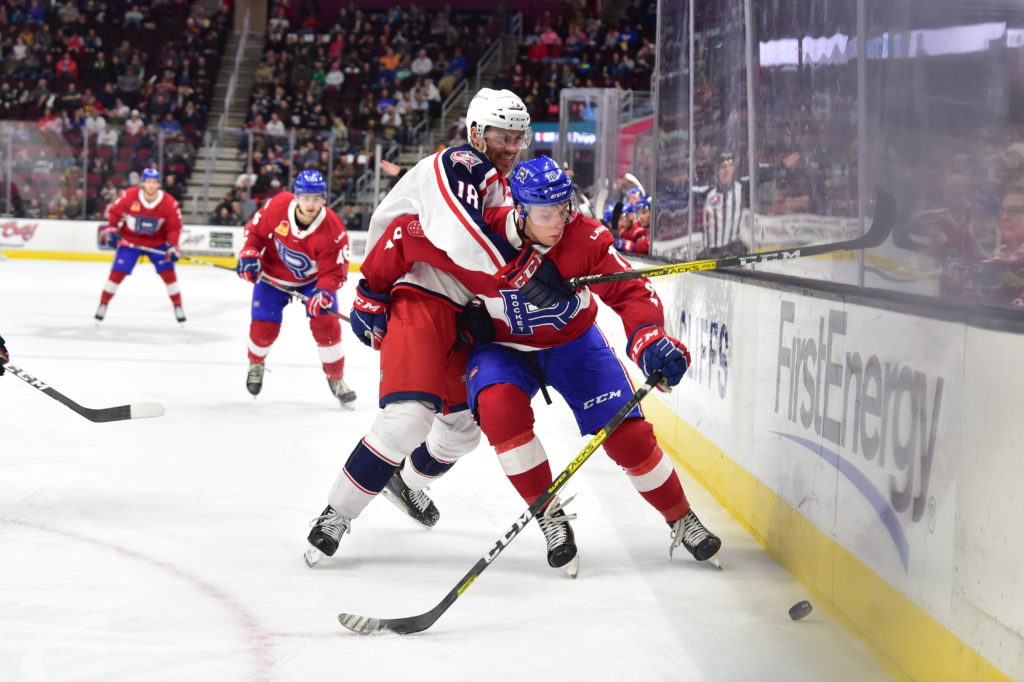 Simpson should be a non-negotiable piece for the Monsters. The former 2011 fourth-round draft pick by the Edmonton Oilers had 23 points in 62 games last season (9-14-23). His game isn’t flashy, but he’s rarely out of position and is highly dependable. In an organization that could see some high turnover, having Simpson back will help provide some stability and security on the blue line.

The Monsters have made some moves and are welcoming four new players to the team.

Wyatt Newpower (D) signed an AHL Standard Player Contract (SPC) with Cleveland on April 6. The 6’3″ right-shooting defenseman comes from UConn of the NCAA, where he was the captain. Newpower set single-season college career highs in several categories: appearances (34), goals (3), assists (19), points (22), and plus/minus rating (plus-23).

The Hugo, MN native is an excellent addition to the Monsters defense, adding an innate ability to set up plays. He isn’t afraid to use the body to block shots, so expect him to get down in front of the opposition’s shooters.

Adam Helewka (F), a 2015 fourth-round draft pick of the San Jose Sharks, comes to Cleveland from Linköping HC (SHL) and Barys Nur-Sultan. Out of the four new Monsters’ AHL signees, Helewka has the most experience. At age 25, he has 189 career AHL appearances with the San Jose Barracuda, Tucson Roadrunners, and Milwaukee Admirals.

Last season, Helewka played 38 games in the SHL and eight games in the KHL. He provides some much-needed scoring and is expected to slot in on either the second or third line.

Matthew Struthers (F) from London, Ontario, Canada is also making his return to the AHL and is the youngest of the four signees. The 20-year-old left-handed shot appeared in five games with the Rocket in the 2018-19 season. Last season, Struthers skated in 62 games with the Ontario Hockey League’s North Bay Battalion and Owen Sound Attack, posting 22-37-59 with 45 penalty minutes.

While he’s expected to start in the bottom six, Struthers can move up the lineup. With his knack for scoring, don’t be surprised to see him potentially centering in a top-six role.

The most recent signing, Zach Jordan (F), is another NCAA alum, coming from his senior season at the University of Nebraska-Omaha. He played all four years of his collegiate career with the Mavericks, skating in at least 34 games in three out of four seasons and scoring over 25 points twice.

Jordan fits nicely into the organization’s mentality of hard work. He’s a gem on the power play and can help bring some experience and talent to a special teams unit that desperately needs it.

Until the 2020-2021 season starts, Jordan will be a player development mentor and coach for Total Package Hockey (TPH) St. Louis.

WHERE DO THEY GO FROM HERE?

There are lots of moves left to be made and holes to plug up. For a team that struggled with lineup inconsistency last season, getting players re-signed should be a priority. While some players have already moved on, the organization should act quickly before losing essential veteran pieces.