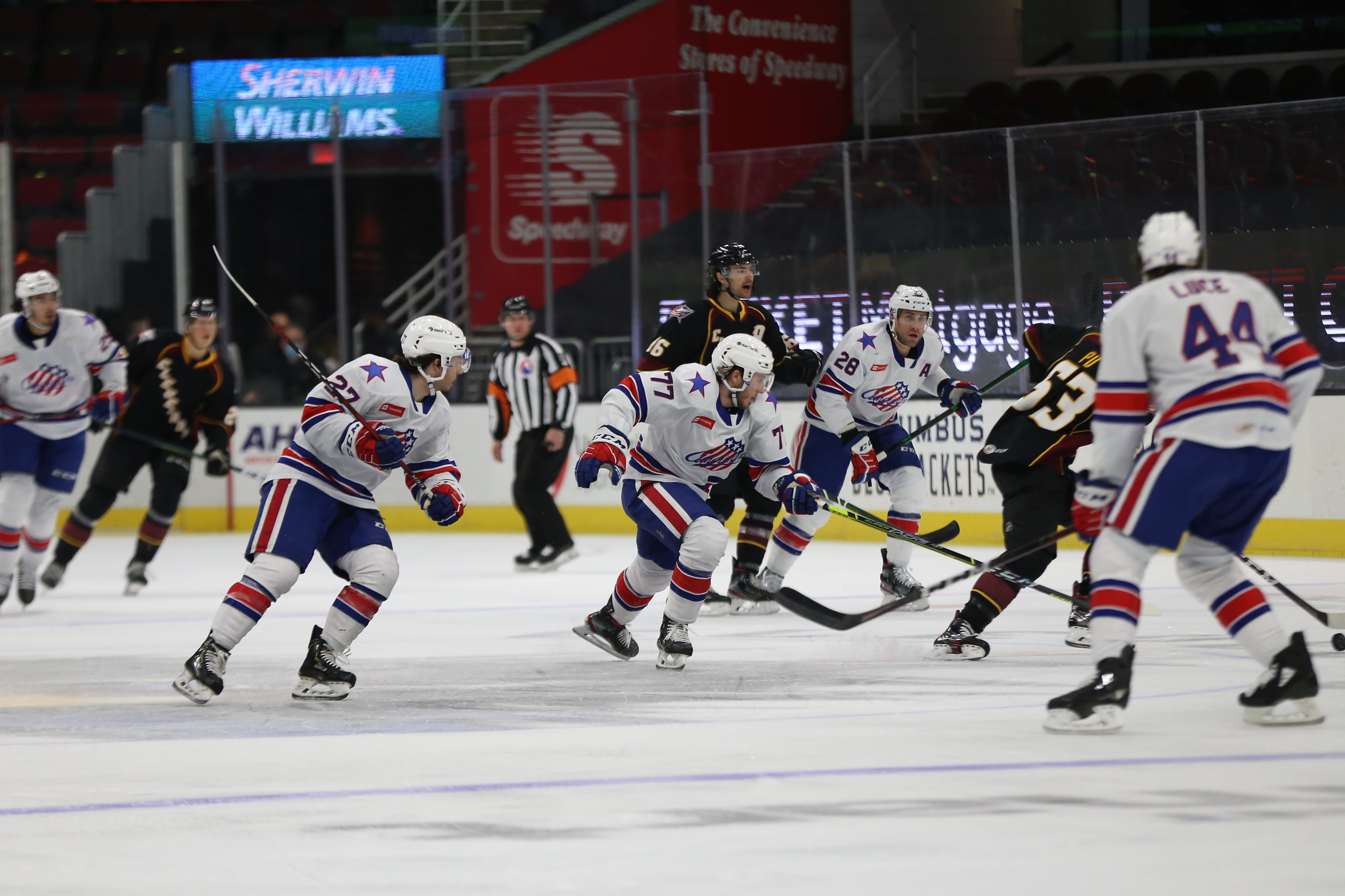 CLEVELAND – One of the major discussions still floating around the hockey world focuses on the old school versus the new school. Which game is more entertaining: the one with physicality and grit or the one with dazzling performances and plenty of speed. Well, those 4,148 fans in attendance at Rocket Mortgage FieldHouse for Saturday afternoon’s matchup between the Rochester Americans and Cleveland Monsters got a game full of both the old and new school.

The Americans took early control of the game, scoring just 26 seconds into the opening period. Cleveland’s Carson Meyer was looking to complete a no-look pass back to defenseman Dillon Simpson. Rochester’s Matej Pekar read the play from the start and intercepted the pass, headed towards the net, and completed a quick backhand pass to Remi Elie. Unfortunately for Cleveland, Elie snapped the puck past Matiss Kivlenieks for an early 1-0 lead.

Just barely 1:30 into the game, the physicality started. Brandon Crawley laid a crushing hit on Rochester’s Dalton Smith behind Cleveland’s net. A few moments later, play shifted into Rochester’s zone, which ended up with Tristan Mullin colliding with Rochester netminder Stefanos Lekkas. The ensuing brouhaha started with Mullin and Griffin Luce and ended with pretty much all the skaters selecting a partner. All in all, only Mullin and Dominic Franco ended up with penalties, both receiving two minutes for roughing.

At 6:34, the Monsters found their equalizer. Simpson had a wide-open shooting lane from the blue line, so he fired the puck on Lekkas. Lekkas attempted to gather it in his glove, but the puck decided on dancing around a bit. Crashing the net were Cleveland’s Luke Moncada and Rochester’s Mattias Samuelsson. The puck ended up bouncing in the goal off Moncada’s midsection for the 1-1 tally. That was Moncada’s first professional goal.

After the game, Moncada described his goal:

“You go to the net, you get rewarded sometimes. Little bit of a greasy one, but it just went in off my midsection and I got rewarded.” – Moncada

For most of the first period, Kivlenieks was Cleveland’s best player, artistically stopping quite a few point-blank shots. Luckily, as the period progressed, Cleveland got back to their game.  Moncada looked to be on his way to another goal, but Oskari Laaksonen was able to deny him that chance with a well-timed hit, knocking Moncada off his path.

Simpson also came in clutch for Cleveland towards the end of the first, using his foot to block a hard shot by Pekar.

Cleveland got the game’s first man advantage, with Alec McCrea going off for slashing at the end of the first. They just managed one shot on net on the two-minute power play. Rochester’s penalty-killing units locked it down and read Cleveland’s strategy perfectly.

Meyer had multiple opportunities in Saturday’s contest, but perhaps no one was closer than the one that came just under five minutes into the second. Thomas Schemitsch had control of the puck and saw Meyer coasting backward, stick raised for a one-timer. Schemitsch deked out Rochester’s Patrick McGrath for a smooth pass to Meyer, who sent the puck flying to Lekkas. I don’t know how, but he managed to slide over to block the shot just in time, with a loud “thunk” echoing in the building to put the exclamation point on that sentence.

Cleveland was swarming. You felt that a second goal had to be coming soon- which it did. 6:35 into the period, Tyler Angle accepted a pass from Wyatt Newpower, found his shooting lane, and expertly lasered it past Lekkas.

Zach Jordan pushed Cleveland to a 3-1 lead at 14:02. Brett Gallant made the initial hit to knock Casey Fitzgerald off the puck. Mullin was coming up along the boards and collected the loose puck for a clean zone entry. Elie and Samuelsson knock the puck free, but Jordan was in the right place and was able to shoot the puck, which was just coasting all alone.

A little over two minutes later, Rochester found their response. Elie notched his second of the game with a long shot through traffic.

That goal started an onslaught on the Cleveland net where, once again, Kivlenieks rose to the occasion.

There was a bit of a sigh of relief to start the third. During the second period, Cleveland forward Evan Polei took a nasty spill into the boards, which required the help of a trainer and teammate to leave the ice. He came out for the third, sitting on the ledge behind Cleveland’s bench. Though I do not think he took a shift, he was at least out there for his teammates. 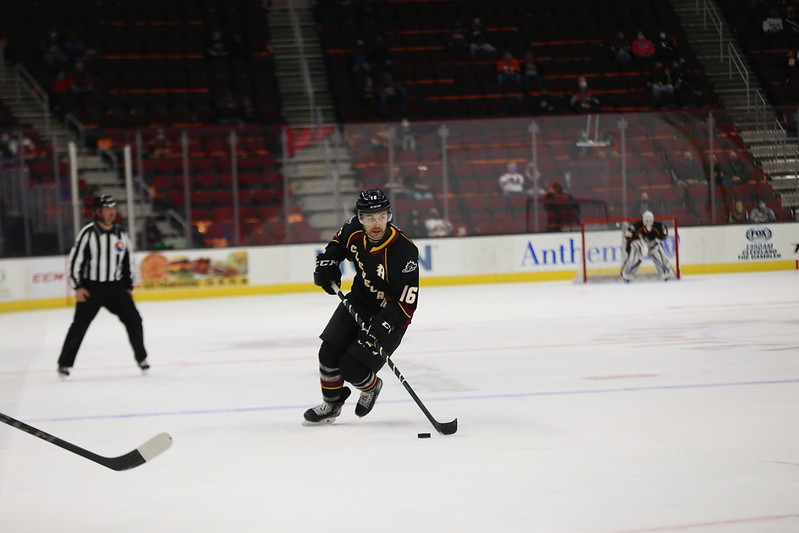 Cleveland got a redo on their power play just 30 seconds in. Tyler Sikura, known for getting into the dirty areas, was down low on the goalie. Meyer gets a one-timer shot off an Adam Helewka pass, which bounces off of Lekkas. Sikura taps it in the net to take the 4-2 lead.

That goal extended Sikura’s goal and point streak to six games. Postgame, he reflected on what this means for him.

“I’ve been fortunate to have some success in this league as an offensive player. I felt that when I got here (Cleveland), they really understood what kind of player I was and what I could bring to the table. I feel like I’ve been put in the right situations. Individually, it is nice to have success and score goals. It’s even better when the team is winning. It’s all good vibes. It’s a nice atmosphere in the locker room now.” – Sikura

A few minutes later, Elie had yet another point-blank shot on Kivlenieks. Luckily, the goalie was able to stretch out his glove just enough to deny Remi the hattrick.

Matiss Kivlenieks. Again! You have to appreciate the effort he's put in tonight.

This was Elie's second awe-inspiring save on Elie in his bid for the hatty.#ROCvsCLE pic.twitter.com/q8gkDXXrIq

Samuelsson cut the Rochester deficit to one with a simple shot past both Newpower and Kivlenieks at 9:06.

Cleveland wasn’t done, however. Schemitsch, Angle, Liam Foudy, and Cliff Pu all teamed up on a play that gave the Monsters a 5-3 lead with just 6:32 remaining.

Thomas Schemitsch got this play started. He wrapped it up with a goal. What a shot from the right point!

Stick taps to Angle and Foudy for getting the puck in the zone and keeping the play alive. Also, Cliff Pu had the screen that made it happen.

Newpower would put the icing on this cake with an empty-net goal with 59 seconds left.

Random Stat of the Game

Saturday’s game is the second straight game where Kivlenieks gave up the game’s first goal on the first shot. Cleveland is 2-0 in those games.

Cleveland returns to action on Tuesday, April 20th, in Grand Rapids against the Griffins. Puck drop is at 7:00 pm.