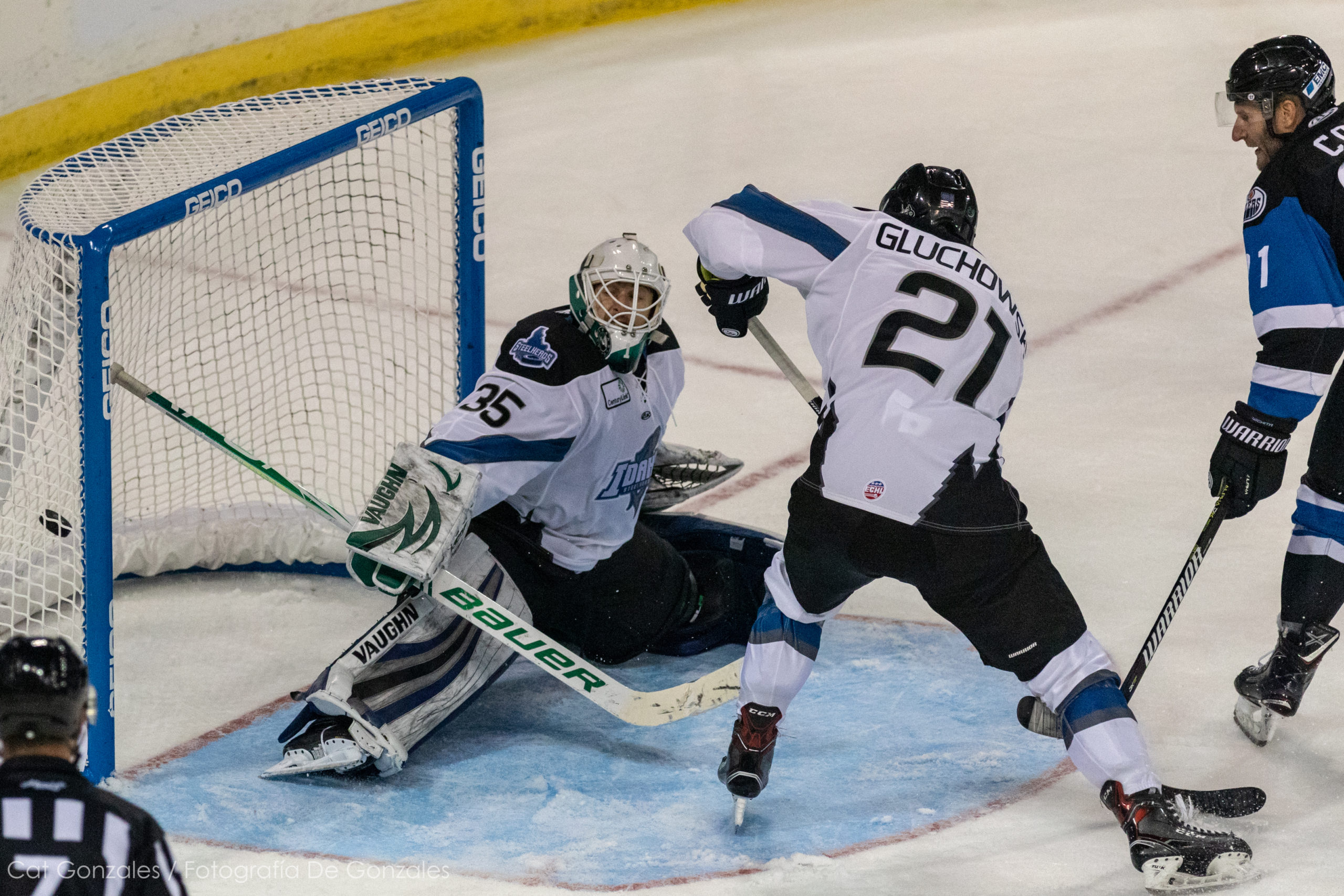 WICHITA – Following two losses to Idaho in Boise, Wichita Thunder Head Coach Bruce Ramsay knew the offense needed a boost.
Wichita announced the signing of 2014-15 ECHL All-Star Jack Combs on Thursday, and his impact was immediate.
The Thunder got things started first as Ostap Safin poked home a loose puck behind Tomas Sholl for his second goal of the year 12:15 into the first frame.
Mitch Gillam closed the remainder of the first period out sharply, stopping all 13 Idaho shots in the opening frame.
Wichita played solid in the first ten minutes of the second period, including killing a penalty. It was just after the 14 minutes mark that Wichita faced it’s toughest penalty kill of the season.
After Riley Weslowski was send off for an apparent trip, the Thunder sent three pucks out of play and lost all five faceoffs of the penalty kill. Despite having no real possession during the kill, the Thunder kept Idaho off the scoreboard.
At 16:51 of the second, Colton Saucerman was sent to the box for holding. Fifty-three seconds later, Kyle Schempp joined him after a high-sticking call, giving Wichita a 1:07 5-on-3 powerplay opportunity.
With one second to spare on Wichita’s two-man advantage, Chris Crane scored on a shot that trickled between Sholl’s legs and into the net. Patrik Parkkonen picked up the primary assist, his third point of the year, while Combs picked up the other, his first point in a Thunder sweater.

“When you get those 5-on-3 opportunities, you have to Capitalize on them,” Ramsay said.

Following the goal, emotions flailed as two separate bouts opened up. Eventually, Steven Iacobellis, Combs, Keegan Kanzig, and Nolan Gluchowski all sat two minutes for roughing, penalties which carried into the third period.
Wichita took a 2-0 lead into the second intermission, despite being outshot 30-18 at the time.
The third period started with another brawl, this time, a full-fledged fight. Nolan Vesey overpowered Saucerman in Wichita’s only scrap thus far this season.
The fight gave Wichita skaters and fans alike the boost they needed to net an insurance goal, scored 3:39 into the third. Crane scored a rocket second goal of the night on a cross-ice feed from Stefan Fournier.
Less than 90 seconds later, Zack Andrusiak gave the Steelheads life after pounding a loose rebound from teammate Marc-Olivier Roy‘s shot.
Gillam and the Thunder played soundly through the next ten minutes before the wheels started to fall off the defensive train.
At 17:41 of the third, Idaho put together another solid push, scoring a second third-period goal off the stick of Andrusiak, this time through the legs of Gillam after he lost sight of the puck.
The Steelheads tied the game at three with 80 seconds left in the contest as Brett Supinski scored his third goal of the season. The goal was reviewed as it appeared the net was knocked off as the shot crossed the line. After a video review, the goal was declared good.

Gillam made the necessary saves in the final seconds to take the game to overtime. Wichita was winless this season in overtime games, but that would change Friday night.
Just 3:43 into the ECHL’s new seven-minute overtime period, Combs scored the game-winner in his first game this season. The goal came off a stellar feed from Parkkonen that set up a one-times for Combs in Sholl’s crease.

“It was great to finally see us get that win in overtime,” Ramsay said. “We were 0-3 [in overtime] prior to that.”

Wichita won 34 of 64 faceoffs on Friday night and outhit the Steelheads 23-17. Idaho outshot the Thunder 55-24, 23 shots in the third period alone.
The Thunder were 1-for-3 on the powerplay and were a perfect 5-for-5 on the penalty kill.
Wichita hits the road for the opening two games of a three-in-three with Kansas City this weekend. Friday and Saturday, the teams will face off in Independence before returning to Wichita for the Sunday finale on Nov. 3.
You can catch the Sin Bin pregame show with Matthew Harding at 6:40 pm on The Sin Bin app on Friday night before Wichita and Kansas City’s first tilt of the season.