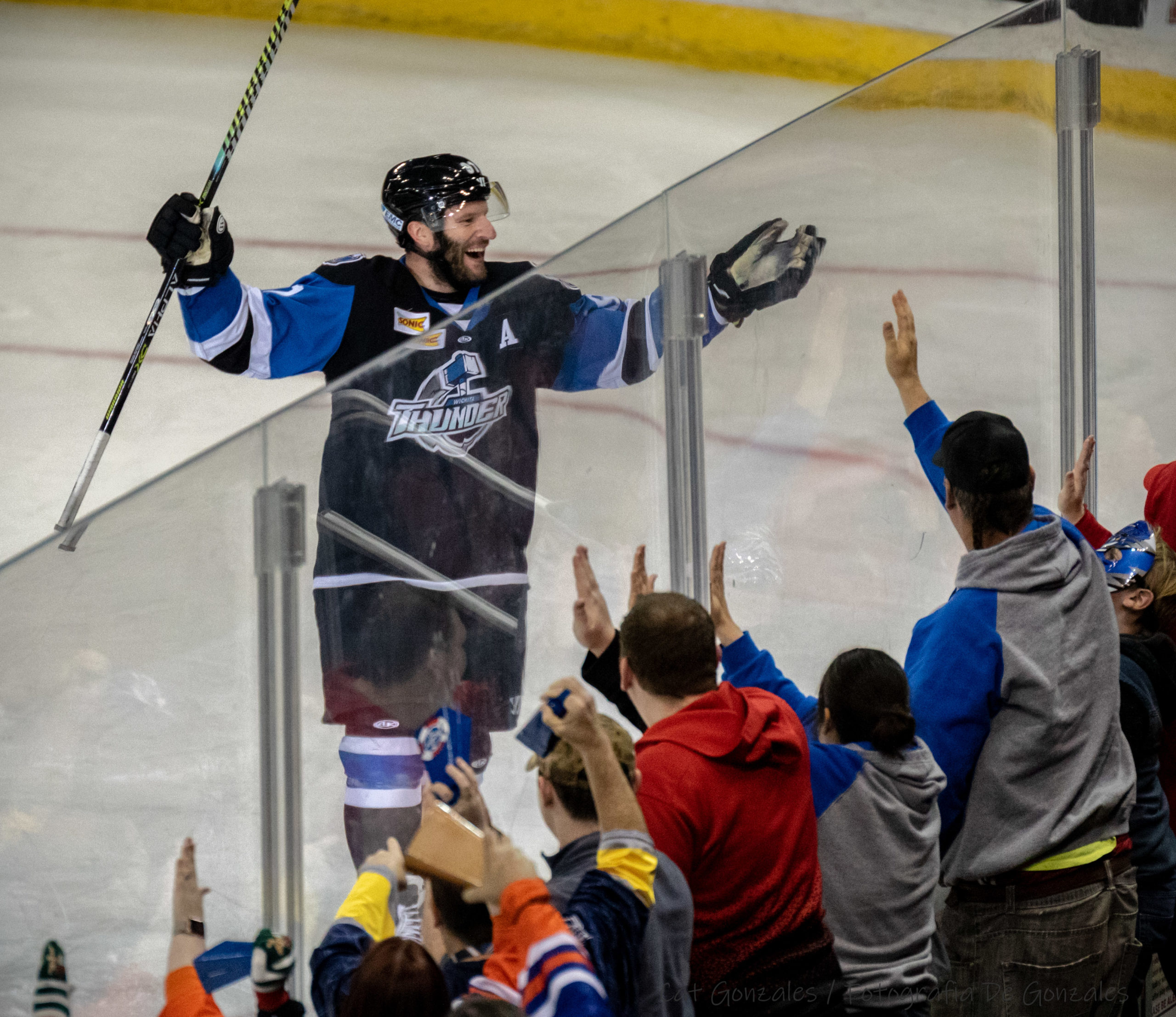 The first place Wichita Thunder; this was the end result if Wichita could find a win at home against one of the most similarly built teams to the Thunder. Wichita defeated Rapid City 4-3 with the help of a two-goal outing for Jack Combs and two-assists from Ostap Safin.

WICHITA, Kan. – The first place Wichita Thunder; this was the end result if Wichita could find a win at home against one of the most similarly built teams to the Thunder.
Wichita defeated Rapid City 4-3 with the help of a two-goal outing for Jack Combs and two assists from Ostap Safin.

“I thought we had really good puck movement tonight on the powerplay,” Head coach Bruce Ramsay said. “We created some dangerous opportunities off the rush.”

The Thunder found nylon first on Wednesday night as Fabrizio Ricci scored on a shorthanded breakaway following a slashing penalty on Jason Salvaggio early in the first. Following the goal, Ricci hurried off the ice, favoring his right arm and did not return to the contest.

The explosive powerplay of Rapid City struck next, making the Thunder pay for the same Salvaggio penalty. With 23 seconds left on the man advantage, Brennan Saulnier scored his sixth goal of the season, a rebound burial, to even the game at 1-1.
The Rush added one more before the period ended as Dexter Dancs buried a puck behind Mitch Gillam following a Wichita turnover to take full control of the end of the first period.

Rapid City carried the 2-1 lead to the intermission, as well as a 16-7 shot advantage. Despite trailing in the other two fields, Wichita out-hit the Rush 13-3 in the first period.
The Thunder entered the second period of play with a much stronger forecheck than before. Even though they struggled to get pucks on net, Wichita kept the puck out of their own zone well.
4:16 into the second period, Combs scored his first goal of the night on a breakaway caused by a stellar pass from Gillam to tie the game at 2-2.

The score remained deadlocked for the remainder of the second period, as Gillam stopped the eight Rush shots he faced. Wichita’s offensive struggles continued though, only recording six shots in the second.
Rapid City wasted no time claiming the lead in the third, as they took the opening faceoff directly into the offensive zone, onto Tyler Poulsen‘s stick and past Gillam.
Wichita regrouped well and went forward to play one of their best periods of the season. The Thunder answered the early Rush goal at 2:51 of the third on a great snipe over Ivan Prosvetov‘s shoulder by Cameron Hebig.

The Thunder rallied the remainder of the third, putting solid opportunities on net, despite allowing some on the other side. Rapid City defensemen paid the price in the third, as the Rush blocked six shots in the third period alone.
With 2:04 remaining in the game, Eric Israel took a penalty for tripping, giving the Thunder a late powerplay chance.
With just 13 seconds remaining in the game, Safin fired a saucer pass cross-ice to Combs, who scored the go-ahead goal, his second goal of the game.

The Thunder held the Rush for the last few seconds to win 4-3 and move into first place in the league.

“We played a good team tonight,” Ramsay Said. “They’ve been winning hockey games and they came and competed.”

Wichita finished 1-for-6 on the powerplay, the lone tally the game-winning goal while the penalty kill unit killed 4-of-5 Rapid City powerplays.
Rapid City outshot the Thunder 37-31 and won 36 of the 66 faceoffs Wednesday night. The Thunder out-hit the Rush 29-16 while Rapid City blocked two more shots than Wichita (12-10).
The Thunder look to end the short homestand on a positive note as they host the Idaho Steelheads on Friday night at INTRUST Bank Arena.
Follow Matthew Will and Matthew Harding on Twitter during Wichita Thunder home games, plus all Thunder games live on The Sin Bin’s Mixlr page.

Please consider becoming a Patron as a way to say thanks and support us for what we do! https://www.patreon.com/thesinbinhockey