Comets Undefeated in October with Win Over Devils

UTICA, N.Y. – After a gutsy shootout win over the Hershey Bears, the Utica Comets return home for the third of an eight-game season series against the Binghamton Devils.
The big positive out of last Saturday’s matchup against the Bears was the stalwart goaltending of rookie netminder, Michael Di Pietro. Di Pietro’s 38 save performance gave the Comets an unprecedented seventh straight victory to start the season. Di Pietro’s stellar numbers also vaulted him into the top ten of AHL goaltending for both save percentage and goals-against-average.
The big negative out of last Saturday’s matchup came from the concerning number of lapses in defensive coverage from both the forward and defensive units throughout the game. On the one hand, the Comets were coming into the Bears’ matchup off a five-hour midnight bus-ride to Hershey from Utica, meaning exhaustion from a lack of sleep could have played a significant factor in the teams’ lackadaisical defensive play. On the other hand, regardless of the state of exhaustion, a professional hockey team shouldn’t put their rookie goaltender through the meatgrinder by having him face 39 unblocked shots attempts.
It may have been foolhardy to give the rookie netminder the second game of a back-to-back, knowing full-well the team ahead of him would be completely exhausted from a late-night bus-ride into town. The team gutted out the victory, due entirely to Di Pietro’s performance, but this writer has to imagine that some changes are in store regarding goalie starts in future back-to-back games.
The Comets face off against a struggling Binghamton Devils team to try and close out the first month of the season, undefeated. The Devils most recently defeated the previously unbeaten Toronto Marlies, 3-2 in overtime at home.
The Comets have so far won two of three matches against the Devils by a combined score of nine-to-four. The Devils rank second-to-last in the North Division in goals-for, and penalty killing percentage, with the second-worst goals-against. The Comets rank first in the same division in goals-for and second in penalty killing percentage, with the league-leading, fewest-goals allowed.

SINCE WE LAST MET

Defensemen, Ashton Sautner, was recalled to the Canucks. Replacing him in his stead is defenseman Oscar Fantenberg, who joins the Comets on a conditioning stint after being out with multiple injuries/illnesses since the start of the season.
Joining him on the Canucks recall was centerman, Adam Gaudette. Gaudette picked up one goal in his two-game stint over the weekend with Utica. Gaudette returns as an extra body for the Canucks while forward Tyler Motte recovers from a foot injury. Motte was in a walking-boot after blocking a shot in a 6-5 shootout loss to the Washington Capitals.
After being sent down to the Kalamazoo Wings for some playing time, Mitch Eliot returns to the Comets lineup, presumably for some practice time with the AHL club. This season, Eliot has picked up zero points, with nine shots-on-goal, in three games played for the Wings.

On top of the call-ups, illness struck Zack MacEwen before Wednesday’s matchup against the Devils, meaning the Comets would be without one of their leading offensive contributors. The absence of MacEwen meant a substantial shakeup to the teams bottom nine.
Forwards:

The Comets win against the Devils was a relatively unspectacular one.
What was spectacular, however, was the slobber-knocker between Brandon Baddock and Dyson Stevenson merely two minutes and thirty-seven seconds into the game. The fight began seemingly out of nowhere, after a rather routine tip-in attempt from Vincent Arseneau and the fourth line.
The remainder of the first period was a relatively dull affair, punctuated by a Comets penalty kill. The period closed with just 14 shots on goal between both teams. 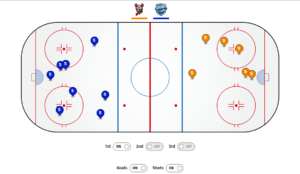 The second period was more like the Comets that fans have grown accustomed to this season. Through the first six minutes of play in the second period, the Comets poured the pressure on, as they outshot the Devils six-to-one.
The relentless pressure eventually paid off with a goal from Francis Perron. The play began with a beautiful rink-wide feed from defenseman Olli Juolevi beyond the Comets blue line. The pass landed directly on the tape of Sven Baertschi’s stick, giving he and Francis Perron a two-on-one rush against the Devils. Baertschi wristed a shot off of Devils tendy, Evan Cormier’s right pad, and the rebound came out to a crashing Perron, who buried the rebound with a quick wrister under Cormier’s pads, giving the Comets the one-nil lead.


The Comets saw a marked improvement to the defensive side of their game, relative to their performance last Saturday against the Bears. With the remainder of the second seeing the Devils failing to establish an effective cycle in the Comets end. Despite outshooting the Devils ten-to-seven, it felt like the Comets were underachieving in their ability to muster offense.
Despite being paired alongside the dynamic duo of Perron and Baertschi, it had been an otherwise quiet night for Kole Lind. While Perron and Baertschi showed flashes of brilliance in forcing turnovers and generating shots in the Devils end, the native of Shaunovan, Saskatchewan struggled to keep up with the two’s pace of play and was mostly invisible for the first two periods of play.
That changed in the third period, however, when Lind made himself visible in a major way.  He scored the Comets’ second goal of the game. The goal came after Comets defenseman Brogan Rafferty stepped up along the left-wing to help out Lind in a board battle. After retrieving the puck along the wing, Rafferty played the puck back to the blueline where Perron was waiting. He returned the pass to the now open Rafferty, who then saucered a beauty of a pass to Lind for an easy tap-in goal.


Lind, unfortunately, had a rough moment following his third goal of the year. Just four minutes later, Lind was responsible for a Devils goal against, after a rather innocuous zone-entry from Ben Street, Lind was skating through center alongside Devils forward Brett Seney on the backcheck when Street handed off to Seney. After the pass to Seney, however, Lind stood idly by as Seney was allowed an easy wrister over the left pad of McIntyre — Cutting the Comets lead by one.


After the Seney goal, the Devils began to pour on the offense. Through the final 13 minutes of play, the Devils outshot the Comets nine-to-four.
The Comets found themselves on their third penalty kill of the night after the Comets’ Captain, Carter Bancks, got sent to the box for slashing. This third and final penalty kill of the night is where defenseman, Olli Juolevi, truly shined. Juolevi was all over the Devils with his body, blocking several shots, playing hard and physical along the boards, and finally, by setting up Boucher for a breakaway pass all in a single shift.
A lot of concern coming into the season was whether Juolevi, physically, would be ready to compete in the AHL given his knee surgery. Tonight, his skating looked its best as he played the most physical game that this writer has seen from him. A lot of the credit to Juolevi’s game has to go to the stable play from Oscar Fantenberg, who was making his regular-season debut tonight and looked solid paired alongside Juolevi through much of the 60-minute affair. However, after Fantenberg began to slow-down as the game progressed, Juolevi stepped up in a big way as he contributed in all areas of the game tonight for the Comets.
Much of that “slowing-down” likely comes from Fantenberg having not played since the Canucks pre-season, where he first got injured.
In the waning minutes of the third period, the Comets were on the receiving end of another goalie blunder behind the net. This time, Cormier sent a no-look pass from behind his net, right onto the tape of Boucher’s stick. Boucher then buried his league-leading tenth goal of the season.
The Devils pulled their goalie in an attempt to try and cut the Comets lead, but it was too little, too late. As the Comets closed out the game with a 3-1 victory, and a franchise first, eight-game win-streak to start the season. Tonight’s effort was a good one for the Comets as it didn’t rely solely on one player. The efforts of Arseneau and the fourth line kept the Comet’s afloat through the first period. While the spectacular offense from Perron/Baertschi/Lind helped close out an otherwise tight affair.

The Comets return to action Friday night when they face off against the Providence Bruins for their first of two inter-conference battles this season. Friday’s matchup against the Bruins will be the beginning of a Comets two-game back-to-back homestand. Puck drop is at 7:05 pm EDT/4:05 pm PT.