ALLEN, Texas – I had the urge to write this morning even though there isn’t much news to write about. Not sure where this will end up so it may be more rambling than usual.

ALLEN, Texas – I had the urge to write this morning even though there isn’t much news to write about. Not sure where this will end up so it may be more rambling than usual.
– I am positive no matter your situation this coronavirus pandemic has upended your life in so many ways. Being in the 70+ category (expendable category by some) you live in fear of catching the virus and keep thinking it is a death sentence even though the stats say otherwise. To make the worry quotient even higher our only son and his wife live in Manhattan and our only daughter is a registered nurse (RN) at Parkland Hospital. I know each of you has equally stressful stories. I have to admit the memes from moms about homeschooling provided much comic relief during the last few days. My only advice is to stay safe!
Other than solo bike rides around our neighborhood (made 10 miles yesterday) and one trip to Cheddar’s for curbside pick up we have stayed close to home. We made our first online grocery order which I will pick up tomorrow. I may be overreacting but the last few days have taken me back to Vietnam where you have the feeling danger lurks around every corner. When you read how long the virus can stay alive on various surfaces it is easy to get paranoid. Here is a video I found made by a doctor that talks about how to handle various packages. If you are a 20 something you may scoff and say this goes too far but as a 70 something I will be heeding this advice when I pick up groceries tomorrow. This is worth watching!


– Enough about the other stuff. Here are some hockey topics to get your mind (and mine) off coronavirus.
– Next week could be a big one for the Allen Americans as the ECHL will announce individual award winners. I know this won’t happen but you can make an unbiased argument that Allen could win Rookie of the Year, Defenseman of the Year, MVP and Coach of the Year.
Rookie of the Year – I would be shocked if Tyler Sheehy doesn’t win ROY. Tyler finished with a 15 point lead in the rookie scoring race with 70 points. His 44 assists were 12 more than any other rookie. His 26 goals were #2 for rookies, one behind the leader. He accomplished all of this playing in only 47 games.
Defenseman of the Year – Alex Breton won the scoring race among defensemen by nine points and his 44 assists were tied with Tyler Sheehy for the most in the entire league. There were no weaknesses in his game and his stats stack up against any other defenseman in the league. Alex will definitely finish in the top three but maybe hurt because some voters don’t like to vote for multiple players from the same team and Sheehy is so strong. Alex is certainly deserving.
#1 – points (55)
#1 – assists (44)
#2 – points per game (.90)
#5 – games played (61)
#6 – goals (11)
#11 – plus/minus (+20)
Coach of the Year –  The job Steve Martinson did this season was outstanding and should make him one of the favorites for ECHL COY. Allen was on pace to finish the regular season with 102 points after totaling just 56 points last season. A 46 point turnaround would have been one of the biggest in ECHL history. It is hard to believe with 10 championships and more wins (1043) than any pro coach in North American hockey history other than Scotty Bowman that Martinson has never been selected Coach of the Year. Martinson had one of his best ever coaching jobs from recruiting a different type of team to handling so many of his players spending a majority of the season in the AHL. Martinson lost close to 300 games from the players he signed spending time with AHL teams in this shortened season. I think Martinson’s main competition will come from first-year South Carolina Stingrays head coach, Steve Bergin, who has had his team in first place the entire season. Allen and Martinson have never been the most popular around the league for various reasons so my guess is Coach of the Year will go elsewhere, most likely to Bergin.
MVP – This would be a long shot because voters will be reluctant to vote for Tyler Sheehy as Rookie of the Year and also MVP. Tyler missed out on the scoring championship by three points when he missed the last two weeks of February with an injury. Sheehy ended up playing in just 47 games this season because of injuries and call ups which makes his stats all the more impressive. Tyler is certainly deserving and should finish in the top five. Here are his stats to put the year in perspective:
#231 – games played (47)
#1 – assists (44)
#1 – points per game (1.49)
#3 – points (70)
#7 – goals (26)
By the way, Sheehy took just two minor penalties in 47 games (goalie interference and slashing).
– I had a chance to check in with coach Martinson and he is busy getting ready for next season. The way the season ended there are plenty of details getting everything organized and ready for next season. Martinson is already identifying players to recruit and will start making calls soon. I know from past seasons he usually doesn’t talk to Allen players for a few weeks after the season is over. He will start having those conversations in the near future. You have to wonder what impact the Coronavirus pandemic will have on players signing in Europe. There are a lot of players with Allen ties that had AHL deals for this season. Will they get AHL deals for next season?
– Allen Event Center Zamboni driver extraordinaire, Geoff Gill, sent me this article from the Toronto Sun about the history of the Zamboni. It is a great read. https://torontosun.com/sports/hockey/sweet-ride-theyre-clunky-and-slow-but-the-fascination-with-the-zamboni-lives-on
– If you are a jersey collector the Americans have another auction currently going on (ends on Tuesday) that includes among others, more Allen Americans military jerseys and game-worn red jerseys. If you are not familiar with the auction you have to download the app (LiveSource) and select “Allen, TX” to bid. A chance to own an autographed jersey for as little as $250. I saw jerseys for Pollock, Sheehy, Heffley, Falkovsky, Breton, Lammon and Paterson. 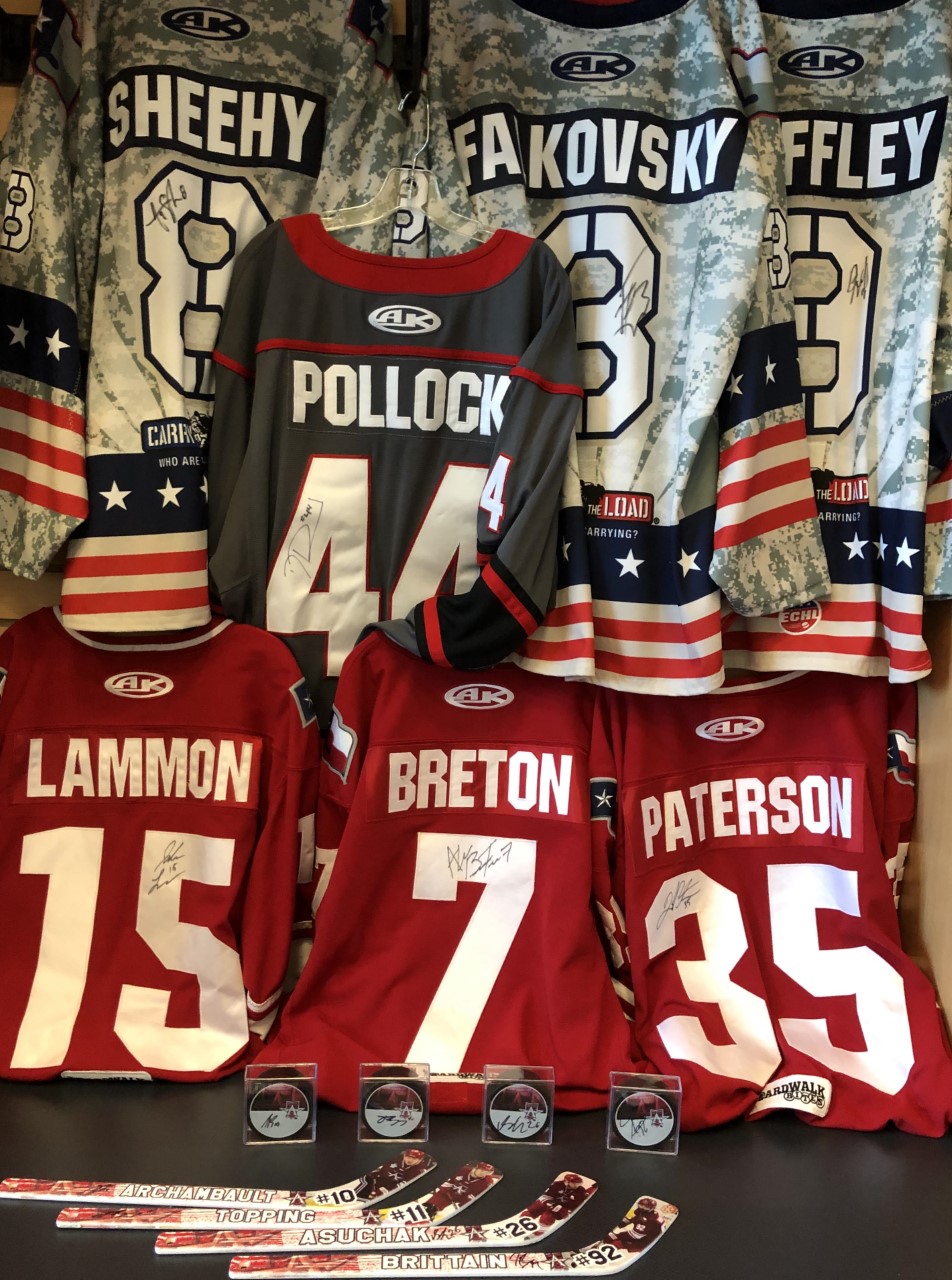