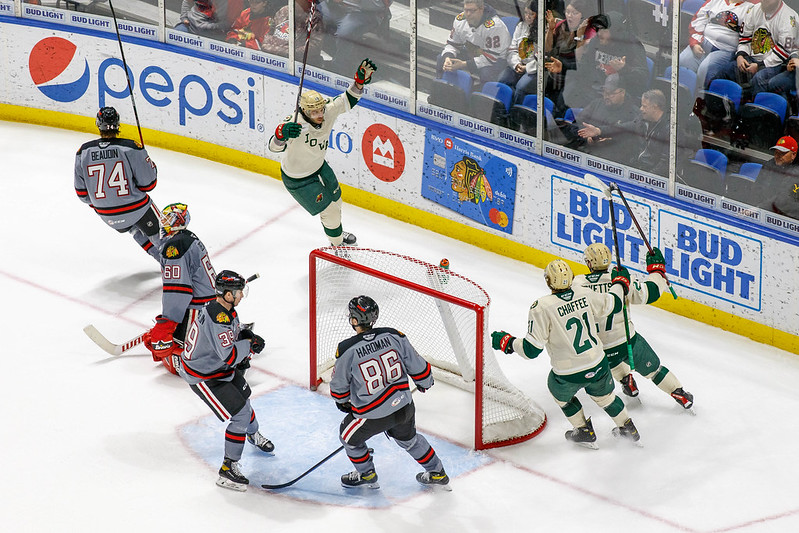 Joseph Cramarossa finished off the IceHogs in overtime Wednesday, leading Iowa to a 2-1 victory. (Photo by Todd Reicher/Rockford IceHogs)

ROCKFORD, Ill. – The Rockford IceHogs and Iowa Wild found themselves in a defensive struggle Wednesday night at the BMO Harris Bank Center. On an evening where goals were scarce, a former IceHogs player broke a 1-1 stalemate in overtime.

Joseph Cramarossa potted the game-winner in the extra session, giving the Wild a 2-1 victory over his former team. This is Rockford’s (15-14-2-1) fourth loss to Iowa in five meetings this season. Meanwhile, Iowa improves to 16-16-2-2 for the season and breaks a two-game losing streak.

The Wild took an early 1-0 lead 8:52 into the game on Marco Rossi‘s tenth goal of the season. The play was a one-timer from the high slot set up by Kyle Rau that got over Delia’s blocker.

It was a penalty-filled evening on both sides. Behind goalie Collin Delia‘s 25-save performance, the Hogs negated all five Iowa power plays. Delia kept Iowa out of the net for the remainder of regulation, allowing the IceHogs to get the equalizer late in the second stanza.

Mike Hardman got a hold of a pass from Lukas Reichel in nearly the same spot as Rossi’s goal had materialized. Hardman had time to settle the puck before flinging it past Iowa goalie Zane McIntyre 13:39 into the second.

Despite the tally, Rockford was one for six for the night on the power play. The Hogs failed to capitalize on several lengthy opportunities, including two four-minute chances in the second and third periods.

The IceHogs killed three penalties in the final frame, including a tripping penalty on Carson Gicewicz near the end of regulation, resulting in 90 seconds of a 4-on-3 advantage for Iowa to begin overtime. Rockford was able to get back to equal footing, but Cramarossa, who played in Rockford back in 2019-20, took a pass from Joe Hicketts on a delayed penalty and made a beeline for the front of the IceHogs net.

Maneuvering past Dylan McLaughlin, Cramarossa worked his way to the inside of the left circle. He five-holed Delia to end the contest 2:32 into overtime.

McIntyre stopped 20 Rockford shots to pick up his fifth victory of the season. Cramarossa was named the game’s First Star, followed by Hardman and Rossi.

The Wild return to Des Moines to host San Diego in a weekend set Friday and Saturday. Rockford ends a six-game homestand with a 2-3-1 mark and travels to Milwaukee Friday night.