CINCINNATI, Ohio – For the second time in the 2022 Kelly Cup Playoff Central Division Semifinals, the Cincinnati Cyclones and Toledo Walleye needed overtime to find a victor. However, the Cyclones came out on top this time by a score of 6-5 after a controversial goal 9:40 into extra time. The win also gave the fourth-seeded Cincinnati a 2-1 series lead over Brabham Cup-winning Toledo.

Before the game, Cyclones head coach Jason Payne had one clear message for his team:

No one took that to heart more than goaltender Michael Houser. Despite the high-scoring final of this game, it was truly Houser protecting the crease that helped keep his team in the game and avoided a massive blowout by the visiting Walleye.

Not surprisingly, there was some pushing and shoving early on in this Battle of Ohio, with Sean Allen and Mitchell Heard the first two to oblige, just 30 seconds into the game.

Cincinnati had the pressure and advantage early. First, Matthew Cairns put up the first shot of the night, a seeing-eye puck that had both Zack Andrusiak and Jesse Schultz getting sticks towards the puck as it made its way towards the goal. However, Walleye goaltender Billy Christopoulos managed to make the save.

Shortly after, Cincinnati would take the lead with Luc Brown completing a feed to Graeme Brown, who sent the puck trickling past Christopoulos’ five-hole and into the net. There’s rarely a better time to tally your first professional goal than in the playoffs at home. 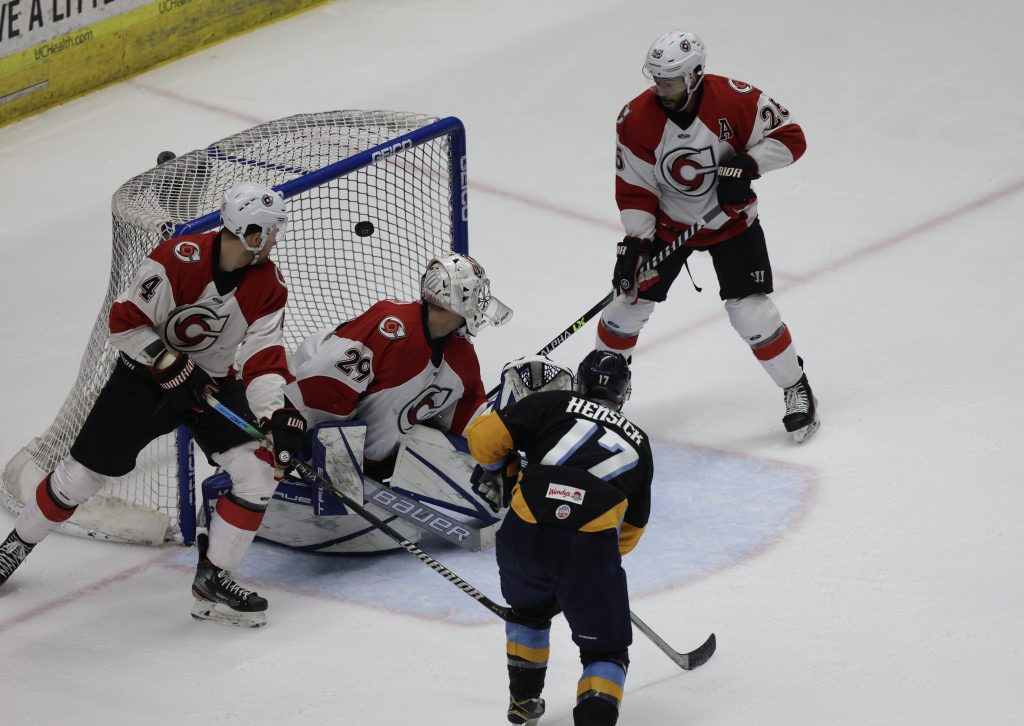 Where Cincinnati struggled was on special teams. On their first man advantage of the night, they gave up a high danger shorthanded breakaway to John Albert, who had a hat trick back in game one. Luckily, Cyclones netminder Houser was able to swallow that puck and not give up the rebound. At that point, Cincinnati stood at 0-for-10 in the series with the extra skater.

For the first half of the period, there was mainly a pretty easy flow to this one. Both teams were feeling each other out, almost looking to conserve energy for the marathon before them. The rushes were quickly stifled, regardless of which team tried to break out.

Then, Cincinnati found themselves down a man off an Andrusiak interference call. That set up the tieing goal for the Walleye, where captain TJ Hensick sent in the initial shot while Matt Berry completed the tip-in for the score.

That set off a Toledo rally, where they seemed to be breaking out on all cylinders. First was a stretch of faceoff wins. Then, deja vu. Remember how in game two, I said that the Cyclones needed to win faceoffs in their zone because Toledo has a knack for scoring off them? Well, it happened again.

This time, Heard won the faceoff and blindly dropped the puck back. In what can only be described as fantastic communication, multiple players went for the puck, but Cam Clarke raced in for a powerful slapshot for the 2-1 lead just 12:22 into the game.

Toledo has been deadly off the faceoff this series. Tonight is no exception.

Mitchell Heard won the faceoff and dropped the puck back. Cam Clarke came streaking in for the slapshot.

This only encouraged Toledo as they continued to swarm the net. But, Cincinnati stayed in the game, led by captain Justin Vaive. He drew penalties, had some high-quality scoring chances, and essentially rallied the troops to send this to intermission down only 2-1.

Toledo started the period with heavy pressure, including a few odd-man rushes. Again, it was Houser protecting the blue to keep his team alive.

Then, he found reinforcement in the form of  Andrusiak’s second goal of the playoffs to tie the score back up at two.

Though not on the scoresheet for this goal, Dominic Franco pretty much did all of the orchestrating. But, it was Andrusiak who crashed the net to send home a rebound.

For the second time on Monday night, Toledo would regain the lead. The latest was a power-play tally Berry was getting off a quick shot from almost point-blank range.

From there, the game started to heat up. We saw a fair share of 4-on-4 hockey and plenty of gatherings after whistles. That chaos spilled into the play, too, with plenty of pushing, shoving, and crowding, making the officials’ job quite tricky.

Then, at 18:41, Franco was finally rewarded for his outstanding play this evening.

Dominic Franco finally rewarded here. He had the puck down low in the Toledo zone and Toledo's Ryan Lowney raced in with the tackle. Somehow, the puck found its way past Christopoulos.

That sent this game into the third, all tied at three. But, the excitement was far from over.

Needless to say, there was tension in the air to start the third period. Both teams seemingly were scared to make a mistake and give up the next goal.

But it wasn’t long for the action to start popping off.

Cincinnati’s Lincoln Griffin found himself on the receiving end of a high and hard hit along the boards from Jesse Mychan. Griffin fell to the ice, and his helmet flew off. Mychan was given a five-minute major penalty and game misconduct for charging.

It wasn’t the best hockey on this man advantage for the Cyclones, especially since there was another prime short-handed breakaway from Houser, which sent him down to the ice. But, no harm, no foul, and play continued. Then, a dagger by Toledo. While still on the 5-minute penalty kill, Toledo’s Brett Boeing managed to gain possession and skate in on Houser, slipping the puck past him to regain the lead at 4-3.

But Cincinnati would not be denied entirely on this lengthy power play, with a booming shot from Dajon Mingo tieing this one back up, yet again.

It took until the final 0:14 seconds of a 5-minute power play, but the Cyclones managed to tie this game back up.

Dajon Mingo managed to set off a rocket from the blue line.

Hensick, who has been a thorn in Cincinnati’s side the entire series, regained the Walleye lead with only 7:15 remaining in regulation.

Notice how there have only been one-goal leads? Well, that’s been a trend the entire series as no team has yet managed to find a two-goal yet thus far.

With the game in the waning minutes, Cincinnati was looking for a hero to get them back into this and hopefully send this one into overtime. Luckily, Lukas Craggs was there to answer the call with a breakaway. The shot? Well, it wasn’t pretty, but all that matters for this squad is that it crossed the line for the equalizer.

They don't ask how. They only ask if it crossed the line.

Somehow, someway, the puck managed to sneak under Christopoulos and into the net.

Amazing pass by Wyatt Ege and breakaway by Lukas Craggs, even though the shot was less than stellar.

For the Walleye, that was the fourth time last night they led the lead slip away. They were mad, frustrated, and looking for answers. Would they find one in OT, or would the upstart Cyclones find a way to win on home ice in front of 2,263 fans?

If you were looking for fireworks to start OT, this game wasn’t it. Frequent whistles killed off any chance of momentum. Though, Toledo was able to sustain possession for a large portion of the opening minutes. The Cyclones were limited to dumping the puck back into their own end to get fresh legs on the ice.

Then, Cincinnati found its opening. While battling for a puck, Vaive was taken down along the boards by Cole Fraser, with Vaive appearing to hit the back of his head on the ice. As a result, Fraser was given a match penalty for slew footing. For the second time tonight, the Cyclones found themselves on a five-minute power play.

Toledo, as expected, was very aggressive on the kill in the opening minute. On the flip side, the Cyclones were deliberate on their play, not taking too many chances but also not giving Toledo the chance to jump on a miscue. Power plays seem to go by fast, but this one felt especially long as the crowd grew frustrated with the lack of intensity.

That was the question of the night. There was no denying that the puck off Patrick Polino‘s stick crossed the line, but there was a huge question of the net, which was sitting cattycorner off a mooring. The official behind the net emphatically signaled no goal, with the Cyclones stunned at the call. 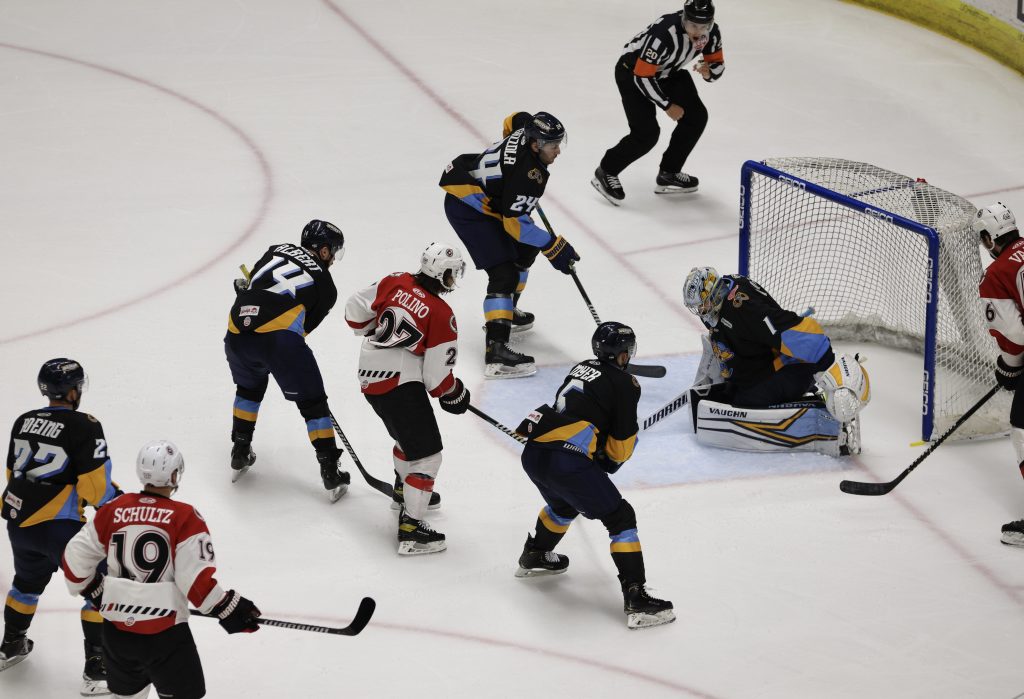 After a lengthy review, the original call was overturned and was awarded to Cincinnati.

After further review, the officials have overturned the no-goal call and ruled this to be a good goal.

Cincinnati erases 4 deficits to take a 2-1 series edge over the Toledo Walleye. They win 6-5 in OT.

The building erupted as the underdog Cyclones took a 2-1 series lead.

Both teams get a day off before back-to-back games this Wednesday and Thursday in Cincinnati. Both start at 7:35 pm.