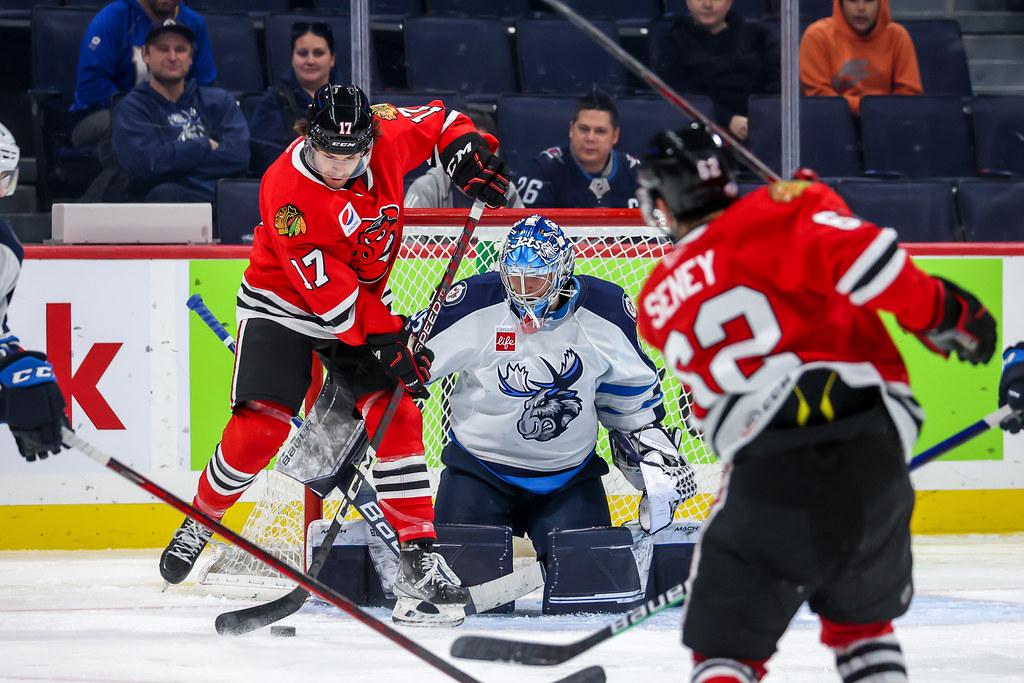 Gust is far from a stranger to the rivalry between the Hogs and their opponent in Saturday’s home opener at the BMO Harris Bank Center.

David Gust is making plays for the Rockford IceHogs this season after two years with the Chicago Wolves. (Photo by Jonathan Kozub/Manitoba Moose)

ROCKFORD, Ill. – Forward David Gust is one of many new faces on this year’s Rockford IceHogs roster. However, Gust is far from a stranger to the rivalry between the Hogs and their opponent in Saturday’s home opener at the BMO Harris Bank Center.

The 28-year-old Gust, a native of Orland Park, Illinois, spent the last two seasons playing for Rockford’s intrastate rival, the Chicago Wolves. The IceHogs signed Gust to a one-year AHL contract this summer as part of bringing in a strong cast of veterans.

“The rivalry was pretty tough last year,” Gust admitted in Rockford’s media session Tuesday. “Being on the Wolves side, Rockford kind of had our number in the regular season. It’s a game you always get up for; the I-90 rivalry, so it’ll be fun.”

Gust was a regular name on the Wolves’ side of the scoresheet. He had four goals and two assists in ten games against Rockford last season, despite the IceHogs coming out on top in eight of the twelve meetings. From his perspective, it was easy to see why Rockford gave Chicago fits.

“They play hard and at the end of the game they were up,” Gust pointed out. “Sodi (Hogs goalie Arvid Soderblom) was standing on his head last year. They just stuck with it and greased out some wins.”

Gust was a big part of the Wolves’ playoff success, with three points (1G, 2A) in Chicago’s sweep of Rockford in the Western Conference Quarter Final. In 18 games, he contributed 12 points (5G, 7A) as the Wolves marched to the 2022 Calder Cup last spring.

“We kind of knew from right around Christmas that if we stuck with it and bought in that we would have a real chance at it,” Gust said. “What a journey it was; there was a cool, good group of guys. The ultimate goal was to lift the cup and to get that was special.”

In his sixth professional season following four years at Ohio State, Gust has been a steady offensive contributor in the AHL by getting to the net and finishing plays. Last season’s 36-point (16G, 20A) effort was a career-high, but he’s hit double-digit goals in four previous campaigns.

Gust was a big part of Rockford’s come-from-behind win in Manitoba this past Saturday. The Hogs trailed 3-0 entering the third period, but rallied with four goals in the third period and won 5-4 in overtime.

Several new IceHogs players factored into the victory. Gust assisted on Luke Philp‘s goal to get Rockford on the board, scored one himself, and eventually set up Brett Seney‘s game-winner in the extra session.

“It was a cool comeback, our first game as a group, Gust said. “Just knowing we’re able to do that going forward for the rest of the year…you’re never out of it.”

The IceHogs would be shut out the following day. Gust admitted that the chemistry is still developing, but that he likes what he sees with Rockford.

“First weekend of the year, we’re happy with a split. Saturday was a little bit better than Sunday,” he pointed out. “We got some things to work on, but some things to build on as well. It takes time. The first couple weeks you get to know guys tendencies on the ice. Off the ice, they’ve got a great group here, a pretty young team but all good guys in the room.”

Along with several AHL signings, Gust was invited to take part in the Blackhawks training camp before coming down to prepare for Rockford’s season.

“Part of why I signed here was to do that,” Gust admitted. “I think my parents enjoyed it the most, but it was cool to have that logo on. Being a Chicago kid, that was kind of a cool part of it. Now that we’re here in Rockford, it’ll be cool to be on the other side of it.”

With Gust remaining in his native state, will his parents mind heading a little further west on Interstate 90?

“My parents will make the trek out,” Gust said with a smile, “but I’m sure they’ll mostly just go to Allstate (Arena, home of the Wolves). It’s a little closer for them; we play there a bunch.”

Rockford and Chicago kick off the first of twelve meetings this season on Saturday night. Puck drop at the BMO Harris Bank Center is set for 7:00 p.m. CDT.