ALLEN, Texas – Day three of training camp for the Allen Americans was a combination of system drills which coach Martinson has used for years along with some new drills run by the other coaches on the ice. There was some power play work and it is abundantly clear Martinson will have a lot of options as he sets up his power play units.
The team practices today and then leaves for Kansas City this afternoon. The training camp schedule shows practice from 11:00 – 1:00 but with a game tomorrow you can expect practice will not go for two hours.
There are a couple of different rules for preseason games. Teams are permitted to dress 18 skaters (it is 16 in the regular season) and two goalies. Teams are also permitted a one minute warmup for a substitute goalie. Players also need to take in mind that any incidents that result in supplemental discipline (i.e. suspension) from this preseason game will carry over into the regular season.
Coach Martinson did confirm after practice some of the experienced players will not go to Kansas City for various reasons and some of the tryout players will be on the road trip.
The preseason game against the Mavericks on Friday (7:05 pm) will not be broadcast by either team. I talked to Mavericks long time writer/insider, Joe Rozycki and he will be live tweeting the game. If you are on Twitter and want game updates, Joe’s Twitter handle is @MavsInsiderJoe.
If you have attended training camp practice this week or are coming to the Red vs White Scrimmage on Saturday (3:15 – 5:00) in the Community Rink you may notice a new coach with Allen. Chris Meriney will be the video coach for the Americans this season but in talking to Steve Martinson you will also see Chris as a second assistant coach. He has been on the ice for each practice thus far. Assistant coach Jason Deitsch is a full time McKinney fireman so his schedule means he can’t be at all practices/games. 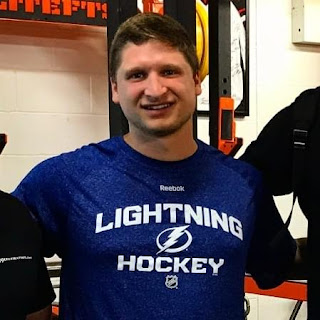 Chris comes to Allen from Colgate University where he was the Director of Hockey Operations. A native of Pittsburgh, Meriney has a degree in Human Performance/Exercise Physiology from the University of Tampa. While in college Chris interned with the Tampa Bay Lightning. Chris has some coaching experience in youth hockey and is also a scout for a USHL team. He has experience planning practices, game day management, video analytics, and statistics. Meriney will be a big help to coach Martinson who has always spent a lot of time breaking down video. Chris will get his baptism behind the bench in the preseason game in Kansas City on Friday. Coach Deitsch will be fighting fires so Meriney will be making the road trip.
The Allen Americans Fan Club has been working overtime this week. This group does everything from picking up players from the airport to providing breakfast at the rink for the team each morning to setting up all of the apartments for the players so they are move in ready complete with dishes, linens, towels, etc. The fan club even helped out at the annual golf outing yesterday. A very busy week for a dedicated group of Allen fans.
I saw the Americans posted pictures of the 1st & 2nd place teams at their golf tournament on social media. Assistant Coach Jason Deitsch was on the winning team and Alex Breton was on the runner up team.

DID YOU KNOW: Riley Gill owns all single season ECHL goalie records for the Allen Americans that are listed in the ECHL record book. Here are the numbers: