ST. JOHN’S, NL – The 2010’s has been a fun decade to look back on regrading Newfoundland professional hockey. 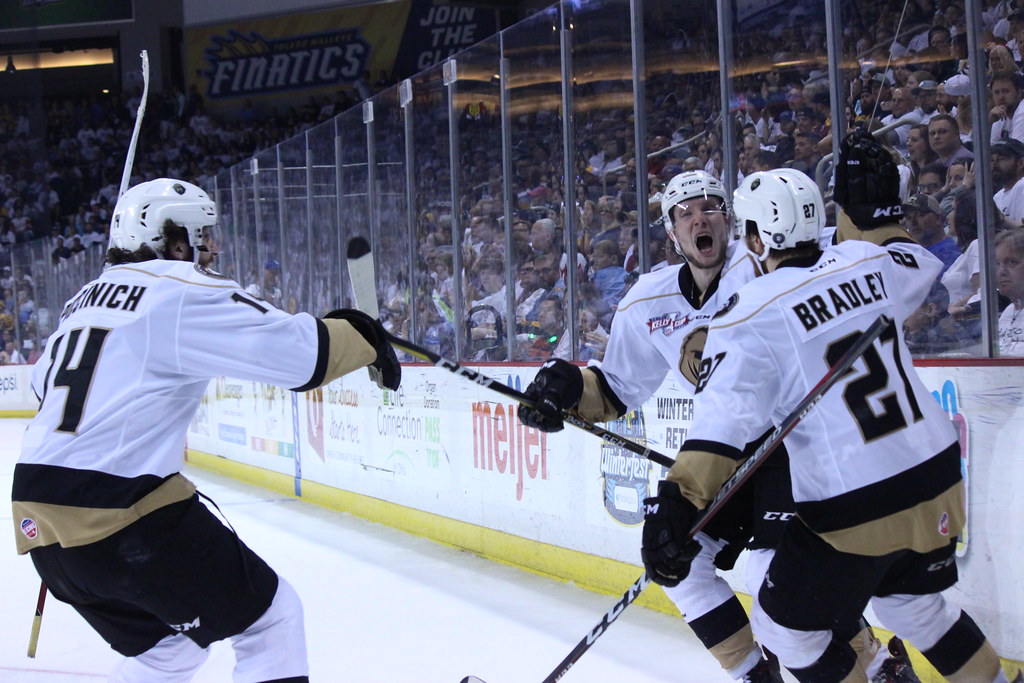 ST. JOHN’S, NL – The 2010’s has been a fun decade to look back on regrading Newfoundland professional hockey. With two rounds of the St. John’s IceCaps, a Cinderella story for the Newfoundland Growlers, and countless other memories, Newfoundlanders can be proud of the decade it’s been regarding pro hockey on The Rock.

THE AHL IS BACK!

After the St. John’s Maple Leafs’ departure to Toronto in 2005, Newfoundlanders and Labradorians waited anxiously for a new pro club. With the QMJHL’s St. John’s Fog Devils flopping after just three seasons (2005 to 2008), it was clear that Newfoundland desired the AHL back in the province. Fans looked on to the Carolina Hurricanes, Florida Panthers, Phoenix Coyotes. or the Atlanta Thrashers to relocate and an AHL affiliate to head back to St. John’s.
In May 2011, the Thrashers packed up and moved to Manitoba to become the second iteration of the Winnipeg Jets. With the move, the Manitoba Moose AHL franchise was relocated to St. John’s, Newfoundland to become the St. John’s IceCaps, and pro hockey was back in the province.

Future NHL draft pick Alex Newhook celebrates the return of an AHL team to Newfoundland in 2011. Photo Credit: The Telegram

Former Newfoundland & Labrador Premier Danny Williams held a charge with the new team. Just hours after the announcement by the AHL, Williams spoke to the media and new fans at the Mile One Centre. One of the fans on hand would be 2019 NHL draft pick Alex Newhook, who held a sign thanking True North Sports. At the rally, Williams used the same iconic words that he once used when signing the Atlantic Accord: “We Got It.”
Oddly enough, the town of Conception Bay South was awarded as the Kraft Hockeyville town that same year with what was supposed to be a game between Atlanta and Ottawa, but later turned out to be the Jets and Sens. This was Newfoundland’s first look at the IceCaps’ parent organization. With so much excitement around the city, organizers had to move the event to the Mile One Centre.
The first season was nothing short of spectacular for the club, with the IceCaps finishing first in their division and making it to the Eastern Conference Final. Spencer Machacek led the team in points while David Aebischer and Eddie Pasquale split time tending goal. Fans roared “Eddie, Eddie, Eddie” after every Pasquale save while the roof of Mile One was ready to explode.
2012-13 was the infamous NHL lockout year, and the St. John’s IceCaps gained some familiar NHL faces, including; Paul Postma, Adam Lowry, Alexander Burmistrov and Ben Chiarot. The season never got them to the playoffs, but the Caps saved everything for the next season.
The 2013-14 season was a whole new adventure for the squad, as the IceCaps made it to the Calder Cup Finals. Fans watched on in anticipation of getting the first Calder Cup Championship in Newfoundland’s history. People filled the arena to the brim, bringing a sea of white in the stands, then filed out into the streets and pubs to cheer on the team. Fans tuned in coast-to-coast in hopes of Canada’s first AHL championship since 2007.
Additionally in 2013, the team revealed its new third jersey, which portrayed a historic Newfoundland trademark in Signal Hill.

With Winnipeg a far distance from St. John’s, True North Entertainment decided that it was going to end its AHL tenure on The Rock. In preparation for a proposed new arena in Thunder Bay, the Jets organization announced that it will only extend the IceCaps’ contract for one more year. Though attendance numbers dropped slightly, fans continued to support the franchise in hopes of reaching an agreement on a new contract.
The deal would never be extended, as the IceCaps moved back to Winnipeg to become the Manitoba Moose yet again and share the MTS Centre with the Jets. Williams vowed to get another AHL franchise to Newfoundland, and made good on his word in quick order.

With the Hamilton Bulldogs relocating to St. John’s in 2015, the second edition of the IceCaps would look a little different. The team turned red, white, and blue to reflect the colours of its Montreal Canadiens affiliation. In what was primarily a Toronto Maple Leafs town, confused fans often wondered which NHL team they should cheer for. Previously, Winnipeg offered a middle ground for fan loyalty, but with many fans still bleeding blue and white, it didn’t translate into solid attendance figures for the IceCaps’ second coming.
Then, in January 2016, John Scott was sent to St. John’s from Montreal, causing a buzz amongst Newfoundlanders. With the improbable story of becoming an NHL All-Star fresh in the minds of sports fans all around, Scott’s arrival (and subsequent All-Star appearance on January 31) gave fans more of a reason to come to the Mile One Centre and see the Version 2.0 IceCaps.

END OF AN ERA

The 2016-17 season was the last for the AHL in Newfoundland, as it was announced that the club would leave St. John’s and move to the pastures of Laval, Quebec to be closer to the Canadiens. While celebrating its 20th year as an AHL market, the final regular season IceCaps games were ones filled with throwbacks and memories. During their final regular season home game, fans were treated with a big thank you, as former IceCaps and St. John’s Maple Leafs players came to life on the Jumbotron. Because the playoff race was so close, fans didn’t know if it would truly be their last.
It wouldn’t spell the end. The IceCaps managed to cling to a playoff spot and play the up-and-coming Syracuse Crunch in the first round. In a hard-fought series full of stubborn coaching mistakes, the IceCaps were defeated quickly three games to one in a best-of-five series. In their final home playoff game, many missed opportunities led St. John’s to double overtime, where multiple goals were waved off in favour of both teams.
Fans were left with a sour taste on home ice with this goal:

At the end of their last playoff game on April 28, 2017, the IceCaps organization posted this video on social media and faded to black. A big question mark hung over the City of St. John’s, with fans wondering if AHL hockey would ever return to Newfoundland again.

The ECHL in NL

Professional hockey wasn’t long gone in the province, and Newfoundland would get its new team — this time, in the ECHL. Dubbed the Newfoundland Growlers, the team’s logo was comprised of a Newfoundland Dog, with the squad itself quickly earning the reputation as a resilient and hearty club after the team first took the ice on October 12, 2019.
In a Cinderella story, the club made it to the ECHL Finals and took home the Kelly Cup in their first year as a franchise. Fans roared as the club marched through the downtown streets, parading with the Kelly Cup. It was Newfoundland’s proudest moment of their storied hockey history, marking the first professional hockey championship in St. John’s.
2019 wasn’t without its hardships, either. Mile One Centre was at it wit’s end with Deacon Investments LTD (the owner of the Growlers), and couldn’t negotiate with Dean MacDonald, who was looking to buy Mile One Centre. With long battles with the city (who owned the Mile One Centre), MacDonald finally negotiated terms with the St. John’s to contract the Growlers for an additional 10 years.
With Mile One nailed down as a long-term tenant and a championship ring for the Growlers, pro hockey is staying in St. John’s for the foreseeable future (with the goals of more success and championships for the Growlers).
Though it seemed like a particularly difficult decade for Newfoundland pro hockey, it most definitely worked out by the end of 2019. With key names like Glen Stanford and MacDonald at the helm and securing the future of pro hockey in the province, fans can look forward to another prosperous 10 years.

WHAT’S YOUR FAVOURITE MEMORY OF THE DECADE?

.@NHL All Star Game MVP, John Scott, scored his first goal of his 2015-16 season with the @IceCapsAHL!

Zack, a Newfoundland native, is covering both the AHL’s Toronto Marlies and ECHL’s Newfoundland Growlers during his holiday break from university. Follow Zack on Twitter and don’t forget to “like” The Sin Bin on Facebook for all your additional AHL, ECHL, and SPHL minor league hockey coverage!