BOISE, Idaho – On July 1, the Idaho Steelheads reached out and extended qualifying offers to four forwards and one defenseman. So, what does that all entail? 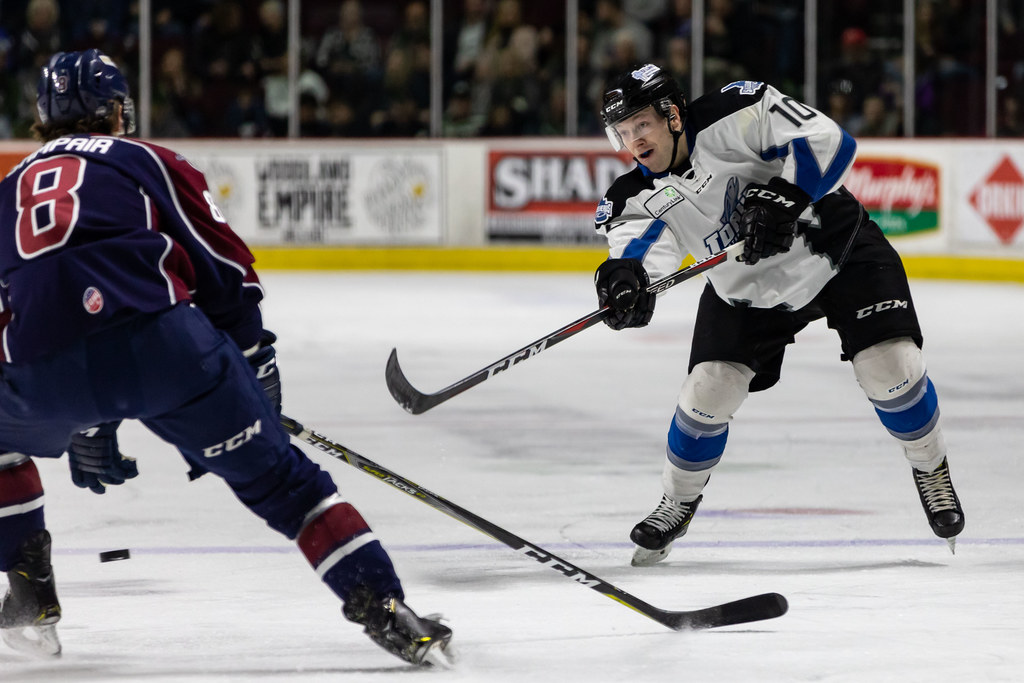 BOISE, Idaho – On July 1, the Idaho Steelheads reached out and extended qualifying offers to four forwards and one defenseman: centerman Tony Cameranesi, utility forward Alexander Dahl, winger Steve McParland, center Marc-Olivier Roy, and d-man Brady Norrish.
So, what exactly does that mean for Idaho and these five skaters?
Well, first and foremost, it means that none of these five are currently signed to an ECHL contract for 2019-20. League rules state that any player signed before June 30 doesn’t require a qualifying offer (or QO for short). QO’s are usually given out as a way to retain player rights for one playing season, which will occur on July 16 after the initial offer expires.

WHO AND (POSSIBLY) WHY?

Cameranesi and McParland have already signed to clubs in Norway and Italy, respectively, so Idaho Head Coach Neil Graham extending QO’s to them appears to simply be to retain their ECHL rights. Dahl, after a solid sophomore season with 25 points (12G+13A), seems to (according to his Twitter bio) be done with ECHL hockey for the time being. Roy, the final piece of an October 2018 trade with Fort Wayne, played in 22 Amercian Hockey League games last season and may be holding out hope for an AHL deal. The same could apply to Norrish, as well, as the rookie out of RIT earned a call-up to the Texas Stars last year after initially signing an ECHL deal with the Steelheads in 2018-19.

DOES THE PAST DICTATE THE FUTURE?

In the previous three offseasons he has extended qualifying offers, Coach Graham has utilized all eight possible QO spots allotted by the ECHL. Again, some of those moves were simply to retain ECHL rights, but a few players actual came back to play for Idaho the following year. A breakdown of the past three years showcases where those players extended qualifying offers ended up:

On June 3, Idaho released its list of protected players. This list is put out as the first wave of securing player rights (for more details, check out TSB’s ECHL Fan Guide). Of the 24 players, 18 of them played for the Steelheads in 2018-19. Five skaters on the list either retired or played overseas last year, but were protected just in case they wanted to make a return to the ECHL in 2019-20. One skater (Cameranesi) had his rights traded to Idaho after the regular season ended. Now that qualifying offers have been extended, this list is pretty well meaningless…but here it is, nonetheless!

WHAT ABOUT THE REMAINING PLAYERS FROM LAST SEASON?

Some players from last season won’t appear on either the qualified offers or protected list because they are on NHL or AHL deals. Examples include forwards Tony Calderone (NHL) & Brad McClure (AHL), goaltenders Colton Point (NHL) & Tomas Sholl (AHL), and defenseman Ondrej Vala (NHL). Other skaters simply had their AHL contracts expire (d-man Nolan Gluchowski, centermen Robbie Payne & Elgin Pearce, left winger Spencer Naas, and forward Henrik Samuelsson) and are either testing the market or haven’t had their signings announced yet.
As of July 3, forward A.J. White, defenseman Jeff King, and center Kyle Schempp have been announced as Idaho signees for 2019-20.

Keep track of all the signings and movement during the 2019 ECHL offseason by visiting our ECHL Transactions page! Plus, follow along on Twitter (@SinBinIdaho) for all the latest Idaho Steelheads news and analysis!