TULSA, Okla. –  The Tulsa Oilers have struggled to hold leads against the Utah Grizzlies all year. 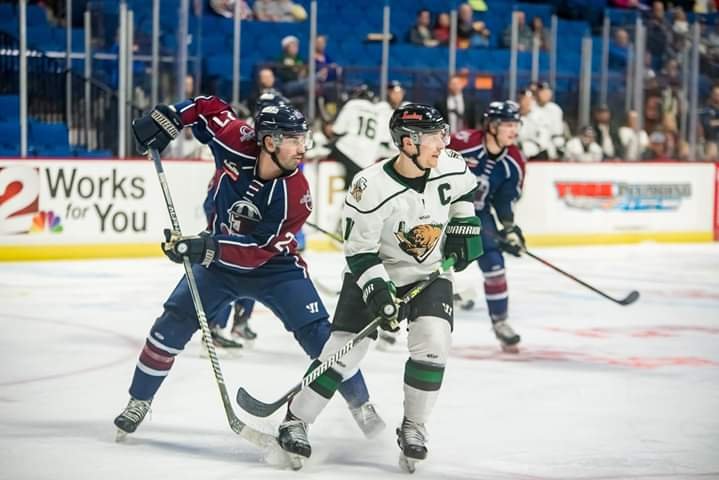 TULSA, Okla. –  The Tulsa Oilers have struggled to hold leads against the Utah Grizzlies all year. Tuesday, the Oilers once again watched as the visitors from Salt Lake found their offensive stride and shot past the staggering home side.
Utah rallied from deficits of 1-0 and 2-1, scoring four unanswered goals in the final 27:20 of action to claim a 5-2 victory in front of a disappointed crowd of 4,424 inside the BOK Center. Tuesday was the fifth time in the six-game season series between the clubs that Tulsa has struck first and held a lead in the second or third period. Despite this, it was also the fifth time in six games that the Grizzlies secured the two points. Tulsa finished the season set with just three of a possible 18 points (1-4-0-1) against Utah.
The Oilers played well and won the first meeting 3-1 on December 19, but have been completely unable to slow the talented Grizzlies offense in the five games since. Utah averaged five goals per game and scored at least four times in each as they swept the final five clashes. The Grizzlies have seized momentum and refused to let up, closing with runs of four, five, and four unanswered goals to lock up the past three wins over the Oilers.
Tulsa opened the scoring 10:21 into the first period when a broken play sent the puck fluttering up in the air off stick of Cory Ward. The puck landed at the feet of an open Charlie Sampair in the slot, who took advantage of the fortune to deposit his 12th goal of the year and give Tulsa a 1-0 edge. Sampair and Ward were the two best Oilers on the ice on Tuesday, and they would pair up to put another puck later on.
Tulsa’s lead didn’t last very long, however, as Utah pulled even less than three minutes later. It was the first of two very similar goals for the Grizzlies Yuri Terao, as he found the hole in the defense and positioned himself for a rebound in the lower left corner of the Oilers zone. Jack Jenkins spotted this and fired a low shot from the perfect angle to force Tulsa tender Olle Eriksson Ek to kick the rebound directly to a salivating Terao, who slammed it home to tie the game at one with 6:57 left in the opening frame.
The Oilers regained the lead 7:36 into period two, as Ward and Sampair once again teamed up to solve the Grizzlies. This time, Sampair intercepted a pass in the Utah zone before spinning and sending the puck to Ward in the near dot. Ward immediately whipped a wrister past Utah netminder Martin Ouellette to make it 2-1 Tulsa with just over half a game to play.
The Oilers held the lead for just over five minutes this time, but the Grizzlies relied to their power play and used it to turn the tide for a third straight meeting. Utah did an excellent job of cycling around the zone and moving without the puck, slowly pulling Tulsa’s penalty kill unit away from the slot. The Oilers were once again caught paying too much attention to the shooter, and Terao was able sneak behind the defense and bury another rebound from nearly the exact same spot as his first of the night.
This lit a fire under the Grizzlies as they focused their energy on striking while the iron was hot. Utah turned up the pressure; the quick Griffen Molino received a pass at full speed and suddenly cut between a trio of flat-footed Tulsa defenders to test Eriksson Ek one-on-one. Utah’s leading scorer finished the highlight-reel goal by pulling the puck to his backhand and lifting a shot over the glove of Eriksson Ek to provide the eventual game-winning tally.
Tulsa knew it had already been caught overextended on the PK, and was determined not to let that happen once again when Utah was given a late second-period power play. The Oilers attempted to fall back and jam the slot to prevent rebounds, but this didn’t faze Utah forward Josh Dickinson, who calmly took the extra time he was given to step up and send a shot into the upper-90 to suddenly send the visitors to the third with a two-goal cushion.
The Oilers outshot the Grizzlies 12-8 as they attempted to rally over the final 20 minutes, though there would be no happy ending for the home squad in this story. Utah held off the Tulsa attack, taking advantage of a turnover and icing the game. The Grizzlies were able to win a battle along the far boards to steal the puck and send it down low for a quick jam attempt. The puck slipped under the stick of Eriksson Ek and came to a rest in the middle the crease. Utah was once again just a little too quick for Tulsa, however, as Joe Wegwerth was first to the biscuit and simply tapped it home to provide the final score of 5-2, Utah.
The loss keeps Tulsa tied for fifth with Wichita in the Mountain Division standings, four points back of fourth place Rapid City. This sets up a big weekend, as the Oilers and Thunder meet on Friday and Saturday with four huge points on the line. The action starts Friday at 7:00pm CST in Wichita before returning to Tulsa for a Saturday night clash.
You can follow the Oilers all season by following us on Twitter.  Simply follow @SinBinOilers for our Tulsa take, and @SinBinNews for all your AHL, ECHL, and SPHL news and notes.