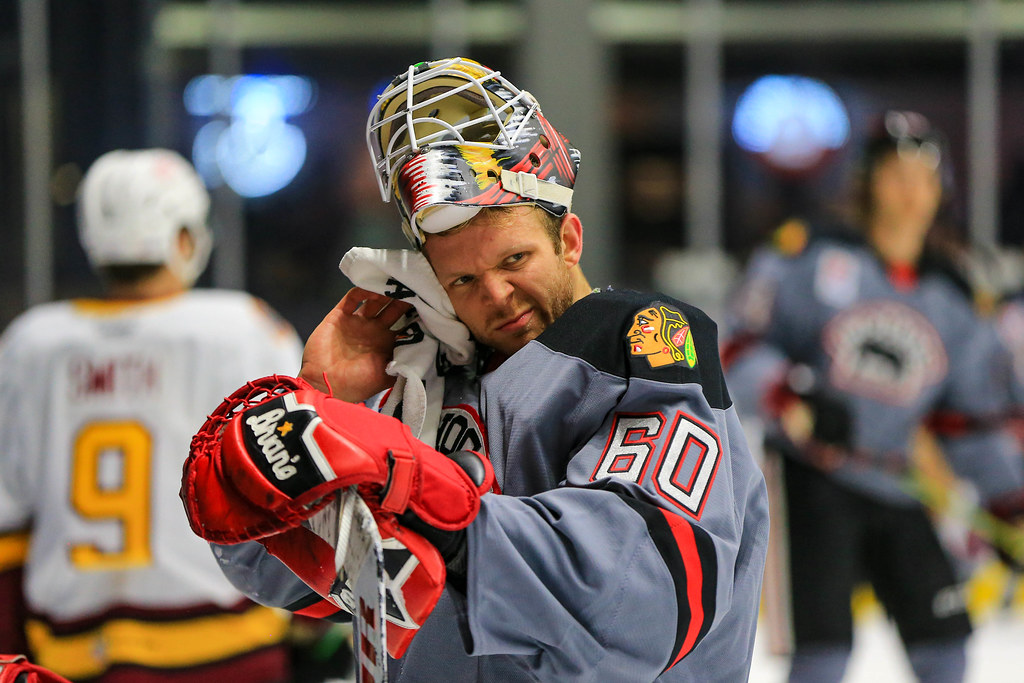 Delia Shines For ‘Hogs In Return To Crease

Collin Delia made the most of a rare start in Chicago Saturday night. (Photo by Brad Repplinger/Rockford IceHogs)

Delia Shines For ‘Hogs In Return To Crease

Rockford, Ill.-Rockford IceHogs goalie Collin Delia may have won the most important game of his career Saturday night. Too much hyperbole for a mid-November tilt with the Chicago Wolves? Not for a 27-year old goaltender that’s being used as infrequently as Delia.

Saturday night, the Rancho Cucamonga, California native was between the pipes for the Chicago Blackhawks AHL affiliate for the first time in nearly a month. Delia’s 31-save performance in Rockford’s 3-2 shootout win over the Wolves in Rosemont comes at a most crucial time for the fifth-year pro.

Before Saturday, Delia had played eleven games over the previous 20 months. Thanks to last year’s NHL taxi squad, time in the crease has been at a high premium for Delia.

Coming into the stoppage that ultimately ended the 2019-20 campaign, Delia was being handled like a future NHL backup for the Blackhawks. Having played in 16 games for Chicago the season before, Delia was getting his work in with the IceHogs as the spring of 2020 began.

Beginning in February, Delia started 12 of Rockford’s final 17 games before play was halted in mid-March. Since then, Delia has felt the crunch in net more than any other goalie in the organization over the past two seasons.

Malcom Subban was obtained in the summer of 2020. With the NHL requiring three goalies on the 2020-21 rosters, the Blackhawks grouped Delia with Subban and Kevin Lankinen. Delia had shaky performances in his first two starts of the season and quickly became the odd man out in Chicago’s goalie mix.

He sat, inactive, for six weeks before requesting and receiving a conditioning assignment to Rockford, where he played four games in two weeks. After shaking off some understandable rust, Delia beat the Iowa Wild in back-to-back starts March 6 and 7 with solid performances.

Two months later, Delia got into his next game, a 5-2 loss to Carolina. Relieving Subban, Delia stopped all 19 shots he faced. He was 1-1-1 in three starts following that contest.

This past summer, Marc-Andre Fleury‘s acquisition crowed the goalie room further. The Blackhawks passed Delia and Subban through waivers, perhaps hoping one would be claimed. They were not.

Based on then-coach Derek King‘s comments earlier this month, Chicago’s plan was to give rookie Arvid Soderblom half of the starts in Rockford this season, dividing the other half to the tandem of Subban and Delia.

“Right now, when those guys (Delia and Subban) came down, Soderblom was obviously going to play a lot of the games,” explained King back on November 2. “So, it’s always been Soderblom, plus one of those guys. Then, the next weekend, it’s been Soderblom plus Delia or Soderblom plus Subi. Those guys (Delia and Subban) haven’t gotten in rhythm at all. They’re kind of playing once every two weeks, which is hard to be fresh and be sharp.”

Subban’s weekend was first up. Delia gave up five goals to the Wild in his season debut on October 23. He dressed in Texas on October 28 as Subban’s backup. Subban was used the last two weeks in tandem with Soderblom. Where was Delia? The answer arrived on November 16 from Sorensen.

“Collin was on COVID protocol the last ten days here. He just got back this week,” Sorensen explained when discussing his goalie situation.

Delia practiced this past week and backed up Soderblom in Friday’s 6-3 win over the Wolves at the BMO Harris Bank Center. On Saturday, the crease was finally his.

After the Wolves put a shorthanded chance and a power-play goal past him early, Delia settled down and denied Chicago’s last 28 shots in regulation and overtime. He then stopped four shootout attempts from the Wolves to allow Rockford to prevail.

It can’t be overstated how important this result was for Delia. Meanwhile, the issue remains; Rockford has three goalies who are capable of carrying the workload. There just aren’t enough minutes to go around.

In the current state of affairs, the best Delia can hope for is a start every other week. It is poor asset management by the Blackhawks, who signed Delia to a three-year, three million dollar contract back in February of 2019.

A goalie needs to be traded or loaned out. The organization either can’t or won’t make that move happen. Delia, who, like Subban is an unrestricted free agent this summer, isn’t going to have many chances to make his case for being an NHL goalie. Saturday night was a pivotal game for his future.