Dellandrea’s trio of goals led all Texas Stars players in points for the night, and the win helped the team keep pace with Grand Rapids for the final playoff spot 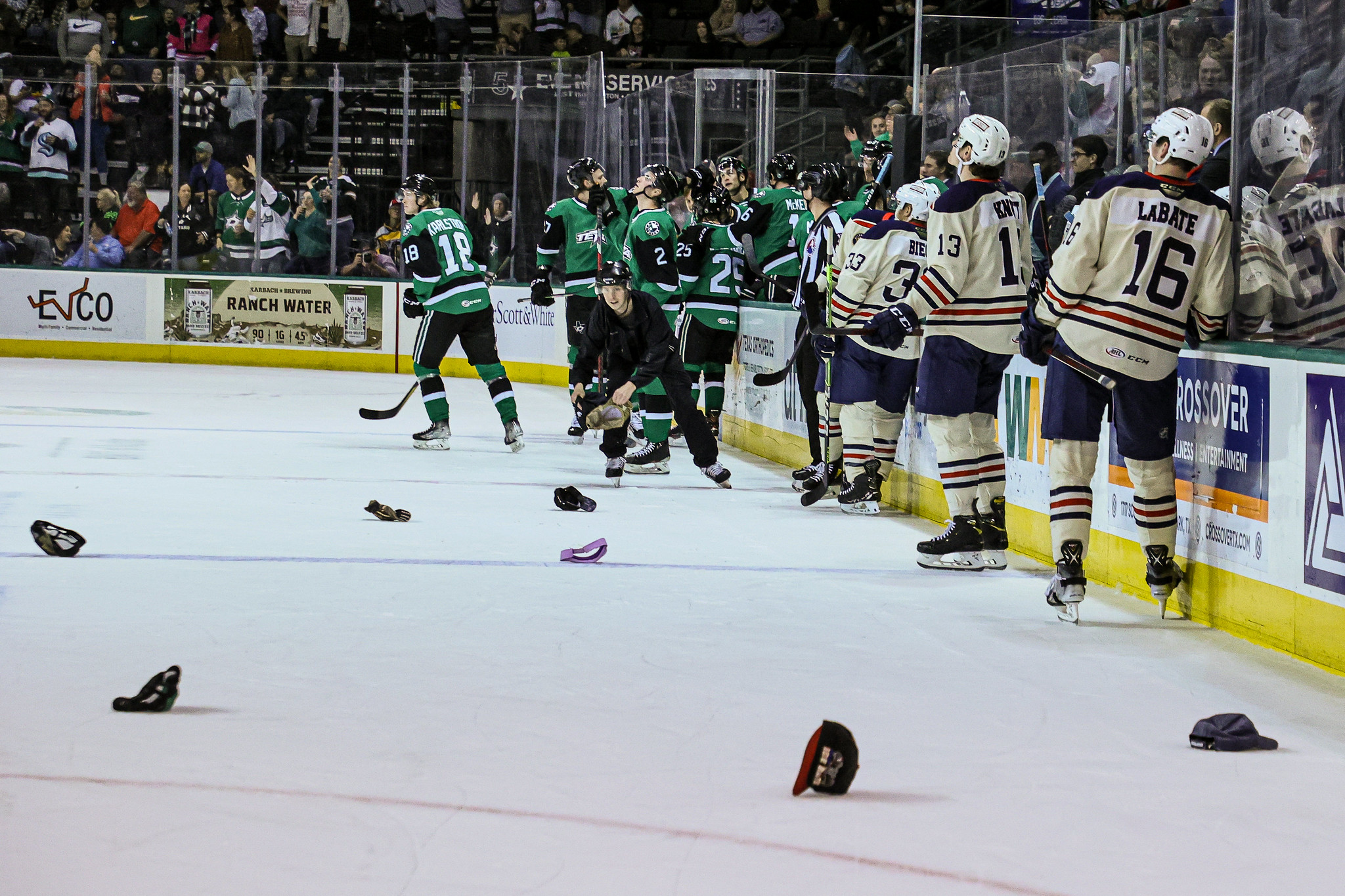 CEDAR PARK, Texas – The Stars returned to home ice after a two-week-long road swing. Fighting for playoff positioning, the Stars would need to defeat division rival Milwaukee to continue their push for the postseason. In what was the most thrilling game of the year, the Stars eeked out a 6-5 win in the shootout.

The scoring came early and often Friday night. Breaking the ice less than six minutes into the game, Mitch McLain put the Admirals in front. The Stars and Admirals traded scoring chances at an incredible pace before the Stars went to the penalty kill late in the first. During the penalty, Ty Dellandrea cleared the zone while fighting off two defenders to spring his own breakaway. On the break, Dellandrea beat Connor Ingram through the five-hole to even the score with a shorthanded goal. Milwaukee answered right back with a goal from Egor Afanasyev and went into the break with a one-goal lead.

Opening up the second period, the Stars were hounding the Admirals at every turn. Just over two minutes in, Max Martin sped through the defense and dropped it off for Anthony Louis who sniped one top shelf to tie it up. Milwaukee clamped down and denied the Stars the chance to take the lead. Midway through the period, Mathieu Olivier gave the Admirals their third lead of the night. Like the two before it, this lead would not last. Dellandrea slipped past the defense on the right boards and got Ingram to drop into the splits before tucking it in on the forehand. Less than a minute later, Louis would net his second of the game as well and give the Stars a 4-3 lead. The Stars threatened immediately after with two more high danger shots on goal. The Stars would earn a power play with just under five minutes left in the second. On the power play, Dellandrea completed the hat trick and gave the Stars a two-goal advantage. The Stars held onto that lead and went into the break ecstatic with the results of their second period.

The Stars tried to salt away the final 20 with pure defense and didn’t threaten for much of the period. With that approach, Milwaukee cut into the lead with 12 minutes left. Tommy Novak got on the board to make it a one-goal game. A late penalty led to a Milwaukee power play where they would tie it up at five. Surrendering the two-goal lead meant we were headed to overtime.

The overtime period featured a couple of high-danger for both squads. With less than ten seconds to play, Adam Scheel saved a shot and started a breakout instead of freezing the puck. That decision sprang a 2-on-0 break where Joel L’Esperance deferred to Louis, who gathered the drop pass and fired a shot, but a sliding glove save at the goal line prevented the Stars from claiming the win in overtime. Half of the puck was across the line when Ingram snatched it out of the air. And, the clock expired at the same time the shot was saved. Because of that, we went to a shootout. Louis and Tanner Kero scored on their chances and Scheel stopped both shots he faced. The Stars earned a huge two points, which keeps them in the sixth position in the Central Division, just percentage points behind Grand Rapids in the race for fifth.

Friday night served as a coming-out party for Ty Dellandrea. From the initial puck drop to the final whistle, he was noticeable and effective at both ends of the ice. He looks like someone playing with confidence and against Milwaukee, he was rewarded for his effort. A goal down a man, at even strength, and on the power play is a rare feat and he did it in less than two periods. He’s creating chances on his own, setting up his teammates with solid scoring opportunities, and doing more than his fair share on the back end.

Earlier in the season, Dellandrea showed flashes of his first-round potential but looked a little lost out there, it felt like he didn’t have much chemistry with his linemates. Just a few weeks ago, the arrival of Marian Studenic sparked his offensive acumen. After Studenic’s call-up to the NHL, there was reason to believe there could be some regression. So far, that does not seem to be the case. We’ve known since the beginning of the season that this would be the last season Dellandrea was in the minors. His recent performances reinforce that belief as he looks ready for a full-time role with the big club in Dallas next season.

He and the Stars will have the opportunity to sweep Milwaukee on Saturday as they close out their two-game homestand. After this series, the Stars will have five home games remaining in the regular season as they continue to fight for a spot in the Calder Cup Playoffs.