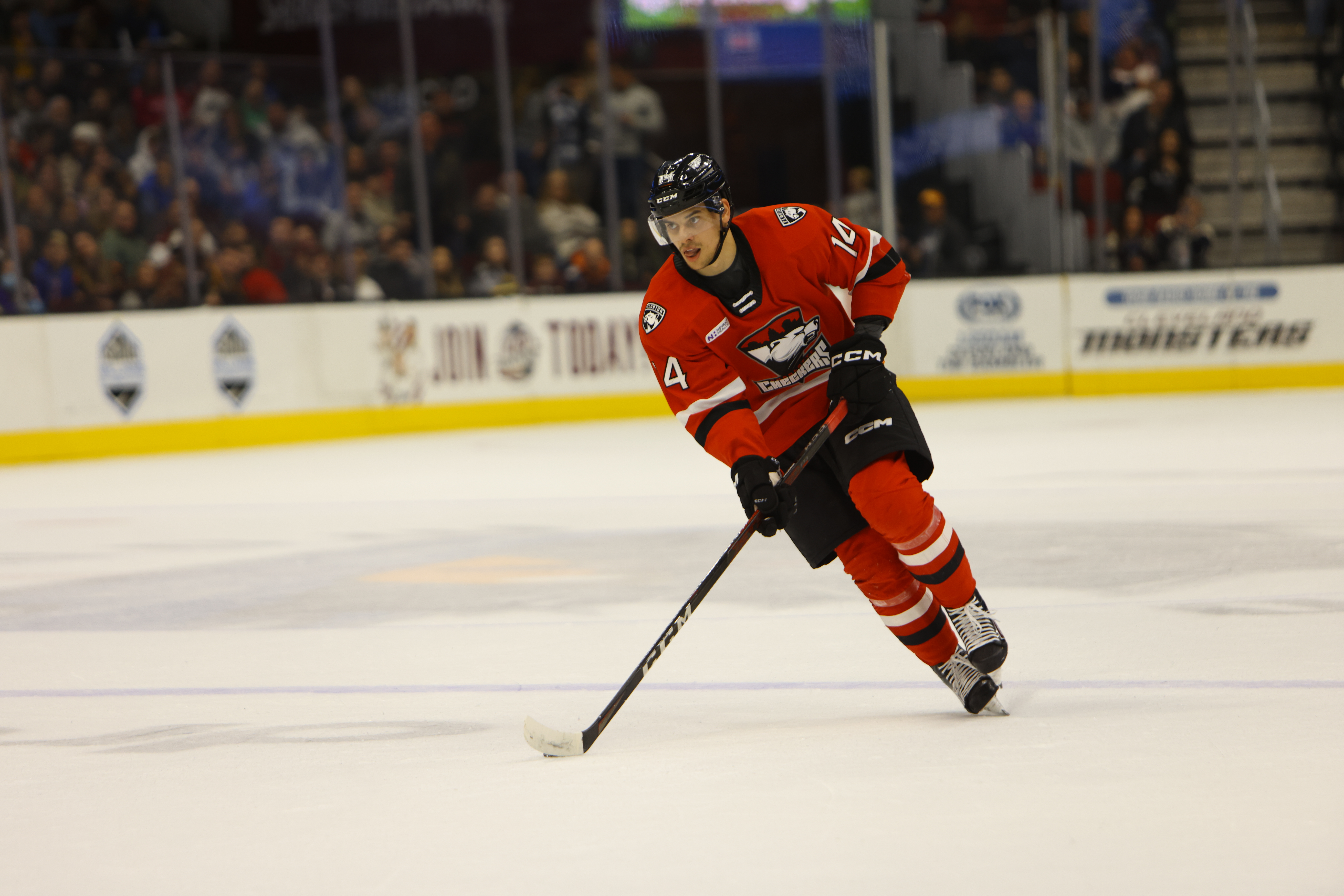 #AHL | The Cleveland Monsters hosted the Charlotte Checkers Thursday for Batman Night.
Check out the recap from Zachary Martin as he explains how the villains won this battle.

CHARLOTTE, N.C. – The Charlotte Checkers traveled to Cleveland to face the Monsters after the winter break to finish off 2022. The Monsters were having their Batman Night at the Rocket Mortgage Fieldhouse while wearing Batman-themed jerseys. Despite all the fancy jerseys, Batman-themed fan interactions, and so much more, the Checkers played villain to secure a 3-2 win.

One period to get the holiday rust off, that's all pic.twitter.com/THTJ21y9Zv

For most of the first period, it seemed like both teams were trying to find their groove with everyone coming back from winter break. In the first even minutes of the period, there were only a couple of penalties, one by each team, but not many shots on goal. Although, that would change for the Monsters at the 7:52 mark of the period. The goal came from one of the guys that were mentioned in the Checkers series preview against the Monsters. It was scored by none other than Trey Fix-Wolansky. Fix-Worlansky was in the right place at the right time to knock the puck into the wide-open net to make it a 1-0 lead for the Monsters.

Checkers goaltender Alex Lyon made the initial stop but Fix-Wolansky was right on the doorstep and just pushed the puck home. The goal was Fix-Worlansky’s 13th of the season and the lone goal of the period. The Monsters went into the intermission with a 1-0 lead while also leading in shots-on-goal 11-7.

While the first period seemed to be all Cleveland, it would be Charlotte who had control of the second period. The first Charlotte goal of the period came at the 9:02 mark. By then there were three penalties, two of them against the Monsters. The one Checkers penalty was served by Justin Sourdif for a too many men penalty. Although, he would get the Checkers on the board just seven minutes after serving the penalty. Just like Fix-Worlansky in the first period, Sourdif placed himself in the right spot to grab a rebound off of Cleveland’s goaltender Jet Greaves. Sourdif grabbed the rebound and slotted the puck past Greaves, tying the game up for the Checkers. The goal was Sourdif’s fourth of the season.

Sourdif just like Fix-Wolansky being in the right place at the right time. It ties the game 1-1. #CLTvsCLE pic.twitter.com/bx1TsYkNu2

The game wouldn’t stay tied for long, as three minutes later, the Monsters took the lead back. At the 12:36 mark of the period, the other Monsters player who was featured in the series preview, Jake Christiansen,made it 2-1 for Cleveland. Christiansen was just brought back down from the Columbus Blue Jackets a couple of days ago and scored his first Monsters goal of the season. It seems like the Monsters players who were featured in the series preview wanted to prove why they were in that article. Alas, Christiansen would get the Monsters back in the lead at this point of the game.

First of the year for @monstershockey D Jake Christiansen to regain the lead for the hometown team. Quite the triumphant return after an extended stint in the NHL.@fphmonsters @fphcheckers

Luckily for the Checkers, the next seven minutes of the period would help be the deciding factors for the rest of the game. At the 17:17 mark of the period, newly returned from the Florida Panthers, Grigori Denisenko, scored one of his two second-period goals. He received a beautiful pass right into his wheelhouse at the middle of the zone near the blue line from Jonny Ludvig. It seemed like Denisenko was going for a massive one-time shot but the puck seemed to become an off-speed pitch of sorts and fooled Greaves to tie the game back up once again. Denisenko wanted to make a presence in this game after being sent down, like the Monsters’ Christiansen, and that certainly did happen for Grigori on this one. It was Denisenko’s fourth of the season, but not his last for the night.

Denisenko with a powerful off-speed slapper to tie the game once again. #CLTvsCLE @FPHAHL pic.twitter.com/0VKPZclChY

Denisenko scored his second goal, not only for the night but for the period. not even two minutes after his first one. What seemed to be a penalty, the play was called for a penalty shot. He ended up scoring on Greaves after some nifty stick work to slot it home at the 19:04 mark of the period. The penalty shot goal became his third point of the game. Denisenko ended up being a catalyst for all three Checkers’ goals in the second period. It was Denisenko’s fifth goal of the season, and it ended up being the game-winning goal as well.

Denisenko with two in the game, both in the second period. This one on the penalty shot! This is also his THIRD point of the night.

THREE IN A ROW pic.twitter.com/qveHT7as30

While there were no goals scored in the third period, there was some very late drama to close this one out. At the 19:01 mark of the period, Ludvig drew a very badly-timed tripping penalty to put the Checkers on their fifth penalty kill of the night. To add insult to injury, the Monsters had already called Greaves to the bench and now had a 6-on-4 powerplay advantage. Luckily by this point, the Checkers were a perfect 4-for-4 on the penalty kill for the night. Lyon was the main reason why this game ended with a 3-2 win as he stood on his head throughout the Monsters’ powerplay onslaught. He stopped everything that was thrown at him and managed to help secure the win for the Checkers. In the end, the three goals in the second period and Lyon playing out of his mind were what gave the Checkers their third-straight win.

Lyon would be credited for the win, his eighth of the season. He ended up saving 23 of the 25 shots he faced from the Monsters. His late third-period heroics are what helped the Checkers gain their 15th team win of the year. The Checkers are now 15-11-2-1 with 33 points on the year after 29 games played. They are now currently fourth in the Atlantic Division, 14 points behind the first-place Hershey Bears. Although, they are only two points ahead of the Wilkes-Barre/Scranton Penguins who do have three games in hand over the Checkers.