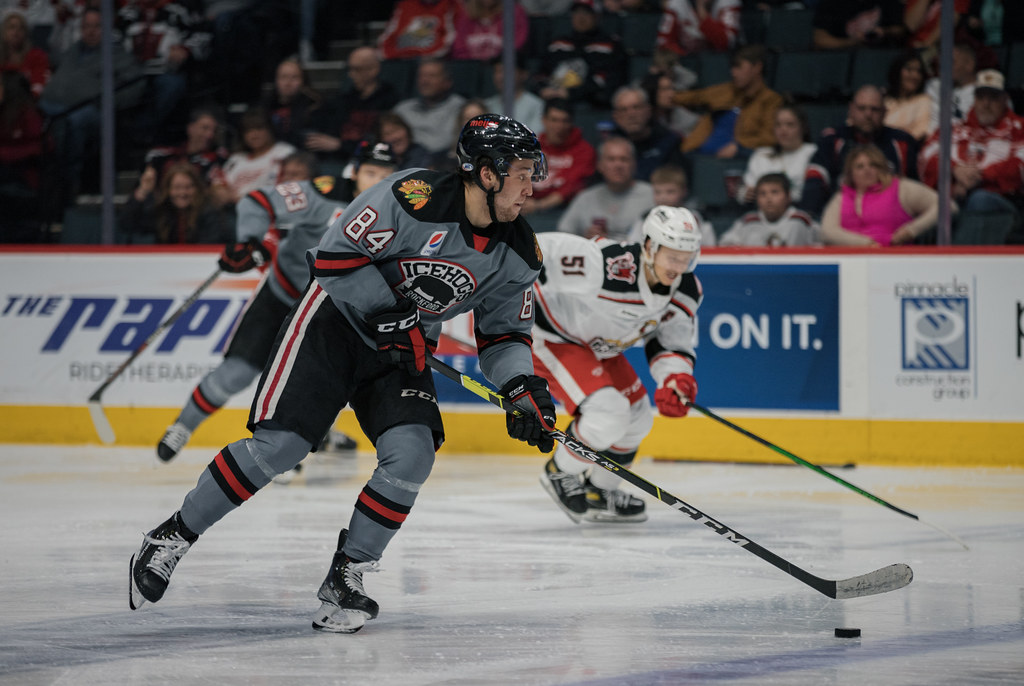 ROCKFORD, Ill.-Despite many missing names at the top of the lineup, the Rockford IceHogs earned four of six possible points on a three-game road trip last week. The IceHogs roster continued to evolve over the weekend while Rockford split games with the Grand Rapids Griffins.

Rockford ran up a three-game winning streak with a 2-1 triumph in Milwaukee Wednesday and a 4-1 win in Grand Rapids Friday. The wheels came off in a 6-2 loss to the Griffins in the finale, but the Hogs still went 2-1 for the week. With an 8-8-1-1 record, Rockford is tied for fourth in the Central Division standings with Grand Rapids.

After goalie Malcolm Subban anchored Wednesday’s victory, Collin Delia posted a masterful 40-save performance in Friday’s win. Philipp Kurashev had two goals in his second game back with the IceHogs since being assigned to Rockford on November 29. Ian Mitchell and Garrett Mitchell also chipped in with goals.

During Saturday’s rematch, Grand Rapids jumped out to a 5-0 lead in the first 20 minutes. That was far too much for the IceHogs to overcome, though Carson Gicewicz and Alexander Nylander scored for Rockford in the middle frame.

The Griffins hold a one-point advantage on the IceHogs. However, both teams spot a .500 points percentage. With three division teams (Chicago, Grand Rapids, Milwaukee) playing 76 games instead of the 72 games scheduled for Rockford, Iowa, Manitoba, and Texas, points percentage will be the determining factor in postseason consideration.

After learning of several players being out of action on Tuesday, there were some more subtractions to the lineup this past week.

The Blackhawks traded Subban to Buffalo on Thursday. Dylan McLaughlin, who has been a steady offensive presence in the lineup, was held out of Saturday’s game in Grand Rapids due to the league’s COVID-19 protocol.

Rookie defenseman Jakub Galvas was chasing down a loose puck early in Saturday’s game when Luke Witkowski delivered a big elbow. The hit came in the corner of the Hogs zone, catching Galvas in the head. Galvas also struck his head on the plexiglass; he missed the rest of the game and was placed into concussion protocol Monday.

On Saturday, Ian Mitchell was recalled by Chicago, leaving the Hogs a bit thin on the blueline. The Blackhawks addressed this on Sunday, reassigning Wyatt Kalynuk to Rockford. Rockford recalled defenseman Cliff Watson from the Indy Fuel of the ECHL Sunday.

Goalie Arvid Soderblom did not dress for any of the three road games this week. On Monday, the team announced that he had entered concussion protocol. On Friday, Cale Morris was recalled to Rockford from the Fuel to back up Delia. Morris wound up relieving Delia in Saturday’s loss, making 17 saves on 19 shots in 50 minutes of action.

With McLaughlin unavailable Saturday, Chad Yetman was a late call-up from Indy. Yetman, who has five goals and nine assists for the Fuel in 15 games, was in the lineup for interim coach Anders Sorensen Saturday night.