The Utica Comets make it seven straight wins after a stellar 38 save performance from Michael Di Pietro, to defeat the Hershey Bears in the shootout

HERSHEY, Penn. – Friday night, the Comets won an unprecedented sixth straight game to begin their season. Saturday night, the Comets attempted to make it seven when they hit the road to face off against the Hershey Bears.
The sixth win for the Comets came off the backs of the team’s fourth line. It was a banner night for Francis Perron, Vincent Arseneau, and Carter Bancks at the Adirondack Bank Center, as the three combined for three goals and four assists all at even-strength.
While the team was able to notch another five-goal game, they weren’t without their faults. Multiple times during Friday’s game against the Devils, the Comets were caught out of position on shorthanded rushes or caught looking outright lethargic in their defensive coverage. The stellar goaltending of Zane McIntyre mostly masked these shortcomings, but against better teams as the season progresses, the holes in the teams’ defensive game could get exposed. For now, the Comets offensive prowess will suffice in being the difference-maker each night.
The team had a pretty rough midnight bus-ride to get to Hershey from Utica, so there likely won’t be too much time to work on the defensive coverage problems that plagued the Comets against the Devils. To make it seven in a row, the team would have to shore-up on their coverage on the fly, while hoping to maintain their insane goal-production rate with their new linemates.

Somewhat surprising to see, after Friday’s 5-1 victory over Binghamton, that head coach Trent Cull decided to shake-up the Comets forward lines. The Comets had to take a midnight three-hour-long bus-ride into Hershey, so certainly, fatigue would play a factor in Saturday night’s activities. Adding a shake-up to line-chemistry on top of that seems like a disaster waiting to happen.
Forwards:

The game against the Hershey Bears was not an impressive one from the Comets perspective.
To start, off the opening ten minutes of the game were quite uneventful with the Comets barely edging the Bears in shots, four-to-three. The game began to get pretty chippy after a scrum between the teams ensued in front of Bears tendy, Vitek Vanecek.
That chippiness eventually led to coincidental roughing minors awarded to Olli Juolevi and Kale Kessy. The sequence of events came after an offensive drive from the Bears resulted in Ashton Sautner getting shoved down to the ice from behind. The Bears’ Kessy jumped onto Sautner from behind during the scrum. Fortunately, Juolevi came to Sautner’s defense and threw Kessy in a schoolyard headlock to prevent him from doing anything stupid.
For the fifth straight game, during the two minutes of 4-on-4 hockey, the Comets capitalized first to open the scoring. The goal occurred at the 10:24 mark of the period after Sven Baertschi launched a beautiful saucer pass through the neutral zone onto the tape of Adam Gaudette’s stick. Gaudette was able to enter the zone down the left-wing to score off a quick wrister over the right shoulder of Vanecek.


After controlling the majority of play during the brief period of 4-on-4 hockey, the Comets Nikolay Goldobin and the Bears Erik Burgdoerfer picked up coincidental minors after the two exchanged slashes in the Bears end. The game was utterly downhill for the Comets at this exact moment.
Beginning with the Goldobin/Burgdoerfer penalty, the Bears started a chain of relentless pressure against the Comets. The Bears closed out the period edging the Comets in shots four-to-two over the remaining eight minutes of play. The Comets ended the period with a shot lead of ten-to-seven; unfortunately, it would be the last time the team would sustain any form of meaningful offense for the remainder of the game.
For the next 40 minutes of regulation, the Comets were utterly dominated, as the following shot graph shows. 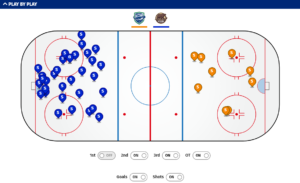 The story of the game was Comets rookie netminder, Michael Di Pietro, standing on his head as he faced shot-after-shot from a relentless Hershey Bears team. After being on the receiving end of a healthy seven shots in the first 20 minutes of the game, the Comets went on to allow 32 shots on Di Pietro over the next 45 minutes.
Fresh off his two-goal night against Binghamton, forward Vincent Arseneau attempted to spark up the Comets by getting in an old-school scrap with Kessy. The fight began after Arseneau landed a massive, clean hit on Bears rookie defenseman Martin Fehravary.
The scrap, however, wasn’t enough to light a fire under the boys. With 13:53 left in the third period, Bears defenseman Alex Alexeyev launched a rink-wide feed to Steve Whitney. Whitney had the puck checked off of his stick by Comets defenseman, Jalen Chatfield, but Bears center, Phillippe Maillet picked up the loose puck to then send a wrister under the glove of Di Pietro. Maillet’s goal tied the game at one and was the Bears 25th shot of the night.


As was the story for the majority of the Bears chances against the Comets, the forward groups had incredibly lethargic backchecking efforts. Too often in the game against Binghamton, did the Comets rely heavily on their goaltenders to bail them out. Saturday night, however, the Comets were unable to rely on their penchant for goal-scoring to make up for their lackadaisical defensive efforts. Thus, rookie netminder, Di Pietro was put in a situation where he had to come up with the heroic save on nearly every play.
With 8:52 remaining in the third period, the Comets registered their second shot of the period. After having outshot the Bears ten-to-seven in the opening frame, the Comets went on to record just nine more shots across the second and third periods as well as overtime.
In the waning thirty seconds of the period, Olli Juolevi attempted to clear the Comets zone. Juolevi’s clearing attempt, however, went off the stick of Brian Pinho right out front of Di Pietro’s crease to Bears left-winger, Beck Malenstyn. Malenstyn’s turning slapshot went off the bar and wide, and would be the Bears last shot in regulation.
Overtime was more of the same as the Bears outshot the Comets six-to-one over the final five minutes of play. Once the buzzer rang to end 65 minutes of play, Di Pietro had registered a total of 38 saves on 39 shots, good for a 0.974 save% and a goals-against-average of 0.92.
Di Pietro was the hero in the shootout as he stopped all three shots from Matt Moulson, Christian Djoos, and Axel Jonsson–Fjallby.
Reid Boucher sealed the deal for the Comets as the final shooter in the shootout.


Not much more can be said about the Comets play. The Comets have some time to work on the defensive side of the game. They’ll need to be better defensively, especially if their offense dries up like it did against Hershey. This writer believes it may have been a questionable decision to shuffle the lines after a late-night bus-ride for a road game at the end of a back-to-back. The chemistry and cohesion weren’t there during the game.
The win was nonetheless impressive due entirely to the stellar gameplay of rookie netminder Michael Di Pietro, who currently sits on a .940 save percentage with a goals  against average of 1.62. Phenomenal numbers for a rookie goalie whom many had doubts over, due to his size. This game ought to be an excellent silencer to his doubters, as he put a weak Comets team on his back to increase the Comets win-streak to seven games straight.

The Comets return to action this upcoming Wednesday when they face off against the Binghamton Devils for their third of eight matchups this season. Puck drop is at 7:05 pm EDT / 4:05 pm PT.