CINCINNATI – Sports at any level are a combination of skill, teamwork, and luck. In hockey, this luck factor seems to play a larger role than in other sports, and the aptly named “puck luck” influences outcomes of games more than most of us care to admit. Fortunately for us hockey fans, there is a rudimentary way of measuring this luck, and that is by using a metric called PDO.
Just like the ECHL, the acronym for PDO actually doesn’t stand for anything. Oddly enough, PDO was the username taken by Brian King, the creator of the metric, for the now defunct website “Irreverent Oiler Fans.”
The formula for PDO is extremely simple, and can be used to evaluate both players and teams. It is calculated by adding together shooting percentage and save percentage.
PDO = SH% + SV%
Traditionally speaking, teams and players are expected to have a PDO that, over time, regresses to 100 percent. When the PDO of a player or team is above that threshold, it is believed they are playing lucky and should cool down soon. Conversely, if a player or team has a PDO below it, then they are perceived as being unlucky and are due for better fortune in the future. On rare occasions, we do see very elite players and teams possess a PDO of 101 or even 101.5 percent. That is truly sustainable over the course of a season, but anything above that can be treated as fool’s gold.
A prime candidate for a case study in PDO came to us this year in the ECHL by way of the Cincinnati Cyclones, who posted a phenomenal record of 51-13-5-3 for a total of 110 points, enough to win the Brabham Cup. They did this with a season PDO of 104.05 percent. To put it plainly, they were out of their minds lucky. I’ll break down how it all happened, but first a few disclaimers:

At the end of the 2018-19 ECHL regular season, most teams were hovering around the 100 percent mark when it came to their PDO, as expected. Cincinnati, on the other hand, was off on their own planet at 104.05 percent. Florida’s PDO of 102.4 percent was questionable, but to finish the season at such a high number as Cincinnati’s should be an enormous red flag to those who follow the league. When compared to all ECHL teams, it is even more astounding.

Examining the Cyclones’ season more closely, it becomes apparent they were riding a PDO wave throughout the entire year. High scoring games and blowout wins certainly attributed to their abnormally high PDO, but there is no doubt that some luck was involved throughout the season. In fact, after the 12th game of the year, their cumulative PDO never dipped below 103 percent, as illustrated by the following chart. 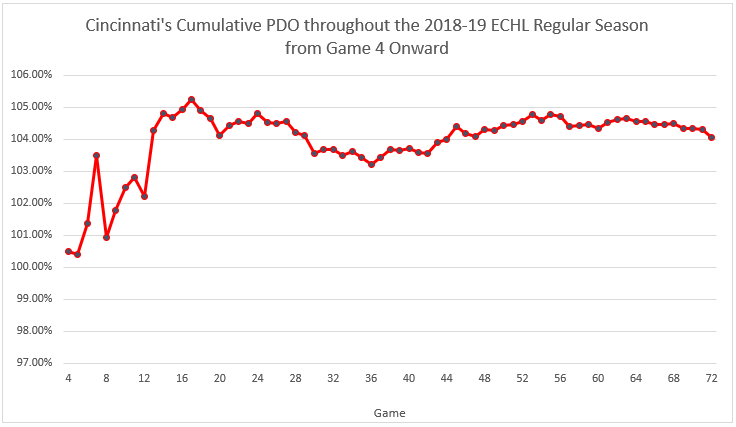 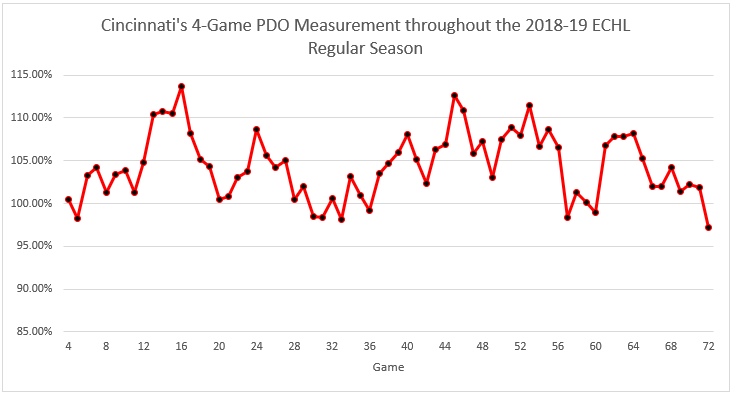 What stands out to me most of all is that at the very tail end of the season, it appears that their luck was starting to head downwards, specifically around game 64, right before the playoffs. A very inopportune time for luck to catch up with anyone. Unfortunately, for the Cyclones and their fans, this was the beginning of the end.
From game 64 onward, the Cyclones went 5-4 to close out the regular season. Certainly not bad, but not the usual domination they were accustomed to. The playoffs seemed to compound this fall to reality as Cincinnati endured a challenging six-game series against the Kalamazoo Wings, only to be stymied by a Kelly Cup Final-bound Toledo Walleye squad in the second round. A disappointing ending to what was a spectacular season, or an abrupt run-in with reality?
Interestingly, this trend isn’t anything new. Over the past few ECHL seasons, we have seen numerous first-place teams with a high PDO end their season short of the ultimate goal. Equally as intriguing, the most recent first-place team to end their season with an elite yet stable PDO won the Kelly Cup. So, when looking at the standings towards the end of next year, it may be smart to also calculate the PDO of teams, especially if it is your team that is in first.

Look for more of Mac Moore’s analytical analysis on TheSinBin.net throughout the 2019-20 season.