With the Rivermen’s victory on Sunday, the Cold War on 74 trophy was seized by them for the third time 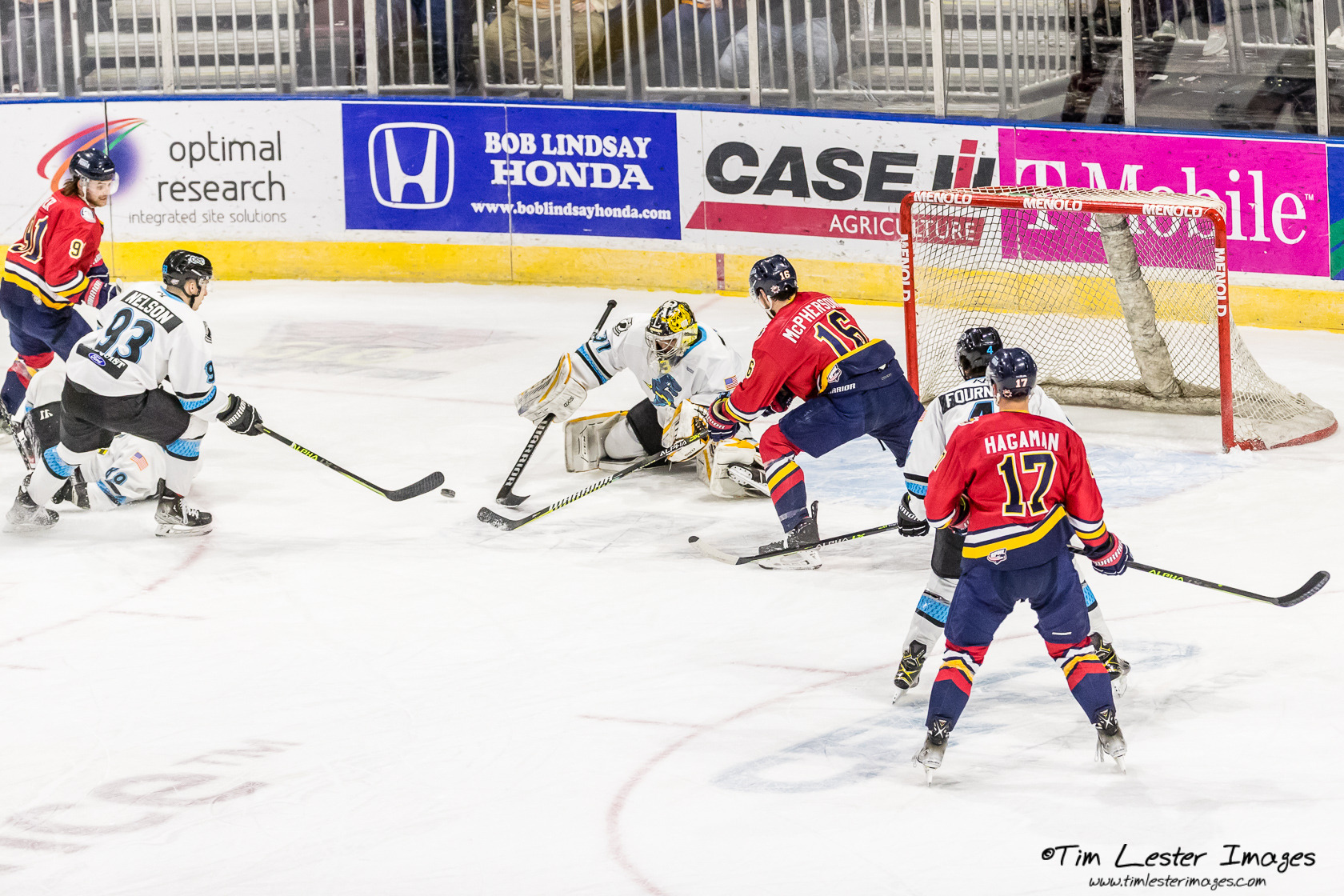 MOLINE, Ill. – The Quad City Storm faced off against their closest in-state rival this weekend with a home and home series against the Peoria Rivermen. With a final score of 9-4 on Sunday afternoon, it was a closer game than it appeared. Saturday’s contest saw both teams pick up a point in overtime, though the Rivermen took the second point just 30 seconds into the bonus hockey frame. With the Rivermen’s victory on Sunday, the Cold War on 74 trophy was seized by them for the third time, though two more games remain in the season-long 16-game series.

Saturday’s game was a low-scoring affair, in contrast to Sunday’s bout that saw as many goals scored in the first period as the two teams had managed in the entire game on Saturday. Saturday night the Storm went 1-for-2 on the man advantage, their first goal of the night coming midway through the opening frame while Charlie Pelnik sat for holding. The Rivermen power play unit would not be as effective, being held off the scoresheet the entire night.

“[The physicality] I think it was too little too late. I think with a crowd like that you need to show up in the first period and not wait until the third,” said Coach Dave Pszenyczny after Saturday’s game.

The physicality that was lacking on Saturday night from the Storm was in full effect on Sunday, as the Storm went from five penalties for 18 penalty minutes on Saturday to 12 penalties for 49 penalty minutes following an aggressive last 23 minutes of the game. The festivities started off with Michael Moran dropping the gloves when his team was down 5-2 with roughly two and a half minutes remaining in the second period. Moran wasn’t satisfied just fighting Ryan Patrick, however, as he then attempted to fight Lordanthony Grissom. After Grissom, Moran tried to continue the fight with Dale Deon, who did answer back enough to earn a roughing penalty. Moran was thrown out of the game with 17 penalty minutes, and he was joined six hockey minutes later by Tommy Tsicos who also earned five for fighting and a game misconduct for fighting Alec Hagaman, as Storm captain Taylor Pryce had already dropped the gloves to square off with Mitchel McPherson. By that point, the Storm were trailing 7-2, though they began the comeback a few minutes later and scored on the powerplay for their last goal of the game.

In an attempt to even the score, Coach Pszenyczny pulled Thomas Proudlock, who had replaced Kevin Resop in net following the seventh goal of the night, during the later man advantages for the Storm. This led to two short-handed empty-net goals for the Rivermen to give them the 9-4 victory.

“We needed goals. And you know what, I thought we were possessing the puck well. It’s really unfortunate we didn’t get the bounces tonight,” said Pszenyczny Sunday.

“It just seemed that the no-goal call to make it 3-2 for us was a momentum shift and it didn’t get called, and then when we get down to it Ortiz has a wide open net and his stick breaks. And they just throw it blindly and it rolls in the net, right? So, just one of those games where everything went wrong. With the bounces, with the injuries, you name it, it happened tonight. Can’t complain; the boys competed hard and they finished hard, so there was no give up. At the end of the day, it is what it is. Just have to move forward,” Pszenyczny continued.

With the Storm’s loss and the Fayetteville Marksmen winning, the Marksmen have now clinched home-ice advantage for the first round of the playoffs as the fourth seed. The Storm will have three more games to play before the end of the season, two of those coming against Peoria.