The power play is an enormous part of hockey, but what made Wichita’s power play best in the ECHL last season despite being a sub-par team?

Obviously, the power play is an enormous part of ice hockey, and it’s my favorite part of the game to strategize. From defensive zone breakouts to neutral zone regroups and offensive zone setups, playing with a man advantage is more than just trying to find an open man for a goal. In 2018-19 ECHL season, 22% of the 6,080 goals scored in regulation or overtime were power play goals. Last season, no team was better at maximizing their power play opportunities than the Wichita Thunder, who scored on 64 of their 265 power play opportunities for a rather impressive 24.15%.
Of those 64 power play goals, here is a breakdown by power play scenario:

Expanding further on these goals, there are a few things that I noticed as to what drove success on Wichita’s power play last season.

In short, these two players were point-grabbing machines last year on Wichita’s power play. Both garnered most of their power play points from assists, as is depicted in the table below, and both had points on over 40% of Wichita’s power plays. Texeira specifically got 31 of his 46 points this past season on the power play, with most of those (17) being secondary assists. While it’s known that secondary assists aren’t as valuable as primary, it should be noted that Texeira is a defenseman and had the responsibility of quarterbacking this power play. As for Iacobellis, he appears to be a much more even-keeled player, scoring almost at will in both power play and even strength scenarios. Over this past season, he scored 65 points in 58 games, with 27 of his points (8G, 8 A1, 11 A2) coming during power play time. 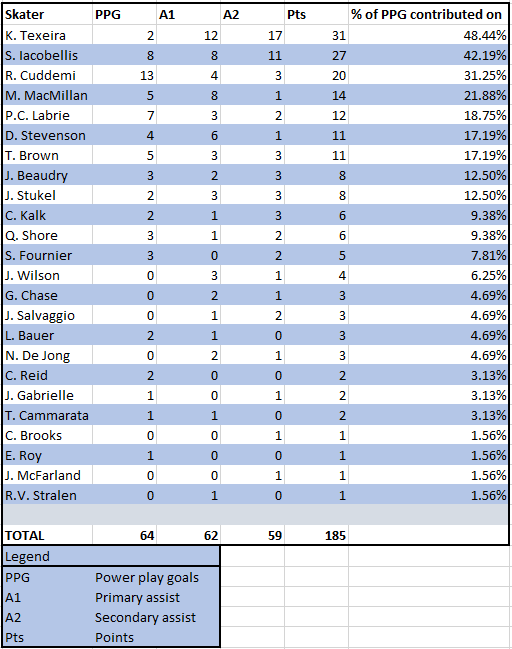 Here is a video clip that greatly shows how Texeira and Iacobellis were so effective on the power play.

In this clip, we see Wichita enter the offensive zone, fire a blue line shot, and settle into a 1-3-1 formation just before Texeira passes to Iacobellis. Iacobellis then darts a beautiful cross-ice pass to Cuddemi. This is a textbook play, and one that illustrates their roles perfectly. Texeira is again at the point and becomes the deciding factor on how this play initiates. After Texeira passes to Iacobellis, Iacobellis has two primary options: he could either skate with the puck to try and get a shot off close on net, or he could pass cross ice to Ralph Cuddemi. He takes the latter option, and elects to make a quick pass to Cuddemi, who then buries a goal. Fast and precise execution on this play leads to a goal that gives Wichita the lead during the third period.

Both options worked effectively for Wichita, as they seemed to gain the offensive zone rather easily while on the power play. In the video below, watch and notice how Wichita often enters the offensive zone with speed. The final two clips in this video highlight the drop pass method they incorporated, as well.


Another thing to notice in these video clips is that once Wichita enters the zone, they either immediately attack the net, or they set up in a 1-3-1 formation on the power play. Wichita’s skaters did a great job of recognizing when they had an opportunity to attack the net, and when it would be smarter for them to just set up a power play formation for a better opportunity.

3. WICHITA’S SCHEDULE AND THE MOUNTAIN DIVISION

Arguably the largest reason why Wichita had such success on the power play this season was their schedule and the fact that they play in the Mountain Division. Like all ECHL teams, the schedule Wichita had was dictated by divisional play. Since this is the case, teams primarily play others that are geographically closest to them. Unsurprisingly, the teams that Wichita played most last season were Allen (14 games), Tulsa (13 games), and Kansas City (12 games). All three of these teams ranked below average in penalty kill percentage this past season, and the Mountain Division ranked last in penalty kill percentage among all divisions. In addition, the Mountain Division was the most penalized division, and therefore penalty killers were probably being worked far more than in other divisions. This led to a very beneficial combination for Wichita when it came to their power play successes.

While the Thunder did have a strong power play strategy (and key players helped them convert on multiple opportunities), it would be foolish to ignore their opponents when it came to their power play success. I’m interested to see if scheduling will play a role in power play success next season for teams in the Mountain Division, as the rough and tumble style of play the Mountain is known for will almost certainly not go away during 2019-20.
Follow Mac Moore on Twitter (@LawMacMoore) for further ECHL analytical musings and more!