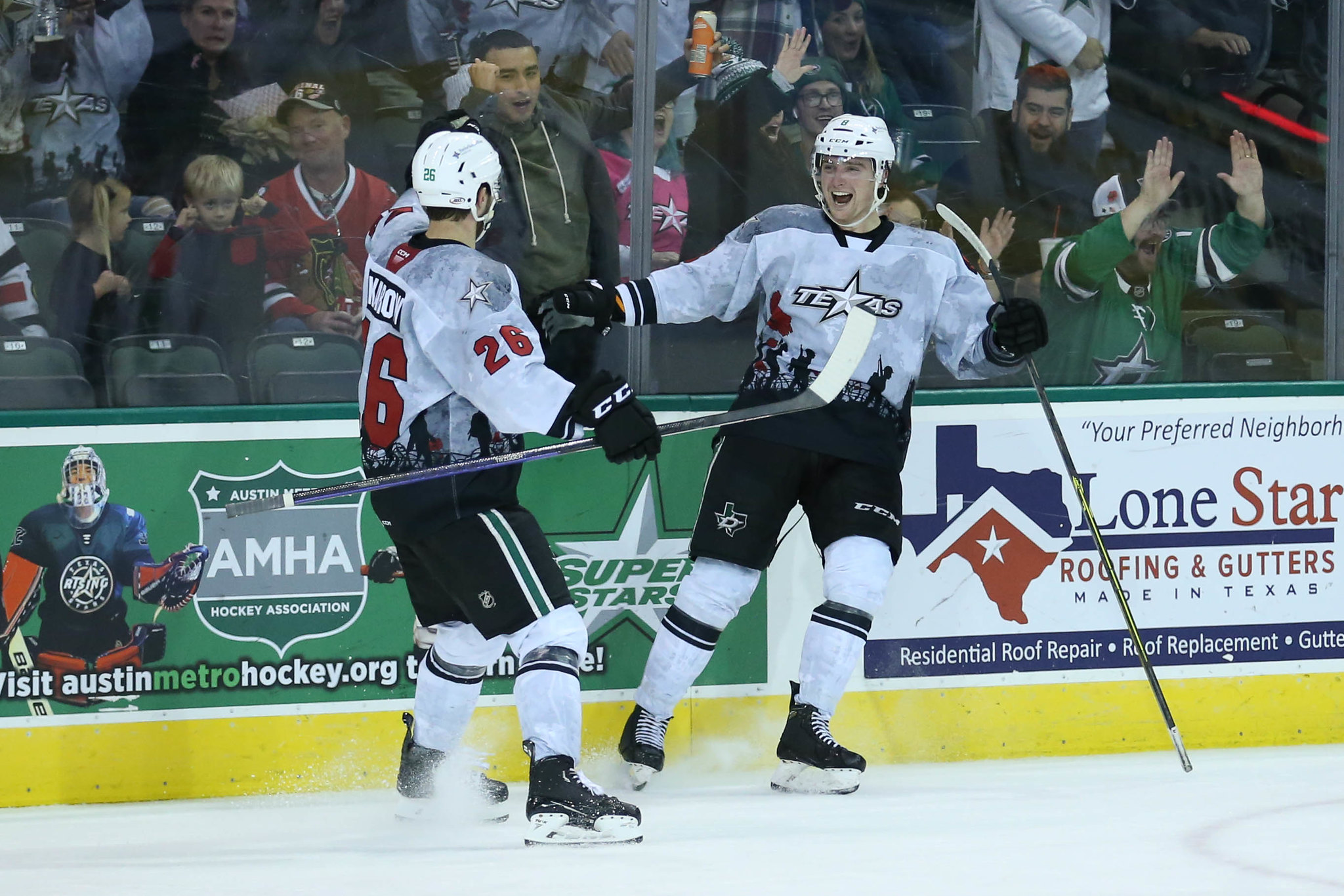 CEDAR PARK, Texas – On Saturday night, the Stars returned home to host the first of four consecutive games at the H-E-B Center. This weekend’s series featured the visiting Rockford Ice Hogs, who were anxious to pick up some points on the road. Despite falling behind early on, the Stars answered with an emphatic second period and rode the momentum to a 3-2 win.

Slow starts may or may not be a thing for the Stars. The Stars fell down early due to a sloppy goal from Cole Guttman about halfway through the first period. Eager to recover, the Stars answered back with a relentless forecheck and great stick work. Though unable to answer in the first 20, the Stars took over in the second. Shot after shot was turned away and it felt as though it would be one of those nights where the team was snakebitten. That feeling lasted until 10:44 of the second period when Fredrik Karlstrom broke the ice, burying a rebound. Ecstatic to get off the schneid, Karlstrom celebrated with purpose, jumping shoulder first into the glass in front of a crowd of 6,500 screaming fans. The party didn’t stop there. Exactly 90 seconds later, Thomas Harley scored his first career shorthanded goal to give the Stars a 2-1 lead. The pressure ramped up from there. The Stars maintained offensive zone pressure through the end of the period and were rewarded with an insurance goal. Following a defensive zone breakout by Ben Gleason, Marian Studenic lasered a shot into the top right corner over the glove of Dylan Wells.

Holding a 3-1 lead with 20 minutes to go, the Stars went into shutdown mode and executed to perfection. That was until Rockford pulled their goalie for the extra attacker. During the 6-on-5, Brett Seney redirected a shot from the wing into the net. With two and a half minutes to go, the Stars clenched their sticks a little tighter but were able to cling to the one-goal lead to the final buzzer, improving to 6-4-2 on the season.

Saturday may have felt like a slow start thanks to an early power play for Rockford that accounted for seven shots on goal. When asking Head Coach Neil Graham if he felt his team came out of the gates a little off, he said “We didn’t.” This was Rockford’s first game since Sunday, November 6th. In that time, the Stars have played three games, and Saturday being the fourth. All things considered, the Stars performed and got the result they needed.

The fourth line deserves quite a bit of love for their performance in this game. Riley Tufte and Rhett Gardner set the tone with their physical play and hustle to the puck. Thanks to their penalty-killing prowess, they created a prime chance for Harley to rip one in for the lead. This, coupled with the overall strong play, has to provide some bit of confidence for the squad here in the early going.

The team is relatively hot out of the gates and seems to have their feet underneath, a feeling we didn’t get until springtime last season. The team has solidified its goaltending position and has only had to make minor adjustments to its lines during the early season feeling-out process. Spirits have to be high going to Sunday’s series finale, where the Stars will go for their first series sweep on home ice this season.