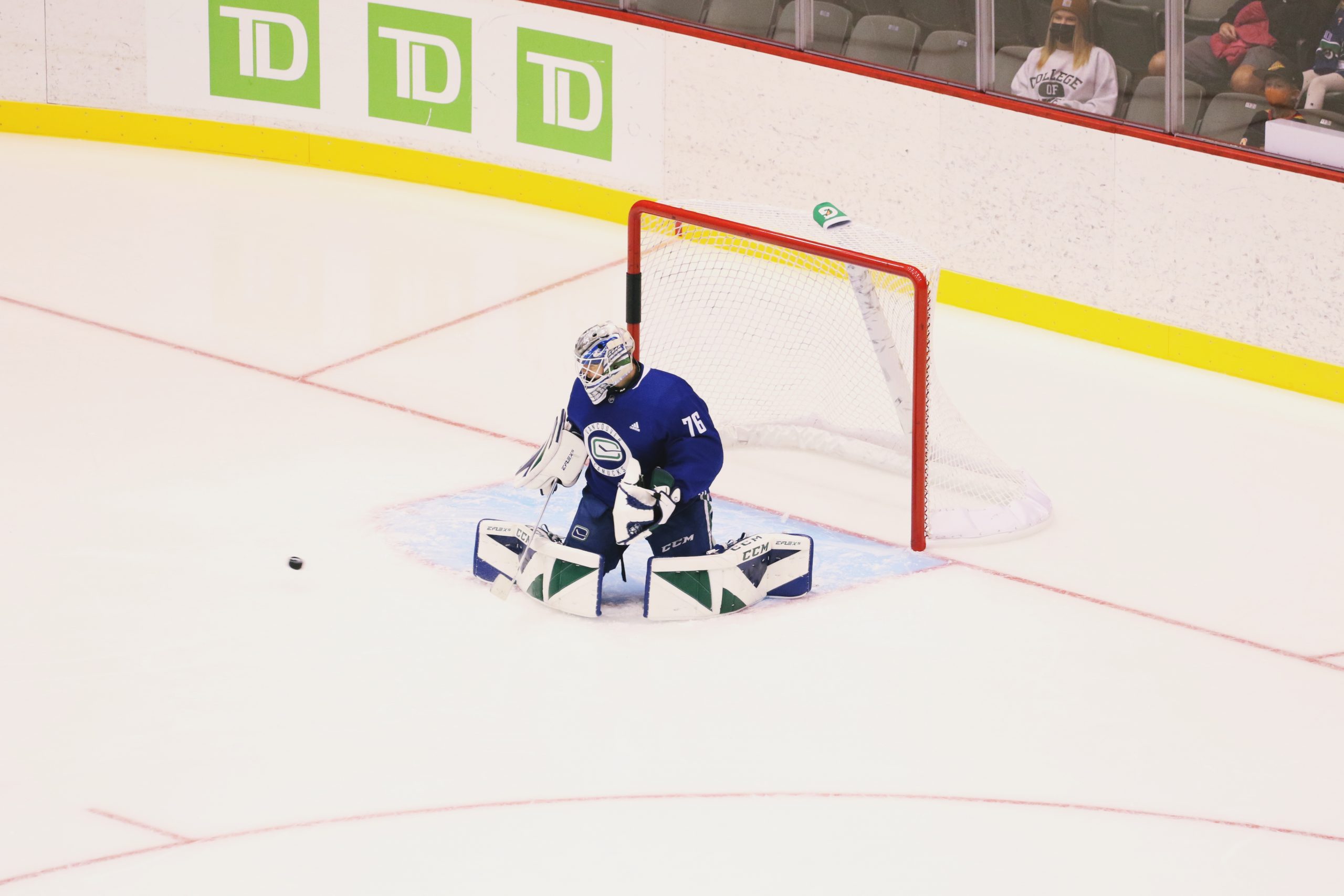 the Abbotsford Canucks have claimed their first victory in franchise history, topping the Ontario Reign 3-2 in a thrilling shootout

VANCOUVER, BC – It took them two games, but the Abbotsford Canucks have claimed their first victory in franchise history, topping the Ontario Reign 3-2 in a thrilling shootout.

With no rest as the team headed down from Bakersfield, the Canucks began preparing for a tough contest. They would be facing off against a very good Reign squad, complete with former league MVP Martin Frk.

Before puck drop, a bombshell was dropped. Arturs Silovs, the 2019 Vancouver sixth-rounder, would make his first AHL start of the year. He got one game with the Manitoba Moose last year, but this would be his first action in Canuck colors.

#ABBvsONT | Confirmation of Silovs in net. He was the first goalie off the ice. Otherwise, same lineup as last night with Brubacher in for Kannok-Leipert. Puck drop about 5 minutes away. #AbbotsfordCanucks #Canucks https://t.co/60sJMEeHoW

It was the Reign that seized the initiative early. Starting out strong, they pelted rubber at Silovs who stood tall and firm. He allowed the Canucks to slowly play themselves into the game, managing to find their legs and get better as the period wore on.

If Silovs continues to make saves like these, his name will never be misspelled again ?? pic.twitter.com/kgUcgu08N8

The second line of Di Giuseppe–Focht–Lockwood proved to be a very effective one through the first frame, generating the best chances with speed and skill. In an otherwise quiet first period, the teams really lacked an edge or energy, finishing with a 0-0 scoreline.

However, as the second period got underway, the Canucks would come out of the gates with an early powerplay opportunity. Though the unit could never get set up properly, in the waning seconds it was Danila Klimovich scoring for the second game in a row.

It was the first powerplay goal in franchise history, as the 18-year-old is rapidly making his name known in North American hockey.

The goal didn’t provide much in terms of momentum though, as only three minutes later the Reign responded. Some sloppy coverage in the neutral zone allowed them to rush in on a three-on-one, and Alex Turcotte simply redirected the puck past a sprawling Silovs. All of a sudden, it was all knotted up.

Frk and his line began to take it to the Canucks, skating literal circles around the offensive zone. At times, the puck movement and speed of the Reign made it seem like they were on a powerplay.

The Canucks’ best player in the period was Phil Di Giuseppe, and it was him that gave the lead back to the visitors. Circling up at the right point, the former Ranger threw a shot on net, finding a gap between Ingham’s wickets.

Phil Di Giuseppe sneaks one past the Ontario Reign netminder for his first goal with the #AbbotsfordCanucks! pic.twitter.com/A8s6KxgyEv

Three minutes passed again before the Reign found their answer. Off a routine dump-in on the powerplay, the puck took a very friendly bounce into the slot. Brayden Burke pounced on the chance and fired it past a very unaware Silovs.

The second would come to an end after some more sustained pressure by the Reign. Though the Canucks had their moments, Ontario was definitely calling the shots for the large majority of the game. Silovs was a huge reason why the game stayed all knotted up, and continued to be heading into the third.

Lockwood was missing from the Canuck bench, presumably due to an injury. In his place was Klimovich, who looked better than he did against the Condors. The kid was much more engaged defensively and showed more consistent bursts of his offensive talent. Of course, there were rough sequences, but progression was shown.

As for the Canucks, they managed to hang in there from the onslaught that Reign brought. Wagner and Frk in particular challenged Silovs plenty, but no pucks found their way into the back of the net. As the third wound down, overtime would be required at a minimum.

In OT, the Canucks would find themselves shorthanded right away. Madison Bowey took a slashing call that forced an important penalty kill from his team. Abbotsford admirably killed it off, but Ontario kept pressing, momentum firmly on their side. Only heroics from Silovs kept the Canucks in it.

With overtime solving nothing, the teams moved into a shootout. Klimovich, Bailey, and Stevens went for the Canucks, while Madden, Fagemo, and Turcotte stepped to the plate for the Reign. All of them missed, moving the shootout to sudden death. Frk’s attempt was snagged by Silovs glove, setting up Di Giuseppe to play hero.

Relive the moment Phil Di Giuseppe gave the #AbbotsfordCanucks their first ever win.

#ABBvsONT | Final Thoughts:
– Reign were the much better team at times during this game.
– Much credit to the Canucks for weathering the storm
– Klimovich rapidly improving each and every game
– A potential goalie controversy in the making in Abbotsford.
1/

#ABBvsONT |
– Eyes on Will Lockwood, who appeared to leave the game with an injury
– Phil Di Giuseppe was the best player all night for the Canucks
– Silovs relied upon early and late, picks up his first AHL win.
– Many sloppy sequences but improvement was shown.
2/

#ABBvsONT |
– Solid special teams for the Canucks, penalty kill holding strong and powerplay going to work.
– Need to gel together better, many missed connections could've cost them
– Reign punished them with speed – something that needs to be addressed.
3/

#ABBvsONT |
– Good win on the second half of a back-to-back.
– First franchise win!

That's going to be all from me, thanks so much for joining along. I won't be back for the Oct. 19th game, but count on more tweets during the home opener!#AbbotsfordCanucks #Canucks

With the win, Abbotsford moves to 1-1-0 on the season, as Silovs picks up his first AHL win with a 34 save effort. Up next is another date with the Reign, with puck drop set for October 19th at 7 PM.