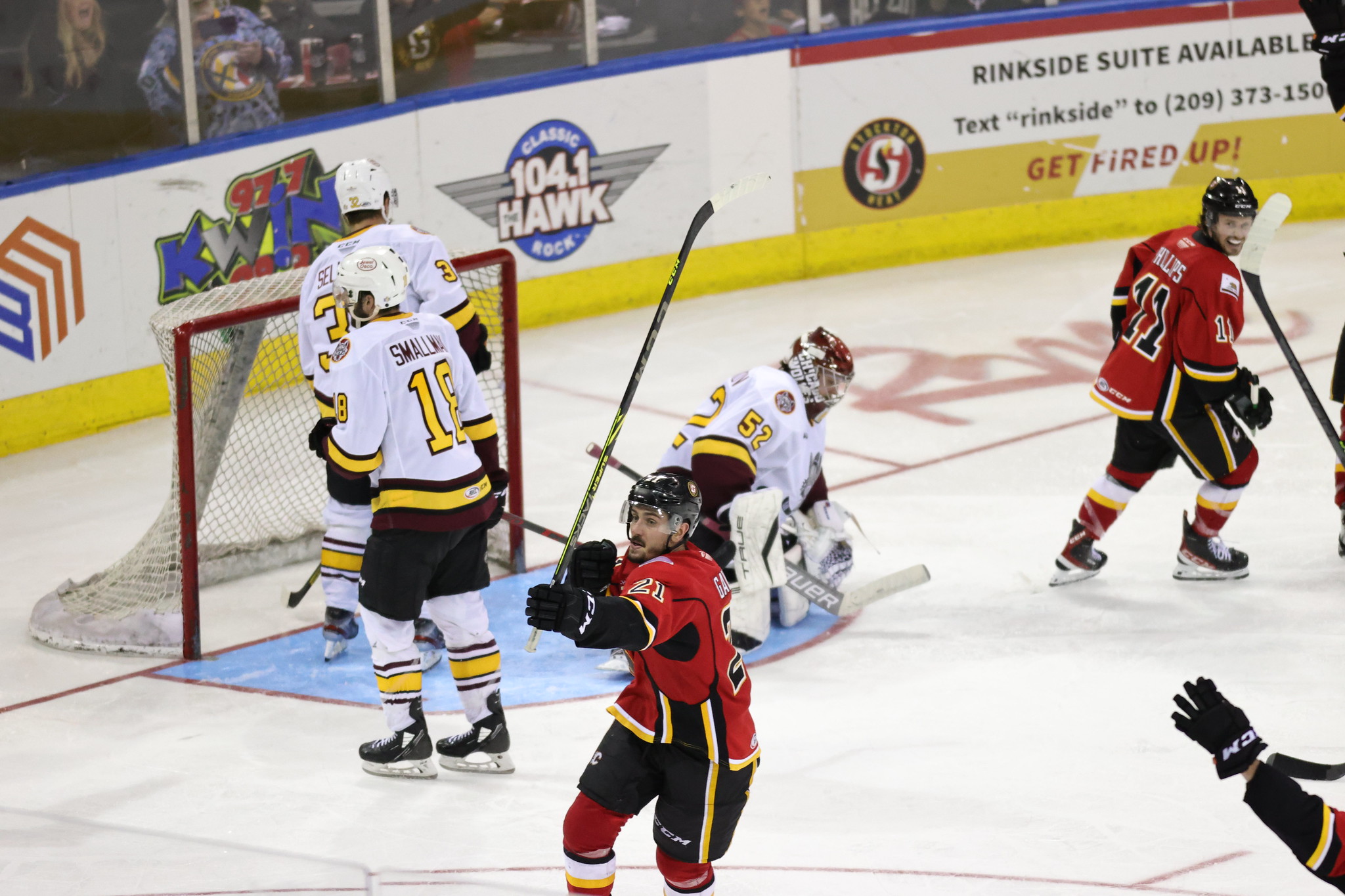 STOCKTON, Calif. – The high of 102 degrees in Stockton on Friday ought to have been an omen for anyone paying attention.

Heading into Game Four on Friday night, the Chicago Wolves held a 3-0 series lead over the Stockton Heat – a margin that was quite deceptive in terms of how close both teams had played one another. Chicago continued its rotation of netminders, leaning on Pyotr Kochetkov to get the start with a chance to clinch their ticket to the Calder Cup Finals. As usual, Stockton would respond with Dustin Wolf in net.

Despite falling behind by two goals in the third period, the Heat rallied to tie the game and then win in overtime 4-3 to extend the series for another game.

Chicago looked to strike first and take a stranglehold in this one, and the fresh legs of Jamieson Rees were able to draw a hooking call after missing Game 3 with an illness. The Wolves power play was able to hold possession in the zone and got a number of different looks before Jack Drury buried a rebound to give the Wolves the lead just 4:40 into the game.

The Heat came out with a purpose to take a swipe at every Chicago player within reach after virtually every whistle. Anything to be done to get the Wolves off their game. A series that didn’t contain a lot of post-whistle scrums suddenly had a lot of them as Stockton came out literally fighting for their playoff lives.

Other than Game 3’s shutout win, the Chicago netminding duo that has otherwise been spectacular this series has had a bad habit of giving the Heat a freebie and allowing them to tie games with it, and this game would follow that script. With the puck dumped down into the Chicago zone, Kochetkov came out of his net to play the puck. The Heat forecheckers caught up to him and Martin Pospisil had a wide open cage to deposit the tying goal on the gaffe.

Posp, lock and drop it pic.twitter.com/eKyQVU3rOE

The momentum swing was palpable – an early first period that Chicago dominated quickly turned to more Heat chances until the buzzer. Despite outshooting Stockton 18-11, the error cost Chicago the lead as the two teams headed into intermission tied 1-1. Wolf on one end was incredibly dialed in while Kochetkov looked to struggle with holding onto rebounds and just didn’t look comfortable in the crease.

Just under two minutes into this one and the Wolves would strike early again. Stefan Noesen on the half wall found Andrew Poturalski streaking down the slot, and the Wolves’ captain beat Wolf up high to restore the Chicago lead at 2-1.

Captain Andrew Poturalski gives the @Chicago_Wolves a lead in a crucial Game 4 of #CHIvsSTK. pic.twitter.com/hJ2hjoFUDm

Chicago poured it on offensively, looking for that insurance goal. Wolf made several high quality saves in tight and through traffic to bail out his team and again keep this game from getting away from Stockton. On the other end of the ice, Kochetkov made several big stops with the Heat trying to stuff the tying goal through his pads. The young Russian netminder looked to repeat his Game 2 performance, where he dialed in after allowing an early fluke goal as well.

Neither team could further break the seal of the other star goaltender and it set the stage for a third period showdown with the Wolves only needing 20 solid minutes to punch their ticket to the Calder Cup Finals.

The Wolves came out looking for the momentum early – an early breakaway for Richard Panik was swallowed up by Wolf, but Chicago would get another chance in the opening 5 minutes of a period and would cash in. On an odd-man rush, David Gust curled the puck past a sprawling defender and made a perfect pass to Josh Leivo with a wide open net, depositing the puck in for a 3-1 lead just 4:56 into the period.

The two-goal lead lasted all of eight seconds. Off the center ice faceoff, the Heat dumped the puck in and off a rebound it was Justin Kirkland scoring yet another huge goal for Stockton to take all the wind out of the Chicago sails.

The next ten minutes of the period Chicago virtually spent entirely on the penalty kill. Consecutive minors to Max Lajoie, Noel Gunler, and Spencer Smallman kept Chicago on the defense of a one goal lead and fully tilted the ice to the Stockton attackers. The penalty killers stepped up and killed off all three penalties but the Wolves were completely out of rhythm in a game where they had all the cards in their hand.

Down to the last minute and with the extra attacker on the ice Stockton’s continued pressure would finally find a way. Nick DeSimone got the puck through traffic and on net, and Glenn Gawdin would clean up the rebound with 48 seconds left to tie the game at 3-3.

All of the momentum was now firmly in the hands of the Stockton Heat and with the buzzer extra time was going to be needed to decide this one.

Heading into the extra frame for the second time this series, the Heat were looking to ride that momentum into OT and after a chance from Rees to almost play OT hero again, Jakob Pelletier had a partial breakaway in on Kochetkov until he was hauled down by Jalen Chatfield. Despite going 16-for-16 on the penalty kill all series, the Wolves just couldn’t stop themselves from giving Stockton more opportunities and after playing with so much fire they finally got burned. After three failed attempts to clear the zone, Gawdin was able to lift the puck past Kochetkov and send the fans home happy with a 4-3 win, forcing a Game 5 and keeping Stockton alive in this series.

Glenn Gawdin sends the @AHLHeat to OT and finishes it off to keep the Heat alive in the Western Conference Finals. https://t.co/EWAtarAt6S pic.twitter.com/38UakbXkKv

Game 5 takes place on Saturday night at 6 PM PST. If the Heat win, Game 6 will take place on Tuesday, June 14 at 7PM CST.