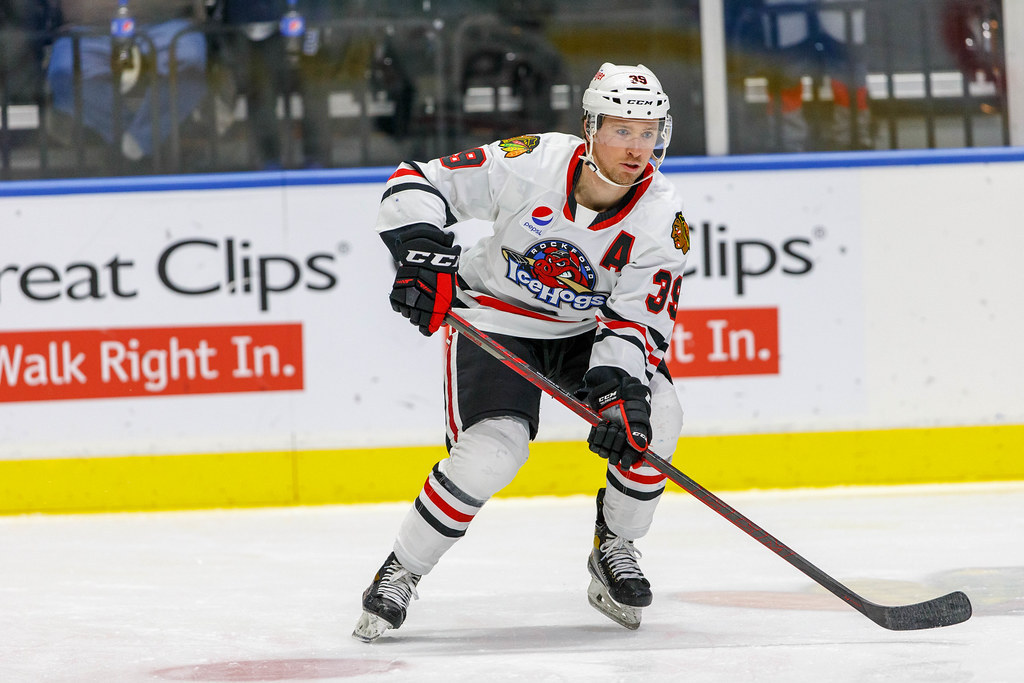 In his third full season of professional hockey, McLaughlin is showing that he has the game to be a solid contributor at the AHL level

Dylan McLaughlin has continued to be a big part of the IceHogs lineup this season. (Photo Courtesy: Todd Reicher/Rockford IceHogs)

ROCKFORD, Ill. – Rockford IceHogs center Dylan McLaughlin is one skater who is excited to resume the AHL’s schedule following the holiday break. In his third full season of professional hockey, McLaughlin shows that he has the game to be a solid contributor at the AHL level.

After returning from a ten-day stretch on the league’s COVID protocols, the Lancaster, New York native picked up where he left off. McLaughlin built a six-game point streak that ended last Tuesday when Milwaukee shut out the ‘Hogs.

“It felt good to be back, for sure, he said last week at Rockford’s weekly media session. “It was definitely a long ten days, but I’m glad it’s done with.”

McLaughlin came out of the lineup after contributing an assist in Rockford’s 4-1 win in Grand Rapids on December 3. After missing four games, McLaughlin returned to action on December 17 in Texas, scoring seven minutes into what became a 3-1 Rockford victory, nabbing first star honors.

“Maybe the first period of the first game I was a little tired,” McLaughlin admitted. “As the time went on, I felt really good, back to normal.”

McLaughlin’s 2021-22 season started a bit slowly on the scoresheet, but got a kickstart in a November 20 shootout triumph over the Chicago Wolves. He posted a goal and assist in regulation, then ended the contest with the lone shootout tally in round four.

In 18 games this season, McLaughlin has three goals and eight assists. When he was out of the lineup due to COVID, the IceHogs were 6-1-0-1 when he got into the scoring column.

He’s second among IceHogs skaters with 48 shots, including a season-high of eight on December 21 in the loss to the Admirals. Five of his helpers have come on the power play. McLaughlin is on the Hogs’ first unit on the man-advantage and also kills penalties.

McLaughlin came to the IceHogs after a four-year career at Canisius College, where he totaled 58 goals and 89 assists in 152 games. In his rookie year, he split time between Rockford (2G, 5A in 28 games) and the Indy Fuel (13G, 11A in 20 games).

The 26-year-old has steadily worked into a more prominent role in the Rockford lineup. McLaughlin was Rockford’s Most Improved Player recipient for 2020-21, leading the young Hogs in scoring with 22 points (8G, 14A) in 28 games.

Presently, McLaughlin has been paired on a line with D.J. Busdeker (2G, 5A) and Michal Teply. The trio has created a lot of scoring opportunities recently, though Teply is still looking for his first AHL goal.

“I’ve been playing with Buzzy (Busdeker), who I’ve played with a bunch in the last couple of years. I really enjoy playing with him a lot,” McLaughlin said. “He goes to the hard areas, gets pucks back. Taps (Teply) has been playing better as well. He’s skating well; he gets a grade A chance almost every game, so I think it’s going to pop in for him soon. As a line, I think we have some momentum and we keep building and we talk to each other all the time. It’s been fun.”

McLaughlin is happy to be back on the ice for Rockford, especially with the IceHogs beginning to pick up points on a regular basis. This week, four games on the schedule get the team right back to the grind.

“We’re all excited about it,” McLaughlin said regarding the Hogs December surge. “We’re playing the right way right now; I think we’re kind of finding what we’re good at. We’ve just got to keep building on that. We’ve got to take it one game at a time, obviously, but I know we’re all excited just for these games to keep coming and keep playing good.”

Rockford was supposed to resume their schedule tonight, but due to COVID protocols within the team, their game against Iowa has been postponed. The ‘Hogs are expected to return to action Thursday night against the Milwaukee Admirals.